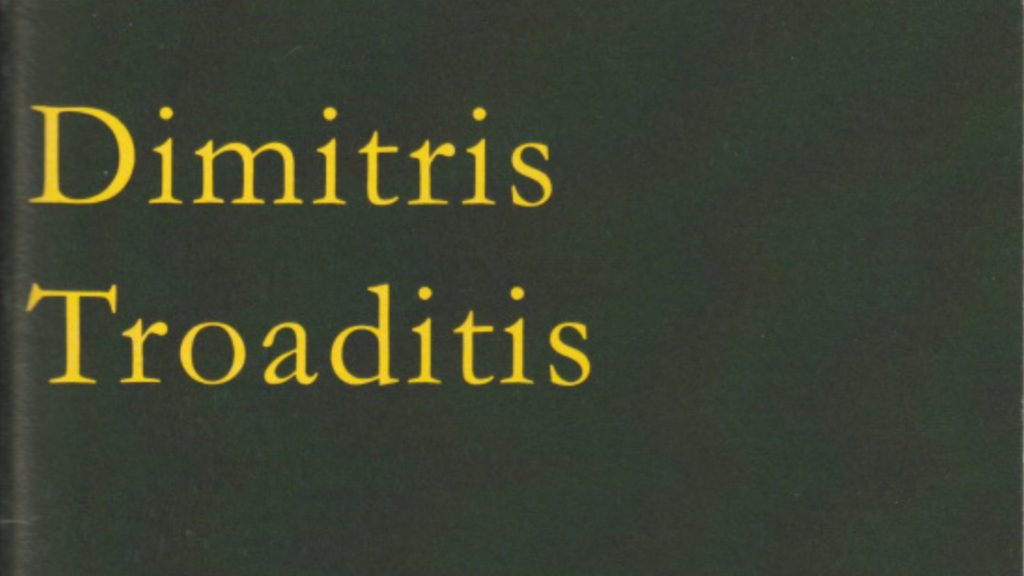 Ακροβασία, renderable in English as “tightrope walking,” literally signifies walking on tiptoes. In his recently released poetry collection of the same name, poet Dimitris Troaditis takes the reader upon a journey through a world poised precariously upon a knife edge, which one steps through unguided, at their peril.

Undoubtedly, the world of the text is a dystopian one, a world in crisis. We “discover the world through graves” (‘Tightrope Walking’), this being a cosmos where: “troubles, pains, generous receptions, constitute incidents in our lives,” (‘The Uprooting’), and where “murder [is] completed when the red of the sky become mauve and then black.” (‘As Blood’), imagery reminiscent of a bloody and bruised Stendhalian charnel house. Poised upon the ends of our toes, we walk “with chains . . . naked before slaughters/ at the dance of lies,” (‘Cohabitation’).

The poet’s blasted landscape of “polluted atmospheres,” (‘Faith’), where “counterfeit unforeseen” dominate “rhythms and symbols” (‘As Blood’), appears to be inimical to life itself. It is for this reason that the first poem of the collection ‘Tightrope Walking’ commences as a perilous journey and ends up as a manifesto: “Whoever doesn’t adhere to this poetry/ is buried alive/ by regimes of calamity/ in white posthumous circles/ with stones erected in the soul/ giving up the spirit in an unequal battle.”

Here then, in the “poetry of our bodies,” the interrelation of human beings, as defined by the poet, lies salvation. As a prophet of the chthonic and the urban, his are words of grit and gravel. Truths here are not to be discovered but, rather, to be constructed: “I want to construct a truth in my heart,” he proclaims in ‘As Blood’, “one I’ve been seeking for years now, in moments when I resignedly accompany my embrace.” There is no pacifism here. Even embraces are given and guided, rather than merely received.

Should we be deemed worthy to be initiated into the poet’s mysteries, he will “engrave [his] secrets on . . . our body and all those revealed to [him] by the sun [he] will stamp, and all those revealed to [him] by the birds [he] will draw,” (‘My Secrets’). The inference is that the poet’s insights are nothing miraculous. There are no novel revelations or original patterns of thought. Instead, his mysteries lie in the correct re-articulation of the cosmos, in all its proper constituent parts. Once this is achieved, a glimpse of a Lennonesque paradise is offered, where there is: “no more grief in the valley of thought/ no more souls in the feeble frost on sunrise.”

The main body of the poems were written prior to the poet’s arrival in Australia from Greece in 1992. Having borne witness to seminal political changes in Greece, the early poems are strident, self-assured and replete with revolutionary fervour. The poet’s confidence seems to ebb away by the time we arrive at the poem ‘The Uprooting’. Here, any sense of a linear progression is arrested and, in its place, a multitude of unanswerable questions are posed. Our perseverance may be imperishable, to paraphrase the poem, but what exactly is the product of such an endeavour? The former fervour of the early part of the poetic narrative, viewed in this disillusioned light, almost assumes the form of a cautionary fable. It is the “flame of a fancy which is extinguished after each awakening.”

Thus, in the next poem, ‘Terra Australis’ the poet, having left one reality for another, can only rail at his artificiality and especially that of those like him, who are caught between two ersatz cultures; the ontopathological issues of both not having been resolved, in a lament that is almost a fear at the failure of poetry itself: “So what is left of their own?/ A pruned apathetic language/ a fragmentary movement in infinity/ which also tends towards extinction?”

Where words defy or betray us, the old revolutionary, forged in the fires of the Heimat’s political upheavals will, Mayakovsky-like, “break” the false reality on the “anvil of assimilation.” “And who is the one that will revolt, setting fire to the fast food of culture?” he asks. The problem is, we are also no longer certain that the poet considers himself to be the man for the job.Everything seems too new, too raw, too disconcertingly familiar, and the secret crypt that absorbs his kin, too painful and labyrinthine to traverse. Nonetheless, the prophet, as a victim of the derailment of his own spatial and ideological journey, realises that there is no going back. Reality must be reconciled in the land in which he lives, not in an ambiguous state between the old and the new, for despite any official rhetoric about pluralism, in ‘On the Community’ he observes that: “The flashes of our star/ are not dually voiced.” In such a condition, recourse to tried and tested customs or insights from the old culture are not only cacophonous (“the untuned instruments. Of paleontological orchestras”), but positively fatal as well: “The return to holy landscapes . . . like being hung from a belfry/ as a harbinger of doom.”

By the time we get to the final poem of the narrative, ‘Wandering’ what we are treated to is a recapitulation of where we have come thus far with the poet.

His trials have taken their toll: “Something [has] broke[n] on the payment of our inner existence . . . / it cut us in two:/ a slivered moon and a pale truth.” While the annihilation of the self is usually a condition precedent in many creeds for enlightenment, in this dualistic, shattered, sundered form, is the poet no longer able to guide us?

Or does he perceive that we no longer need him, as he can no longer offer us any meaningful sense of direction? “What truth can we hide/ and which ship shall be board/ . . . when the tremors of this night/ do not allow us to experience/ the joy of life’s overflowing glass?” Either the poet is admitting defeat or ultimately shifting responsibility for social renovation and the hope of a rosy dawn upon the reader.

From our journey together, what we do know is that any further voyage in this direction will be anything but painless, for we called upon, albeit grudgingly to defer pleasure, for the greater good.

Citing Yiannis Ritsos and Tasos Leivaditis as his great influences, the poet’s own style is unique, bearing no relation to either. His words drench the page with the force of a torrent.

Expressions, images swirl and eddy around each other, often incongruously, threatening to sweep away the reader upon their contrapuntal tides. In so doing, the poet is artfully conveying to us, the bewildering force of modern urban life itself, and assails us with all its “rains and hurricanes” (‘My Secrets’), its contradictions, its injustices and iniquities. Indeed, he comes to personify that which he wishes to reform.

The poems that comprise this singular narrative, which are presented in the original Greek and in an English form rendered by me, a unique privilege, ultimately accept that the existential problems they seek to address cannot be solved by one person alone, nor should one expect a solution to emanate from any self-appointed guru. Instead, the poet, in keeping with his social philosophy, fully admits that it is only through the communal struggle of his readers that the requisite capacity can be achieved. In producing poetry of such force, refreshing candour and immense sensitivity, the poet’s approach to the fundamental questions of modern society are truly unique within Greek Australian poetry.