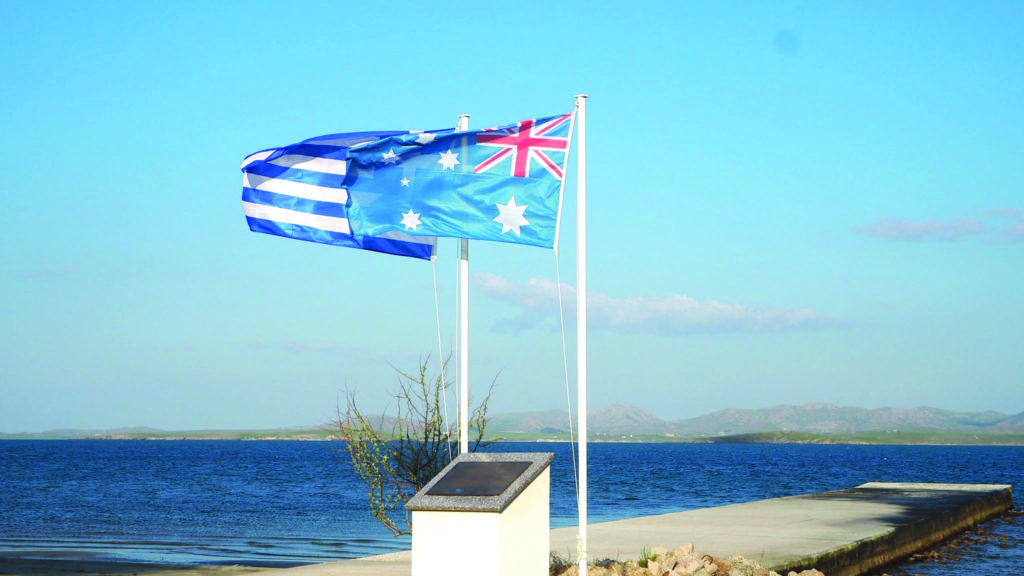 This took place following the unveiling on 20 April of the new memorial on Lemnos commemorating the Australian Pier near Mudros. The pier was built by Australian soldiers and engineers in March 1915 as part of the transformation of the island into the advanced base for the Gallipoli campaign.

The discovery of the pier was reported previously in Neos Kosmos.

In their joint announcement, Evagelos Giarmadouros, Sub-Prefect for the Northern Aegean, and Lee Tarlamis, president of the Lemnos Gallipoli Commemorative Committee, stated that the creation of this heritage trail is a vital new step in not only commemorating Lemnos’ link to the Gallipoli campaign, but also in facilitating awareness of the link to a new generation. 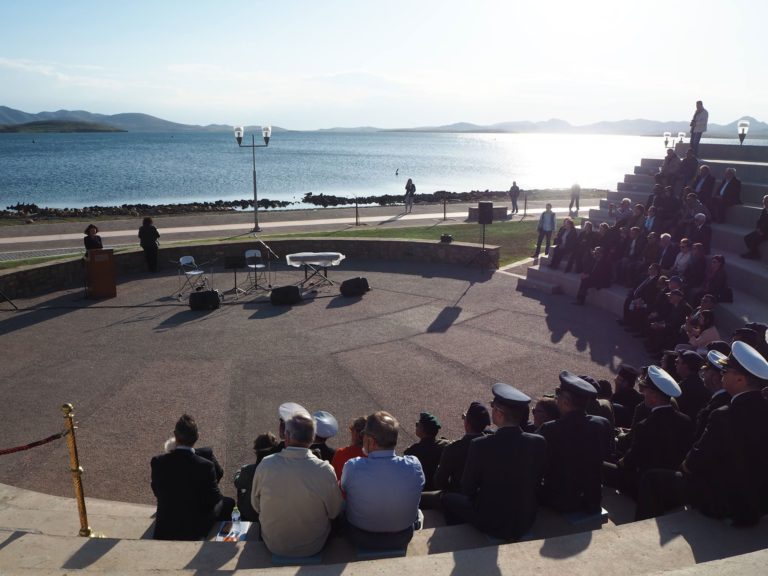 “Our committee has worked for many years to build awareness of the Lemnos’ link to Anzac in both Australia and Greece. The creation of the trail will be the culmination of this work and we look forward to working with the Lemnos authorities to make this a reality,” Mr Tarlamis said from Lemnos.

Mr Giarmadouros said that the trail would assist Australians to walk in the footsteps of their forebears who came to Lemnos over 100 years ago.

“The Lemnos Gallipoli Heritage Trail will form a bridge between Australia and Greece – as well as those from the other nations connected to the Gallipoli story – and build greater understanding of our joint heritage. There are many bonds between Lemnians and Australians and I know that this initiative will be welcomed both on Lemnos and in Australia. I look forward to working together with the Lemnos Gallipoli Commemorative Committee to bring this trail to a reality,” he said.

This year’s Anzac commemorations on Lemnos took place on 20 April, attended by over 200 people, from both near and far. Present were the Australian Ambassador to Greece, other consular and parliamentary dignitaries and senior representatives of the Hellenic Armed forces, including Vice Admiral Ioannis Pavlopoulos, Commander in Chief of the Hellenic Fleet, who travelled from Athens for the event.

A delegation of the Lemnos Gallipoli Commemorative Committee travelled from Australia to take part in the events led by Mr Tarlamis and myself, and included Deb Stewart, the granddaughter of Sister Evelyn Hutt who served on Lemnos in 1915, and Malcolm MacDonald, who has written about Lieutenant William Davis, a former Victorian trade union official who served and died at Gallipoli.

The commemorations included a formal service at East Mudros Military Cemetery, a short service at Mudros’ harbourside Anzac memorial, a historical presentation by Vassiliki Chryssanthopoulou and a visit to the impressive Lemnos Gallipoli display at the Maritime Museum at Mudros.

Mr Tarlamis laid the wreath of the Lemnos Gallipoli Commemorative Committee during the service at East Mudros. However the main feature of this year’s event was the unveiling of the Australian Pier Memorial at Aghios Pavlos north of Mudros. The proposal to build this new memorial grew out of my own research into the story of the Australian Pier and its erection was jointly funded by the Victorian Government, the Prefecture of the Northern Aegean, the municipality of Lemnos, and the Lemnos Gallipoli Commemorative Committee. At the invitation of the local authorities, Mr Tarlamis gave the keynote address at the memorial immediately prior to its unveiling.

The commemorations concluded with an event at Mudros’ new amphitheatre which looks out across Lemnos’ great Mudros Bay. Amongst other presentations, it was my pleasure to address the assembly telling the story of my discovery of the Australian Pier, from an obscure reference on a naval map held in the British Library in London to the archives of Australian military units that served on Lemnos held in the Australian War Memorial in Canberra.

I thanked my colleagues in Greece, Dimitris Boulotis and Liza Koutsaplis, for assisting my research into the Australian Pier.

And how appropriate it was to give this address in a re-created traditional classical Greek amphitheatre looking out across Mudros Bay, which was filled with over 200 Allied ships on the eve of the landings at Gallipoli 103 years ago. During their visit to Lemnos, I took members of the commemorative committee on a day tour of the island’s key Anzac sites and some of the villages visited by the Anzacs in 1915. Ms Stewart was particularly moved to walk on Pundra in Moudros Port (known as Turks Head Peninsula in WWI) where her grandmother was based during the Gallipoli campaign.
Mr Tarlamis thanked the local authorities for their efforts in putting together this year’s commemorations.

“We have been participating in the annual commemorations on Lemnos for a number of years now and I can say that this year’s events were truly one of the best. It was an honour for me and our committee representatives to take part in the commemorations. I especially want to congratulate Mr Giarmadouros and the Prefecture of the Northern Aegean as well as the mayor of Lemnos Dimitrios Marinakis for their efforts and their welcome to their beautiful island,” he said.

This year the Victorian Government has provided $5,000 in much needed assistance to Mudros Senior Secondary College on Lemnos, which will provide two state-of-the-art projectors and other educational aids for students. This school has actively participated in the recent visits to Lemnos by Victorian secondary students as part of the Victorian Premier’s Anzac Student Prize program.
Director of the school, Stylianos Karagioannis, welcomed the assistance. “I look forward to continuing the links between my students and those from Victoria. Such interaction is an important part of our education program, opening our students’ eyes to the world beyond our island and to appreciate the Anzac connection to Lemnos,” he said.

Christina Despoteris, the committee vice-president, has recently held discussions with both schools to make this a reality.

Ms Despoteris reported that the principal of Albert Secondary College not only supports the proposal to link both schools but is hoping to visit Lemnos with a delegation of his students during the coming commemorations of the centenary of the Armistice of Mudros to be held on Lemnos in early November later this year.

“Our committee is so pleased to have been able to facilitate this link between Victorian and Lemnian secondary school students. These sorts of connections are vital to preserving awareness of Lemnos’ link to Anzac in future generations,” Ms Despoteris said.

The visit by Albert Park students will coincide with the special Victorian Premier’s Anzac Student Prize Alumni Tour to Lemnos during the Armistice commemorations. This will be the first time that the Armistice – which brought an end to the war between the Allies and the Ottoman Empire – will be commemorated and the first of an annual service on Lemnos and in Australia. On behalf of the committee I have successfully proposed the establishment of an annual commemorative service at Melbourne’s iconic Shrine of Remembrance – designed in the image of the Mausoleum of Halicarnassus – the first service to take place on the centenary of the Armistice’s having come into effect, at 12 noon on 31 October this year.

It is hoped that the progressive creation of the new Lemnos Gallipoli Heritage Trail will form the beginning of a new Anzac trail throughout Greece from Lemnos, through Thessaloniki, down through mainland Greece to the Peloponnese, to Crete and across the Aegean – linking the key Anzac and other Allied related site from WW1 and WW2.

The Lemnos Gallipoli Commemorative Committee and the Prefecture of the Northern Aegean have now commenced the planning for the creation of the Lemnos Gallipoli Heritage Trail, including a number of additional memorials commemorating significant locations in Lemnos’ link to Anzac and other related initiatives.

The committee has also extended an invitation to the regional and local Lemnian authorities to visit Melbourne and our Lemnos Gallipoli Memorial.

* Jim Claven is a historian, freelance writer and secretary of the Lemnos Gallipoli Commemorative Committee. He discovered the story of Lemnos’ Australian Pier during his research and writing of the forthcoming publication ‘Lemnos and Gallipoli Revealed’. This book will be released later this year. He is currently travelling in Greece to participate in a number of Anzac-related commemorative events. Mr Claven thanks Hotel Ethaleia and Petrides Travel for assisting with his stay on Lemnos. For more information contact Jim at jimclaven@yahoo.com.au.