Kick off is at 7.00 pm this evening at Olympic Village, Heidelberg 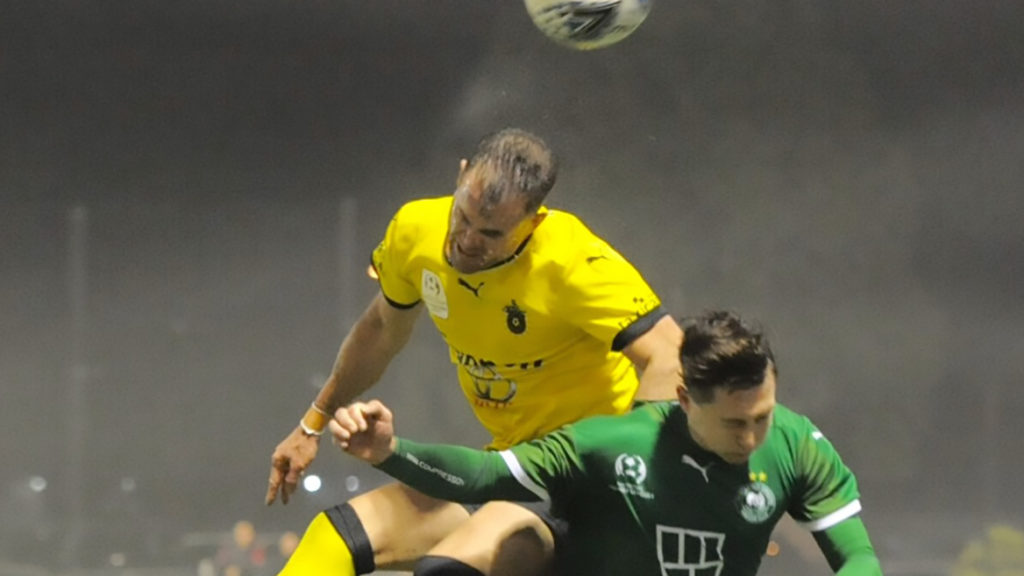 This weekend gives football fans the chance to enjoy one of the biggest rivalries in Victorian football, the Heidelberg and South Melbourne derby.

The Bergers are hosting this evening’s latest edition in front of what is expected to be a bumper crowd at Olympic Village, and as part of the Heritage Round, Heidelberg will honour its past in this its 60 th anniversary year.

The Bergers’ players will wear a specially designed heritage strip and in a ceremony preceding the kickoff, a procession of past Heidelberg United players will lead out the club’s first president Mr George Baniscas.

For South Melbourne coach Sasa Kolman, it will be his first ever South –Heidelberg derby in charge but he’s well aware of the passion and excitement generated by this particular derby which spans the history of the sport in this state from Old Soccer to new football. Speaking to Neos Kosmos, Kolman said in the lead up to the match, “ It’s a great occasion, because games like that give spice to the whole competition, not just for South and Heidelberg. This is exactly why football as a sport is exciting, because of games like this.” The two teams go into the match with contrasting starts to the season with the Bergers flying off the blocks with six straight wins, but South having struggled with just two wins from their opening eight games. Ironically, the Bergers enter this match on the back of its first loss of the season last week to another fierce rival, Bentleigh Greens whilst South recorded a much needed win away to Hume City.

South’s cause hasn’t been helped by having to play all but one of their league matches so far, away from home, but also by the fact that they’ve lacked the depth to cover several injuries and suspensions. The Lakesiders will again have to make do without key players in the match against the Bergers.

Leading goalscorer Milos Lujic, still has four of a five match suspension to serve, whilst forward Leigh Minopoulos and skipper Brad Norton are also likely to be unavailable due to injuries. Because of the missing players, Kolman says “ We’re just trying to fill the positions up front with players that don’t usually play in those sort of positions.”

However one player who is relishing a new role at South this year is Nick Epifano who has been a creative fulcrum in the middle of the park. In the derby tonight, his battle with Bergers’ tyro Jack Petrie could be a decisive one in the overall contest. Kolman says, “Nick is playing in the middle since I took over. He’s really excelling at the moment. I think it’s his best position. He’s really playing different football from what we’ve been used to from him. He loves it. Everyone’s very excited seeing him in the middle.”
Other key players who South will be looking for leadership in the heat of battle are the two Matts, Foshini and Millar and Kristian Konstantinidis.

Kolman says of the Bergers’ team, “They’re a very strong and physical team. We just have to be strong on the day and give absolutely everything because they can punish you very quickly. We just need to be winning all those second balls and 50-50 challenges. They’re a team that don’t really allow you to make mistakes. We just have to be very focused.”

Heidelberg will be a huge test for South Melbourne. Kolman says, “ Obviously you always want to come out as a winner because the rewards are amazing. You make your fans happy. It would be a massive boost for us if we could steal three points on Saturday. Beating Heidleberg away would mean that we show everyone that we were just unlucky at the start of the season. Obviously we’ve had a lot of problems with injuries and suspensions. Kind of depleted squad at the moment. Whoever steps on that park in a blue shirt, need to give absolutely everything for the club.”

“It’s going to be a great game. It’s one of those games that makes this comp interesting. I’m sure not only South and Heidelberg supporters, but people from outside as well are going to be happy to watch this game.”