Calling out sexual harassment in the workplace

Varvara Ioannou, founder of the FFTN, is continuing the very important dialogue and giving migrant women a voice in the #MeToo movement 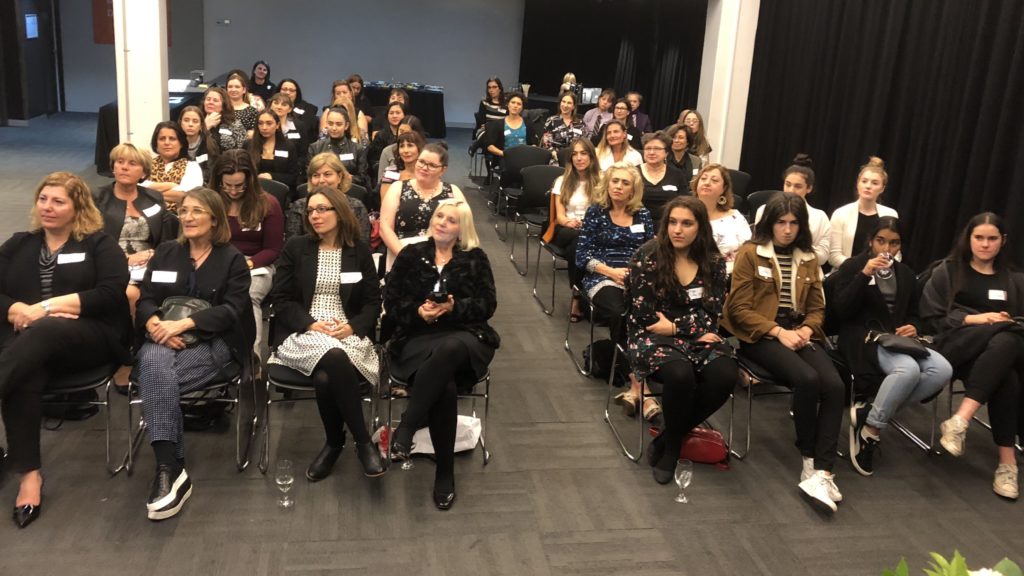 Sexual harassment in the workplace is a tough terrain to navigate for victims, and when they happen to be from a marginalised minority, such as a newly arrived migrant or living with a disability, this is amplified ten-fold.

The Greek culture is just one of many that maintains gendered stereotypes, and so when women of the community find themselves in compromised positions, we can often see women second-guessing themselves, and, from habit, we are all often more concerned about accommodating male culprits than calling out unacceptable behaviour.

To get the conversation going, and raise awareness about the processes in place to protect victims, and achieve justice, the Food For Thought Network (FFTN) hosted an insightful panel discussion at the Greek Centre on Wednesday evening.

Championed by founder Varvara Ioannou and her team, the event commenced with a presentation by Natalie Hutchins MP, who holds a number of portfolios in the Victorian Government including Minister for Women and Minister for the Prevention of Domestic Violence.

A supporter of gender equality, she kicked off with a personal narrative of harassment while working as a 17-year-old in an Italian restaurant. This was one of many such instances familiar to and shared amongst the women gathered throughout the night.

“Of course sexual harassment in any form is unwelcome behaviour because it’s often offensive, humiliating and intimidating to women and quite frankly against the law,” said Ms Hutchins.
“Over the last year we’ve seen women unite in solidarity and sharing their experiences and demanding that the stories of sexual harassment and abuse at home, in our workplaces, on university campuses, in the public sphere, are dealt with seriously and believed.” She touched upon the challenges women face in coming forward, and those in the public eye who are time and time again mistreated by the media, referring to the recent experiences of Melbourne City Councillor Tessa Sullivan who accused former Lord Mayor Robert Doyle of sexual harassment and assault.

Minister Hutchins highlighted the use of gendered descriptors such as oversensitive, crazy, seeking attention, and the accusation of being on a witch hunt, all of which, she says, are strategies “to keep women’s voices silent”.

Last month the Victorian Government launched a statewide program ‘Respect Women Call it Out’, a campaign encouraging men to call out the sexist behaviour of other men, which the minister praised as “a game changer”.

“It’s so extremely important as women in our communities, in our workplaces, in our schools, that we stand up for other women when they come forward and we encourage our male counterparts to do the same,” Ms Hutchins urged.

To give attendees insight into the legal framework and support available, Senior Associate of Maurice Blackburn Lawyers’ Social Justice Program Jennifer Kanis drew from her experiences in the field, and had one important piece of advice for workplaces: “Prevention is better than cure”.

Ms Kanis said it was vital to have cultural practices in place and policies from the very beginning, if, and most likely when, there is an incident in their workplace. But even before getting to the point of accessing the law, she said it was important to recognise and overcome social barriers that don’t permit women to get there, and for them to feel comfortable to approach their workmates and bosses for support, to be able to act as soon as possible on the matter.

The fourth and final panellist was Gender Studies academic Professor Hannah Pieterman from Deakin University. She shared her experience of sexual harrassment when starting out as a young economist, and reflected on her reaction at the time to protect the reputation of the perpetrator. Fast forwarding to 2018, she praised the #MeToo movement, and its important role in raising awareness about women’s lived experience, and in providing a crucial platform to share their stories.

It was encouraging to see an audience made up of women of all ages and from all walks of life, including young women from Alphington Grammar who engaged with the presenters by putting forward their own concerns, one of them being the societal aphorism of “boys will be boys”.

Responding to this and adding to the discussion, was Federal Member for Calwell, Maria Vamvakinou MP. A former educator, she said it is important as part of the overall approach to turn part of the attention to young boys, and to listen to their experiences, to find out what makes them tick, and work through it as part of an inclusive education program in moving forward.
“Until we start to understand the behaviour of boys and why they do what they do, and understand the peer group itself that they are shaped by largely, I think we’re missing out on a big part of our broader understanding. And if we don’t have that understanding we’re not going to be able to respond in a way that will bring about long-lasting change,” Ms Vamvakinou said.
Each guest was treated to a pair of stud earrings, as a welcome gift upon arrival, lending itself to the general sentiment of the night, one of inclusion, support and understanding.

To find out more about the Victorian Government’s ‘Respect Women Call it Out’ program, go to vic.gov.au/familyviolence/family-violence-support.html