“My aim is to connect with other people who may come from similar migrant backgrounds and individuals that may be sheltered and confused about sex,” Koraly Dimitriadis says 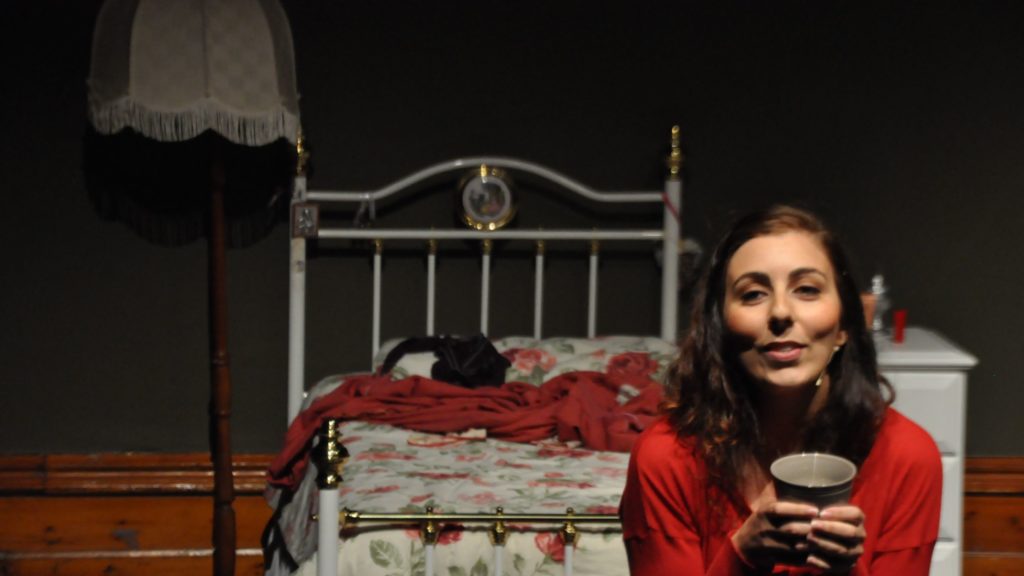 Koraly Dimitriades. Photo: Di Cousens from her theatre show, Koraly: “I say the wrong things all the time”.

It is not Koraly’s first rodeo, but 10 years ago, freshly married and after years of sexual repression and cultural misconceptions, Sexpo was her first encounter with sex as something celebrated and not frowned upon.

Since then, a lot has changed, including Koraly deciding to leave a secure career as an IT specialist to pursue the path of a poet, writer, performer and activist.

Her first poetry collection Love and F*ck Poems became a bestseller in the poetry genre and was even launched in Europe by UK publisher Honest Publishing – there is also a Greek edition of the book, Ποιήματα για Αγάπη και για Γαμήσι.

“I want to communicate with women, this is my aim,” Dimitriadis says. “I want to be honest with who I am and my femininity to give courage to women who have experienced repression.”

Indeed, many women, and men, around the world connected with Koraly’s autobiographical poems touching on culture, religion, divorce, love and trying to discover and claim the sexual self in between.

“I did a tour of my poetry a couple of years ago to other cities and I felt like it was time for me to start thinking about reconnecting with some of those audiences around Australia,” Koraly tells Neos Kosmos.

“Sexpo showed interest in my title Love and F*ck Poems, so last year I sold my book as part of the 2017 Melbourne Sexpo.”

Being part of that event brought memories of her first Sexpo experience 10 years ago. What she saw at Sexpo shook her as she was very confused about sex and what it is supposed to mean.

Koraly went on a journey of self-exploration all the while being vocal on social media through her blog, her published work as an opinion writer, and on stage as an actor and performer.
Her first performance at La Mama with The Good Greek Girl (2013) was a sell-out. It became a film project the next year. She then ran her own fundraising initiative in 2016 with the screening of KORALY: A Mockumentary: I wonder if they’ll make the TV show which led to her poetic play at the end of that year with her KORALY: I say the wrong things all the time.

Meanwhile, she is also a public speaker and writes about her struggles regularly be it as a divorced woman in a tight-knit Greek-Cypriot community; as a single mother; a woman trying to find love again; a feminist.

“Following on [from] all that the Sydney Sexpo were really interested in me doing some talks around cultural and religious sexual repression at the event,” she says.
“I’m going to be there for the entire duration of the Sexpo selling my book and talking to people at the same time.”

This year’s Sydney participation will be a hybrid performance interweaving a talk on her personal journey and poetic verse.

“I will be dropping some spoken word and then going back to the talk,” Koraly explains. “It’s going to be a new thing that I’m trying out but I feel this is the best way to connect with people about this subject.”

At the 2017 Melbourne Sexpo the artist met a lot of people from migrant backgrounds who had been divorced and/or had a similar upbringing to hers and has been looking for a way to approach that audience since.

“I came across people – men and women – who had been sheltered and confused when it comes to sex. My live participation this time is more about giving back to Sexpo for giving me this opportunity, to connect with people that have experiences like me and are experiencing oppression.”

For many people like Koraly, culture and religion repress sexuality, instilling guilt that sex is wrong and dirty outside a marriage; Koraly wants to let them know that it should be celebrated. She also accepts that the majority of the Greek community has evolved a lot over the years but there are other migrant cultures that are breeding the same misconceptions, leaving women confused about sex based on patriarchal values.

“We have this idea that sex is a bad, punishable thing and then when we grow up and we have adult relationships and it’s only natural to have sex. We will face problems and difficulties in relating in our relationships. There might be confusion when it comes to the dynamic but also when it comes to sex itself,” she says.

“I personally didn’t know much about sex when I got married and Sexpo was, for me, my introduction to an alternative view to what my culture had taught me and I would say it was a very eye-opening experience, that opened me up to a non-judgemental and more liberated way of processing the world around me.”

In the lead-up to the upcoming Sexpo event, Koraly will be partaking in Sappho poetry readings in Sydney.

“I will be participating as one of the feature poets at Sappho, trying out a variety of different things not so much to do with sex and more to do with general feminism and migrant culture.”
“Doing these kinds of talks and poetry readings around Australia is a warm-up of getting people interested in my work and hopefully my theatre work, KORALY: I say the wrong things all the time is scheduled to return to the stage this coming year.”