Activist Helen Marcou shared her experience at a Monash University seminar examining ways to create behavioural change in the screen and music industries, as well as in academia 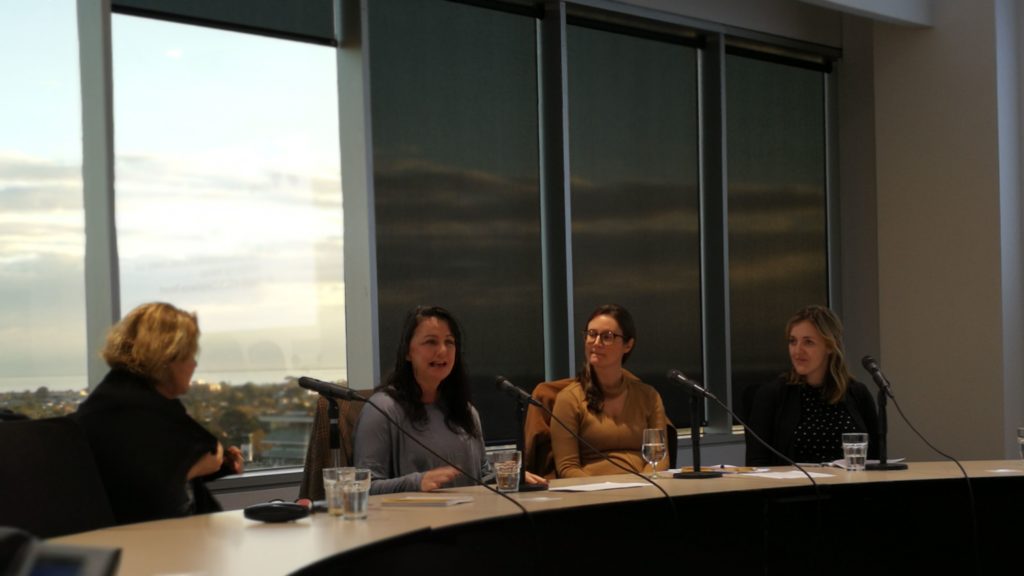 It’s been eight months since the Harvey Weinstein scandal took Hollywood by storm, creating a chain reaction to the film industry as a whole. Australia could not remain unaffected and the tsunami of the #metoo movement certainly reached the entertainment industry; women in music, film, television and stage have been sharing their stories, joining their voices with those in other sectors and requesting for an end to a culture that condones sexual harassment and discrimination.
Last week, Monash University held a seminar to shed light on this issue, titled ‘#MeToo in Australia: Where to now? Media, Policy and Activism’.

Co-chaired by Associate Professor in Film and Screen Studies Olivia Khoo and director of the Bachelor of Media Communication course Associate Professor Therese Davis, the event gave academics and industry experts the chance to hear firsthand accounts of the impact that this movement has had on various aspects of the creative industry and how it affects policymaking. The panel featured three industry experts sharing valuable insight. Claire Marshall, principal advisor at the Victorian Equal Opportunity and Human Rights Commission (VEOHRC); Tessa Mills, senior manager of Policy and Research at Screen Australia; and Helen Marcou, co-founder of Save Live Australian Music (SLAM) and co-owner of Bakehouse Studios.

A CODE OF CONDUCT FOR THE SCREEN INDUSTRY
Given that the #MeToo movement is largely associated with Hollywood and the film industry, its impact on the Australian film industry can not be understated. Representing the federal government funding agency for screen ventures, Tess Mills explained how Screen Australia allows for quality premium Australian drama, documentary and children content to exist in the first place, before going on to describe the organisation’s research that led to the release of 40 years of industry data on male and female participation in the creation of content. “We decided to look at who is telling the stories we are funding and, quite simply, it was men,” she said, explaining that this led to the agency’s ‘Gender Matters’ suite of initiatives in 2015, addressing gender imbalance within the Australian screen industry.

“This marked a shift in our funding policy,” she said, “to be actively looking at the gender make-up of every team, in every single application that comes through our door. That’s meant that every project that comes into a meeting has a gender matters percentage decider,” she added, which determines “who is telling whose story”.

This policy had started before the Weinstein scandal, of course.

“We know that conversations were happening, cultures were being interrogated, we were seeing very small visible change and then #MeToo happened,” she explained. “It really did change everything. It gave our conversation further currency and momentum.”

This led to Screen Australia releasing a code of conduct addressing sexual harassment in the screen industry; a one-page document which is distributed to all staff members working on a production. “It is far from revolutionary,” she said, explaining that it is built on the legal responsibilities stated in the Sexual Discrimination Act, which “has been around for 30 years yet hasn’t stopped sexual harassment and assault from taking place in Australian workplaces.”

Sharing examples of entire productions overseas being axed, recast or reshot in the wake of the #MeToo movement, the Screen Australia policy and research manager explained that “we need to change how we do business.”

Apart from their code of conduct, Screen Australia requires that a staff member be appointed as sexual harassment prevention contact officer, to ensure that such incidents don’t occur and, if they do, to be addressed by the producer (or the police, depending on the incident), otherwise funding will be withheld.

BRINGING ACCOUNTABILITY TO THE LIVE MUSIC INDUSTRY
Government policies are important, particularly if they come as a response to grass-roots activist movements, and this was exactly what Helen Marcou brought to the table, recounting her trajectory in social activism, as the co-founder of the SLAM initiative, formed with the aim “to break the proxy that equated live music with violence”.

A perfect example of a successful campaign, SLAM ended up having its full list of 10 demands being signed off and becoming government policy.

“I had gone from being an activist yapping at the heels of the government to having the ear of government,” Helen said, describing how she used this newfound power to address the issues raised by women in the music industry.

“Into my first day of retirement from activism, I came across a group of young feminists who came together in a private Facebook group to share their stories of harassment, sexual assault and rape within our venues.” This group, called LISTEN, effectively brought Helen back into action, despite her “strong activist fatigue”.

“I felt a deep moral obligation to get involved because, at that time, I had spent five years championing these spaces as safe spaces where you could go for a dignified night out,” she said. Again, this happened well before the #MeToo movement, which Helen described as a “giant volcano”, and said that the shift has been happening for quite some time.

Using her position at a roundtable to discuss live music regulations, with the participation of government representatives, and stakeholders within the music industry, Helen managed to get then Minister for Justice Jane Garrett on board in a quest to create some sort of mechanism that would lead to change.
Although a task force to address sexual harassment in music venues and festivals is a long time coming, this new movement has already made its mark: creating a training module for hospitality workers and security staff in Victoria, which could evolve to the inclusion of sexual harassment training up to and including the responsible service of alcohol, “so that everyone who has a certificate to serve alcohol in the state would also have some training around sexual harassment.”

Stressing the need for greater awareness and behavioural change, Helen talked about a series of grassroots initiatives that erupted on the aftermath of the #MeToo movement, such as the #MeNoMore campaign, which saw 1,000 women sign an open letter to the music industry within 48 hours, or the Your Choice initiative to create awareness and accountability in music festivals and live music venues, with the participation of more than 300 music organisations.
If industry stakeholders were quick to act and set up mechanisms to create change, getting the government and some politicians on board has not been that easy.

In some cases, “it took a bit of politicking and some mean tweets,” Helen said, much to the mirth of the audience. “These are some skills you pick up on the way.”

“The change is possible, because we demand it,” said Claire Marshall, who presented various examples and data from her experience as an policy and research advisor at the VEOHRC.

Her address included descriptions of attempts and training to eliminate discrimination in various fields, most notably within Victoria Police.

The ensuing Q&A focused on both clarifying ways to raise awareness and deal with the issue of discrimination in the workplace, which is endemic within the entire country, and also on the way this affects all ranks of academia.

Systemic change is taking a really long time,” was one of the statements all participants seemed to agree upon. But it has started.