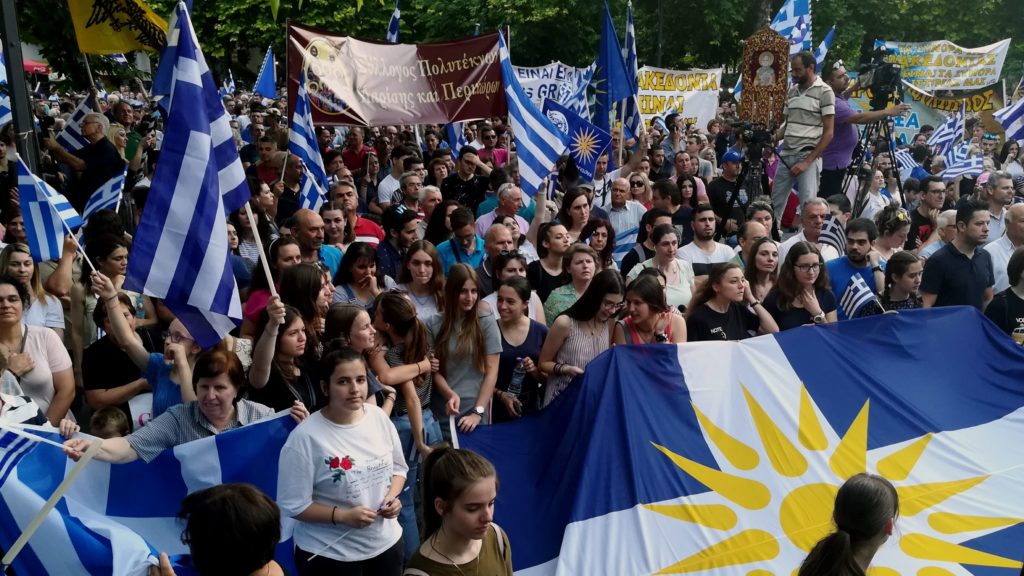 Protesters hold Greek flags and shout slogans during a rally over the name of the Former Yugoslav Republic of Macedonia (FYROM) against to its use of the name ‘Macedonia’ amid a revival of efforts to find a solution between the two countries, in Larisa, Greece, 06 June 2018. Photo: AAP via EPA/PASCHALIS MANTIS

Greek Prime Minister Alexis Tsipras’ announcement that a deal had been reached in a telephone conversation between Greece and FYROM regarding the ongoing name dispute has caused turmoil in both countries and their diaspora populations.

Hellenes in and out of the country have taken to social media platforms to complain and accuse the Greek government of “treason”.

Neos Kosmos contacted stakeholders and leading organisations in the Greek Community who have been actively involved in raising awareness and mobilising Greek Australian diasporans about the dispute.

Panmacedonian Association of Melbourne and AIMS: A loss for Greece; Greek diplomacy defeated

Even though both the PanMacedonian Association of Melbourne and Victoria (PMAMV), and the Australian Institute of Macedonian Studies (AIMS) were supportive of a compound name, they don’t see this decision as a positive development for Greece.

“I can’t say that it offers a viable solution that supports harmony and stability in the region. While certain steps have been taken from Skopje’s side – who is the winner of this deal – nothing has been achieved other than maintaining their status quo.

“The only difference is that [the deal] replaces ‘Former Yugoslav Republic’ with ‘Northern’. The proposed deal does not fundamentally stop irredentism and removing a few mentions from their constitution towards that direction is not enough,” Christos Mouzakitis, president of the PMAMV told Neos Kosmos‘  Eugenia Pavlopoulou.

Stressing that the deal will further jeopardise Greece’s geographical integrity, he said that “the deal only removes one longtime thorny subject from the politicians’ agenda, appeasing NATO allies and the European Union. I find it destructive that the Tsipras government has agreed to that, further solidifying Greece’s wrongful decision to acknowledge the existence of a ‘Macedonian’ language back in 1977; an allegation completely false. The fact that the Tsipras government has recognised the existence of a ‘Macedonian’ ethnicity for Skopje people on top of the language [is wrongful].”

AIMS chair Professor Anastasios Tamis dubbed this first stage of an agreement between Greece and FYROM “a defeat of diplomacy”, adding that “Zaev achieved what he wanted”.

“The Greek negotiation ended up accepting the unfortunate and irredentist [Macedonian Slav] proposal of ‘Severna Makedonija’, not as a single-word compound name but as a simple compound name where the term ‘Macedonia’ defines the essence of their state. Greek diplomacy won certain points in terms of the naming dispute but lost the fight.”

Professor Tamis insisted explaining that “the agreed name, in spite of the legal terms outlining and clarifying the Slavo-Albanian identity of the FYROM people, is just [clarified] on paper. They are never referred to as such unless there is a conflict. With the name ‘Northern Macedonia’ they essentially continue to cultivate the ideology that they are connected to the history of their ‘Southern brothers’, claims on the Aegean, as well as on the history and the civilisation of Macedonia from ancient years to this date”.

As far as the language and ethnic identity of the FYROM nationals goes, Professor Tamis believes that “regardless of the fact that the deal refers to ‘citizenship’ and not to ‘ethnicity’ Greek diplomacy has suffered the ultimate blow, since the Slavo-Bulgarian idiom will get to officially be named ‘Macedonian’ language with the blessings of the Greek state. Accepting the fact that their idiom hails from the Slavic languages of the South is not something new, as they have never claimed their dialect derives from the Ancient Macedonian language.”

According to Professor Tamis, the only positive is that “[Macedonian Slavs] have, for the first time, humbled themselves changing the name of their country, not being able to claim their country is ‘Macedonia’, that is if the two nations don’t overturn the deal. The problem is not solved, it is just moving into a new phase as irredentism continues with the auspices of Greek diplomacy.”

Greek Communities of Melbourne and New South Wales: Would have preferred the term ‘Macedonia’ was not included in FYROM’s new name

The president of the Greek Community of Melbourne and Victoria, Bill Papastergiadis, who supported the Melbourne rally in February demanding the Greek government did not allow the term ‘Macedonia’ to be included in the new FYROM name, avoided taking sides on the deal, telling Neos Kosmos “that the Community would have preferred the term ‘Macedonia’ was not included in new name.”

As far as the language and ethnicity of the FYROM people goes, he refused to comment. He also did not respond when asked whether he considers the agreement a positive or negative outcome for Greece.

“We would prefer an agreement without the reference to Macedonia as part of any name. We will follow closely the events in the respective parliaments of both countries, where this issue will be played out,” Mr Papastergiadis told Ms Pavlopoulou.

Harry Danalis, the president of the Greek Orthodox Community of New South Wales was more accepting of the FYROM – Greece deal, he did stress, however, that it is unacceptable that the citizenship of FYROM nationals would include ‘Macedonian’ on their travel documents.

“I don’t have an issue with the name, although we would all prefer the term Macedonia is not included in their name. At this point this should be the least of our concerns. It’s all the rest that worries me. The fact that they will keep calling themselves ‘Macedonians’ and it will be on their passports.”

“When we refer to ‘Macedonians’ it’s not them; they have nothing to do with ancient Macedonians. Giving that impression is unacceptable (…) the deal has its negatives but taking into consideration the positives, we consider it a positive development. It’s time to set our differences with our neighbouring country aside and focus on the real threats for Greece, it’s not the Skopje people that threaten it. The NSW Greek Community is divided, but at the same time I see a significant number of its members look at it positively,” Mr Danalis said.