Stephen Fry as himself in Mythos: A Trilogy – Gods, Heroes, Men; one of the most unusual theatrical events of the year. Photo: DAVID COOPER / SHAW FESTIVAL

Stephen Fry has done it again. He has condensed 1,000 hours of Greek mythology in three nights, each a full length show spanning over two-and-a-half hours; a deeply captivating experience for those attending the Shaw Festival in Ontario.

Mythos, directed by Tim Caroll, is a world premiere adapted from his new bestselling book Mythos: A Retelling of the Myths of Ancient Greece, and is separated into three individual shows titled Gods, Heroes, and Men respectively.

As both the actor and playwright – only two of his many professions – Fry touches on classic myths with respect and humour, teaching his audiences valuable life lessons while leavened with his droll English humour.

During this triple solo performance, Fry dominates the entire stage simply by sitting in an armchair at the centre of it, with minimal movement. 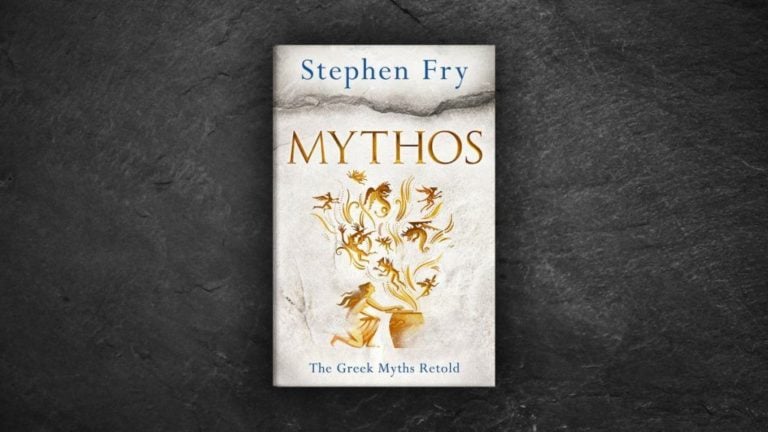 The set is rather simple yet well-conceived and executed by the acclaimed Douglas Paraschuk. Fry sits encircled by parchment-like banners resembling ancient Greek columns, each depicting an Olympian deity.

Once again, he proves that he is a creative powerhouse in his own right, delivering a masterpiece of fluent, warm and erudite storytelling while he mimics every mythical character to appear in the book.

Fry narrates the stories that birthed the universe and humanity almost as if he were reading a bedtime story. He often interrupts the plot with the occasional personal anecdote in his distinct style.

Nick Bottomley is responsible for the backdrop projections, a stream of images and animation, from great myth-inspired art to Hellenic maps and landscapes.

Sometimes there is even audience interaction in a segment he calls ‘Mythical Pursuit’, whereby in a deliberately clumsy way, Fry stands up and asks the spectators to choose a category, offering a bonus lecture in Greek mythology; he makes a point of saying the trivia section is the director’s idea.

Adding to the drama are Kevin Lamotte’s lighting and special effects, complemented by Paul Sportelli’s score. 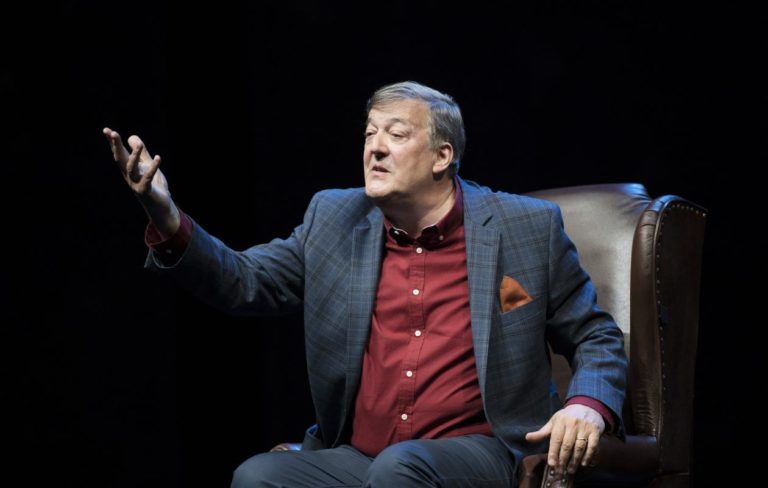 Fry also points out that the stories and the characters become more dynamic and three-dimensional as we move from the Titans to the Gods to the humans.

It makes sense, if one juxtaposes the myths that stress how the immortal gods were removed from emotion, unlike the much weaker humans consumed by their everyday realities.

To get the full experience and even comprehend some of the jokes and metaphors one has to attend all three nights.

In the first part, Gods, Fry takes us from Chaos through the Titans to the origins of the Olympic pantheon.

An ode to the mythical Heroes, the second night recounts the exploits of Hercules, Perseus and Theseus.

The third and most profound show, Men, brings the three installments together. They bind the Homeric tales of the Trojan War and the Odyssey into a metaphor that becomes somewhat of a cautionary tale for modern life. 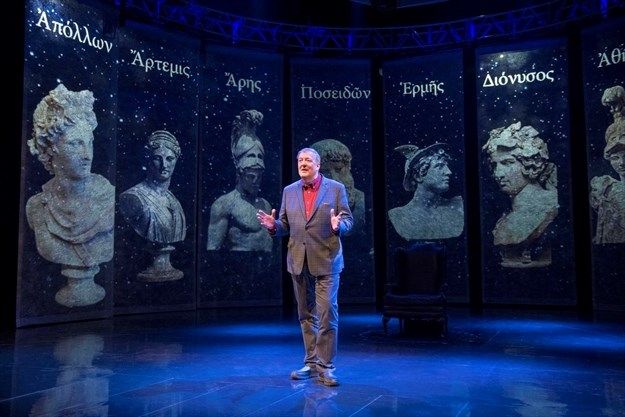 If you are in Canada, the show is on until 15 July at the Shaw Festival Theatre in Niagara-on-the-Lake, Ontario.

Tickets to the Fry Shaw Festival Marathon start at C$45 but can cost up to C$270 each depending on demand and seating.

Find out more about the show at shawfest.com/playbill/mythos-trilogy-gods-heroes-men