Updated: Greece in mourning as wildfires death toll rises to 81

The worst tragedy Greece has experienced in over a decade, the death toll continues to rise with 187 people injured – more than 20 of them children, and many reported missing A woman walks in front of burned cars following a forest fire in Mati, a northeast suburb of Athens, Greece on Tuesday. Photo: AAP via EPA/Yannis Kolesidis

Greece is in mourning following the worst wildfires the country has seen in over a decade, with the death toll standing at 81, with over 180 people injured, and many reported missing, the exact number not yet revealed by the government.

The fires, which started on Monday in the mountains overlooking Kineta, located 54 kilometres west of Athens, saw a state of emergency declared with locals advised by authorities to flee to safety.

The government has declared three days of mourning, but the Greek PM reminded people to try and stay strong during this difficult time.

“We mustn’t let mourning overwhelm us, because these hours are hours of battle, unity, courage and above all solidarity,” he said.

According to authorities, 26 of the casualties were found dead in the yard of a villa in Mati, 40 kilometres northeast of Athens, a mix of adults and children huddled together – “perhaps families, friends or strangers, entwined in a last attempt to protect themselves as they tried to reach the sea,” said rescuer Vassilis Andriopoulos.

Meanwhile other bodies were recovered from the sea.

Hundreds of homes and cars have been destroyed, with 308 engineers due to arrive at the sites affected by the fires to assess the damage according to government officials.

“The problem is what is still hidden under the ashes,” said Vice President of Emergency Services Miltiadis Mylonas.

According to the mayor of nearby Rafina, Evangelos Bournous the village of “Mati no longer exists”, with winds of over 100 kilometres per hour resulting in the fire progressing rapidly through the village, while whipping fireballs into the sea, where hundreds of people were headed to escape the blazes.

“People are shocked, lost. Some of them have lost everything: children, parents, homes,” said Red Cross spokeswoman Georgia Trisbioti.

While it is yet uncertain how the fires started, officials have said it is a possibility they were deliberately ignited, with supreme court prosecutors announcing an investigation into the causes. Smoke rising over an avenue during a forest fire in Neo Voutsa, a northeast suburb of Athens, Greece on Monday. Photo: AAP via EPA/Alexandros Vlachos 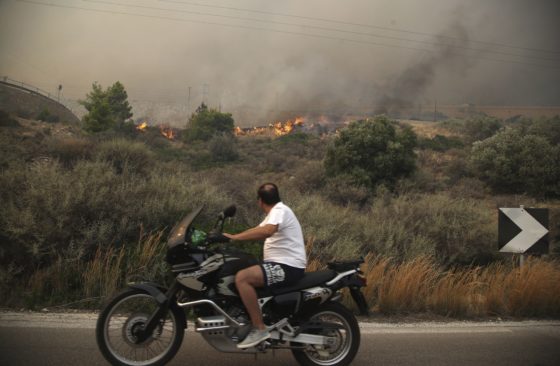 A motorcyclist looks at smoldering shrubbery on a road near Kineta, west of Athens on Monday. Photo: AAP via AP Photo/Thanassis Stavrakis 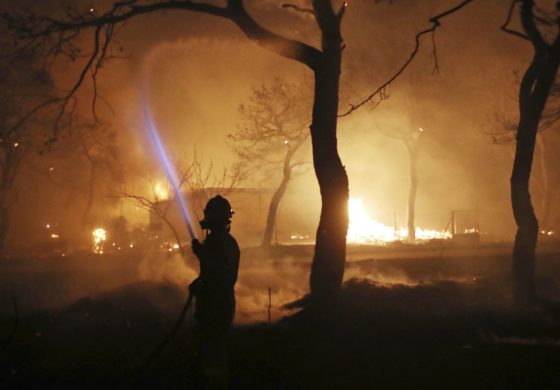 A firefighter sprays water on the fire in the town of Mati, east of Athens on Monday. Photo: AAP via AP Photo/Thanassis Stavrakis