Mati – Rafina: the day after 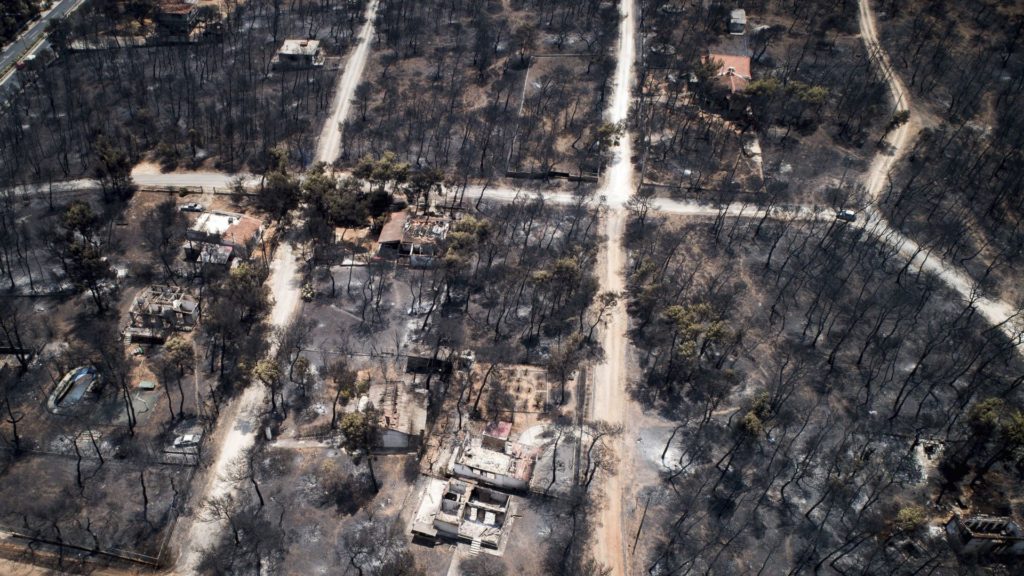 I was there on Tuesday morning. At Mati and at Kokkino Limanaki (‘red harbour’) in Rafina. Or what is left of them. A seaside resort with minimal access to the sea.

One of the most popular beaches in Attica, tailor-made mostly for aerial photography. Narrow roads, hundreds of cars, thousands of residents and visitors who wanted to enjoy the scenery on a hot summer day. And zero evacuation drills for its citizens.

As I was walking through the narrow roads in Mati and watching the hundreds of burned cars left there, on the side of the street in every block, I saw people in disarray. Lots of tears, lots of pauses. I spoke with residents who lost their homes in the blink of an eye.

“Everything happened in an instant. I managed to get away in the last second, my instinct told me not to drive to the sea, as there would be congestion there. I [have] lived here since 1978. I have nothing now. But I’m alive,” Kostas (surname has been withheld), 55, told me as he was standing there pondering next to his house that was burned to the ground.

PEOPLE WERE LEFT TO FEND FOR THEMSELVES
Mati, Rafina, and Neos Voutzas, the scenes of the tragedy, are built (more on that later) next to a pine forest, a large part of which was chopped down to accommodate a barrage of buildings. If there is one type of tree that should be as far away as possible from any urban area it’s the pine tree.

This wasn’t the first time eastern Attica has been devastated by wildfires. It is a region that is vulnerable to fire, plain and simple. A plan should have been in place for a quick evacuation where a central agency would have the police, the fire department and the rescue teams in place, ready to take the people to a predetermined safe place.

There was no such thing. There was the police telling people right before Marathonos Avenue: “go to the sea to save yourselves, the fire is coming,” as drivers were frantically trying to escape and they were ordered back to Kokkino Limanaki and Mati.

Speaking to the mayor of Rafina-Pikermi, Evangelos Bournous, he confirmed that “the evacuation order was never given. Mistakes were obviously made, but right now our first priority is to track down those missing.

“People were left to fend for themselves. And everything, wind, scorching heat, prevention measures, coordination was against them.”
The flames went literally engulfing the sea at this time.

TIME TO SEE WHO IS RESPONSIBLE
The general consensus in the wake of a huge tragedy is that ‘now is the time of mourning, not the time to see who’s responsible.’ I disagree. It is exactly the time to see who’s responsible that a seaside resort bristling with life turned into a cemetery in only a couple of hours. Ministers, fire department captains and mayors spoke of “unprecedented natural conditions.”

The prime minister labelled the disaster “an asymmetric event.” Everyone says that there is a plan in place in case of devastating wildfires, floods, earthquakes.
Well, it didn’t work. Last summer in Portugal after two deadly wildfires that killed 106 people, interior minister Maria Constança Dias Urbano de Sousa handed in her letter of resignation, saying: “I don’t have the political and personal conditions necessary to carry out my functions.”

So far, in the land of thick skin, nobody has shown even the slightest desire to admit defeat, to say: ‘I accept part responsibility, this happened on my watch. I cannot continue to hold this position as a mark of respect for the victims and their families. And I’m sorry.’

TIME TO SHOW THE LESSON HAS BEEN LEARNED
Everyone is blaming the plethora of laws, many of which contradict each other, and many times it seems like they were implemented in order to make some people safe from criminal prosecution in times like these.

In every seaside area in Athens, from Oropos to Nea Makri, development, especially in the big building wave of the 2000s, prioritised private beaches in a public coastline. Plot owners and hotels were allowed to build cement walls that only leave a small part of the sea open to the public.

And as legislation after legislation passed, people who built houses and hotels in the middle of the mountain or right in front of the sea were suddenly legal. This has to change immediately. With laws that prevent owners from blocking court decisions (and bulldozers) for six or seven years.

The resorts can’t be rebuilt from scratch. But infrastructure must focus on escape routes, thorough clearing of the roads that lead to the forests, where branches, grass and landfill become tinder in the event of a fire. And local authorities must perform regular evacuation drills that have been proven effective in other countries time and time again. It’s time to show that lessons have been learned. Or this will happen again, sooner or later.

FAITH IN HUMANITY
The overriding wave of support for those affected by this terrible tragedy restores faith in humanity: tons of water, food, medicine, clothing, people rushing to the hospitals to give blood for the wounded. People opening their homes to those who lost theirs. Volunteers who visit the scene of the tragedy to help those hit the hardest, to rescue animals, to offer assistance any way they can. Vets, plastic surgeons, truck drivers and so many more offering their services for free for those affected. Especially for a country like Greece which has an almost zero volunteering culture, it is the only shining light.

On Thursday night, the three-day period of national mourning for the dead, those still missing, the injured, the people who lost their belongings came to a close.
In the fires of 2007 we lost 77 people within 10 days. In 2018 we lost many more than that within one day. It’s time for those responsible to act responsibly and quickly and diligently push bureaucracy aside and do what they’re supposed to.

As I was outside the municipality of Rafina on Tuesday morning where a temporary camp by the Hellenic Red Cross was set up to offer first aid, a man in his 40s walked past me. He had burns everywhere. His t-shirt was torn up. He could barely walk. He saw me holding a microphone, he came up to me and he told me:

* Vangelis Tsonos is an editor and reporter for ‘Attica TV’, the channel for Attica local government, and a ‘Neos Kosmos’ correspondent.