Greek Australian amongst team of experts sent to Greece

A 10 member team of disaster assistance experts, amongst them Greek Australian Station Commander Chris Stathis, travel to Greece to help in the recovery effort of the bush fire affected region 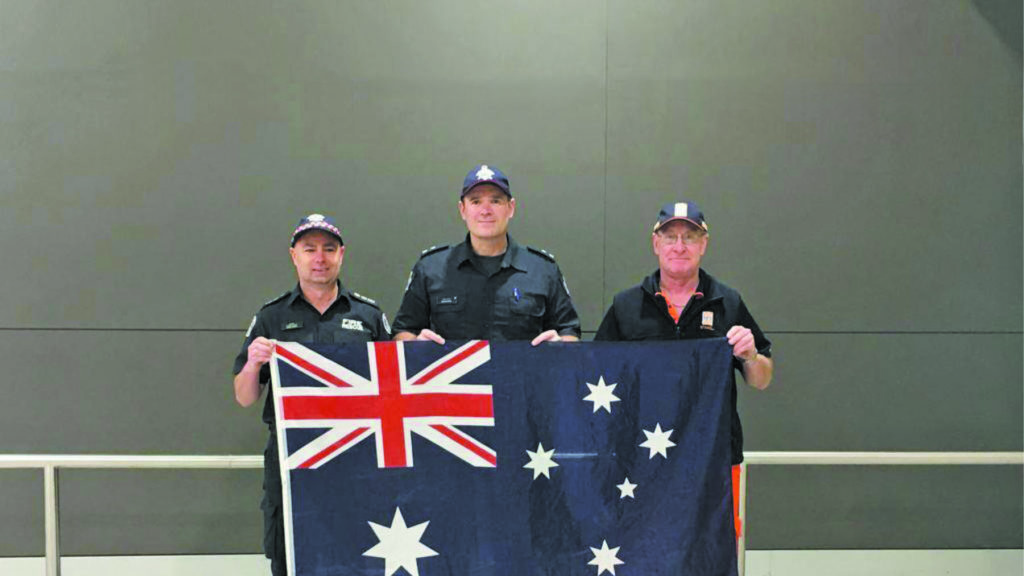 Victoria is sending 3 Urban Search and Rescue (USAR) personnel to travel with personnel from NSW to Greece. Photo taken at Melbourne Airport before their departure. Photo: Supplied

A friend in need is a friend indeed, and Australia has proven once again its strong and withstanding friendship with Greece.

In a joint statement, the Australian Prime Minister Malcolm Turnbull MP and Minister for Foreign Affairs Julie Bishop MP announced on Thursday that Australia will send 10 Disaster Assistance Response Team members from Fire and Rescue NSW and Victoria Fire and Emergency Services to Greece to assist in the recovery efforts of the bush fire affected areas.

“We are well placed to support Greece in recovery efforts, drawing on our experience of devastating bushfires at home,” reads the statement, in which Mr Turnbull and Ms Bishop acknowledged the “longstanding and close friendship” between the two countries, and also expressed their solidarity to the people of Greece.

“Our thoughts and those of the Australian people are with the people of Greece who have been affected by this catastrophic event,” they said. “We stand together with Greece during its time of need.”

The Assistance Response Team will be supported by Crisis Response Officers from the Department of Foreign Affairs and Trade and Emergency Management Australia, who will assist Greece to plan and coordinate recovery efforts.

Amongst the expert fire-fighters and rescue personnel chosen to travel to Greece is Greek Australian Station Commander, Pyrmont Fire Station, Chris Stathis. Hours before departing from Sydney, he spoke to Neos Kosmos about their mission and his role in it.

“With operations like this, we sent people who have expertise in dealing with this type of situations, we have guys who are in the primary rescue section so their qualifications usually deal with disasters such as bushfires, earthquakes and building collapses.
“We also have the technical equipment to be able to search for people if buildings collapse and also provide any expertise mainly with strategics and logistics,” says Station Commander Stathis.

During his 26 years in service Commander Stathis has participated in two more comparable overseas operations – in earthquake and tsunami affected areas in Japan in 2013, and during the relief efforts after the catastrophic earthquakes caused havoc in New Zealand in 2011.

His knowledge of Greek language and his previous experience in disaster zones, secured Commander Stathis’ participation in this mission.

“My role will be primarily as an interpreter for our fire-fighters. I am also hoping to help boost the morale for the fire-fighters over there, in some aspect. I think they will be pleased to see a person from Australia with Greek background amongst them,” adds Mr Stathis.

Although his family originates from Achaia, he has family living close to the affected areas and he concedes that this is not a ‘business as usual’ mission for him.

“To be honest I feel a bit anxious. I know how bad the fires were. I definitely have family in the disaster zone surrounding areas and I was in contact with them. I was able to talk to one of my uncles and he said everyone is fine but he also said the damage caused is devastating,” he notes, adding that while emotions run high, allowing them to overpower him is not an option.

“I think when I go there, and that applies for the rest of the team too, I got to be in a frame of mind, that I am there to lend my expertise on what I do and help out the people there, and the country. The fact that I have relatives there, makes me nervous but helping them comes first”, he says.

The Disaster Assistance Response Team was expected to land in Athens last night. Deployment at this stage is 14 days.