Eva Palmer, the American who reinvented herself as an ancient Greek goddess 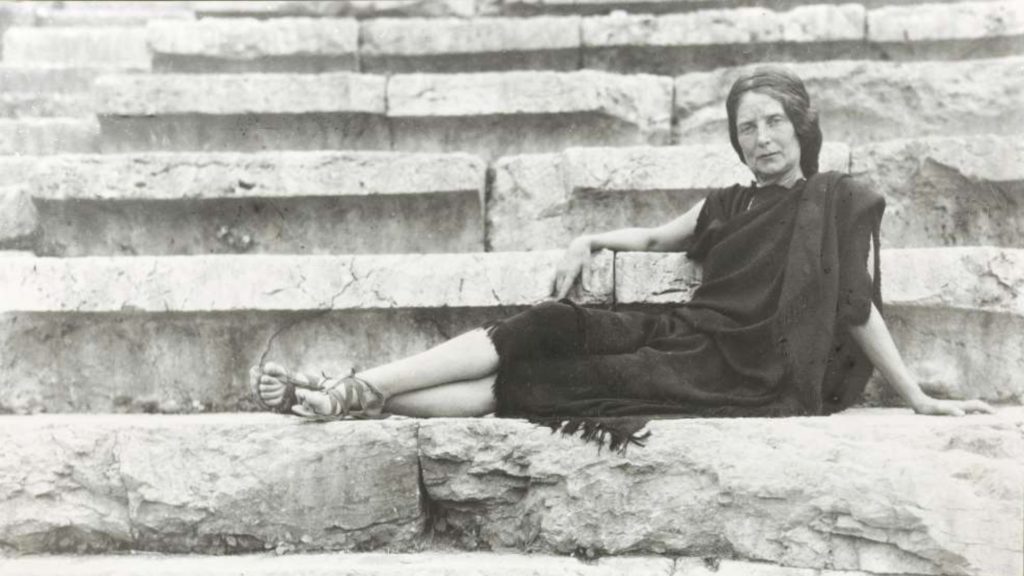 Eva Palmer (1874–1952) was arguably one of the most inspiring and fascinating women of the 20th century, described as both brilliant and gorgeous with floor-length auburn hair.

The American free-thinker, director, performer and creative was widely known as a fashion icon of her time inspired by the ancient Greeks. She was also the beloved wife of seminal Greek poet Angelos Sikelianos with whom she envisioned the Delphic Festivals revival. She had recounted this story herself in her memoirs, but her own story has never been told in detail. Now professor Artemis Leontis has written the first biography of a woman mostly known through the publication of her love letters to her husband. The book, titled ‘A life in ruins’, is expected to come out in February 2019 through Princeton University Press.
Palmer, was born in Gramercy Park in Manhattan, New York to parents Courtlant Palmer and Catherine Bennett, both liberals who offered their daughter unconventional education and allowed her to explore the arts freely, be it music, theater or literature.

A restless spirit, Palmer found the conventional way of life in New York uninteresting and moved to Paris. There, she settled in Neuilly-sur-Seine, a known expatriate neighbourhood, where she enjoyed all pleasures of a frivolous life and fell in love with the legendary French actress Sarah Bernhardt.

It was in Paris that she met Raymond Duncan, brother of pioneering dancer Isadora Duncan, and his Greek wife Penelope, sister of Greek poet Angelos Sikelianos, and became infatuated with his poetry.

Seeing Eva’s fascination with all things Hellenic, Penelope taught her how to weave in the Greek traditional art of the loom to the point where she created and wore her own garments and sandals, creating her signature look. As Artemis Leontis reveals in her book, “Palmer’s most spectacular performance was her daily revival of ancient Greek life”.

“For almost half a century, dressed in handmade Greek tunics and sandals, she sought to make modern life freer and more beautiful through a creative engagement with the ancients.”

The creative trio, following how popular Palmer’s unique fashion statements had become among members of the upper class, decided to move to Greece in 1907.

It was in the ruins of the Duncan’s old home that Palmer first laid eyes on the much younger Sikelianos. It only took one look to spark the fiery romance that solidified over many conversations on art, politics, history and culture.

Palmer followed Sikelianos to Lefkada, where he lived; they got married in 1907 in Bar Harbor, Maine. She hyphenated her name and together they decided to bring the Delphic Festivals back to life.

The rest is history…