Chloe Amalfi, a 12-year-old Australian student of Greek and Italian heritage has just become Melbourne’s Junior Lord Mayor, a title that she will carry for the next 12 months.

She is the winner of the 2018 Melbourne Day Committee competition that was finalised on Monday after the judges deliberated and unanimously decided Miss Amalfi was the strongest candidate out of the seven finalists.

“I’m feeling very excited and kind of overwhelmed but really looking forward to the 12 months ahead to my duties,” Chloe tells Neos Kosmos.

“I will actually be seeing Lord Mayor Sally Capp next Thursday 30 August – which is Melbourne Day – and I’ll be raising the flag with her at Enterprise Park, and the best part is my class gets to come as well!”

Even though the committee unanimously announced her as the winner, Chloe never thought she would win.

“To be honest, I personally never thought I’d win this as the other nominees were so strong,” she admits, adding that perhaps an unexpected question and the topics she focused on was what set her apart and got her across the line.

“They were asking questions that they didn’t necessarily put down in your interview sheet or the application and people said I did a really good job of that. Most candidates talked on the same topic, gave similar answers, reciting pollution, recycling, exercise. I talked more about homelessness, infrastructure projects, security and cleanliness.”

Chloe’s mother, Alex Amalfi told Neos Kosmos that her daughter did not advise them before putting herself forward in the competition after it was introduced to her class by the teacher.

“I didn’t even know about it,” Alex says. “I only found out after she was selected. She did her own research, looked up all those issues. She took her own initiatives there with her teacher, came home and told us she put herself forward. She was pretty relaxed with everything.” The Lord Mayor (L) with the junior winner and her mum Alex Amalfi. 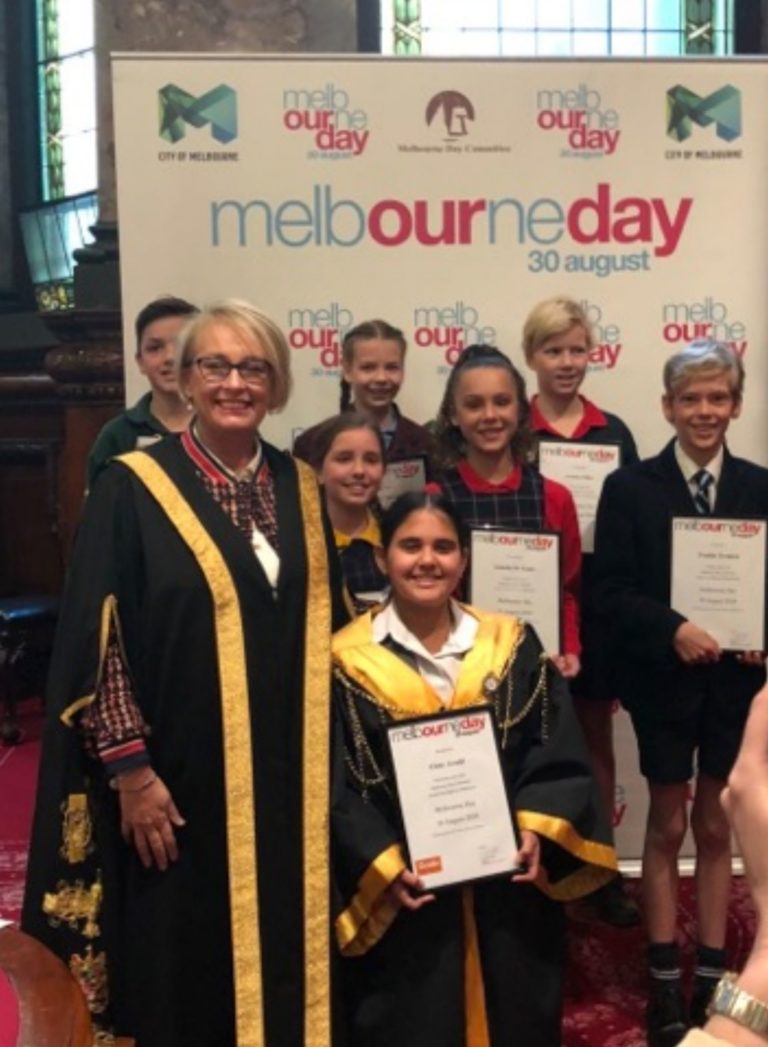 Indeed, even though the teachers at Genazzano FCJ College in Kew where Chloe studies presented the competition to the entire class, she was the only one in her midst that took on the challenge.

“I found the questions important and I was thinking about the future and all the things that could be done to make this beautiful city better,” she mused changing her tone to stress Melbourne’s increasing homeless population.

“It’s really sad and we definitely need to fix it quick because two out of five homeless people are under the age of 25. I gave some answers on how I think we could help them, (…) provide more homeless shelters, assist them to get support from offering basic supplies to long-term solutions,” she says.

“Making homeless people feel more secure, safe and included into the Melburnian community is imperative, something we need to work on with the council and engage the entire city.
“My main idea was to utilise vacant buildings as temporary shelters.”

Staying true to the Melbourne Day Committee core values, Chloe understands that all Melburnians need to help correct the record about the founding of Melbourne and celebrate its anniversaries.

“Melbourne Day is all about celebrating Melbourne and bringing people and communities together to promote what our city has to offer,” she says.

“That’s what I feel this junior role is here to represent and support.

“All the candidates touched on how important multiculturalism is – perhaps even more than I did – and personally, I do feel that without all the cultures, Melbourne just wouldn’t be Melbourne.”

The young Australian, not only appreciates her mixed heritage, but she tries to be as connected to it as possible.

“I am half Greek, half Italian and I am very connected to both my backgrounds. Recently we went to Greece. My grandparents from my mother’s side are from Lefkada and I’ve visited twice. I’m proud of both my identities, but I find it hard to speak Greek or Italian most of the time.”

While being Junior Lord Mayor for the year is something Chloe is looking forward to, being able to simply enjoy the rest of her childhood comes first.

“I just want to go to school, spend time with my family, with my friends… You know, being a child and being normal!”

Even though outside of school Chloe’s schedule is quite hectic as she engages in quite a few extracurricular activities, she promises to stay on top of her duties as Melbourne city’s junior boss.

“I do dance twice a week; hip hop, jazz and contemporary, and on Saturdays I play netball and do sports swimming during the week, but I know I can manage being Junior Lord Mayor too!”

“She’s always been a very confident and passionate child and hopefully in the future she’ll get to make more of a difference towards what she believes in,” Chloe’s mum, Alex says.

“Peter Hitchener said to me on Monday that she just shines. She’s such a natural performer; I couldn’t be more proud.”