Traders lobby for $400,000 masterplan to meet decades of neglect 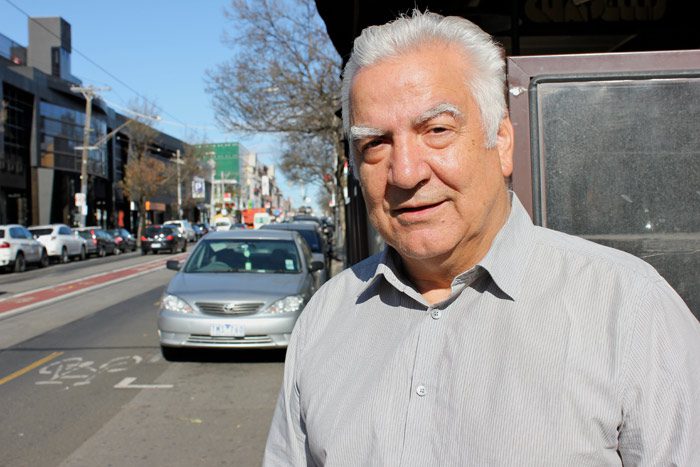 Melbourne’s Chapel Street traders are up in arms over the decline of their iconic precinct which they, and more importantly their customers are saying, falls woefully short of what a major Australian retail area requires.
Without adequate maintenance and enhancements for the past twenty years, the Chapel Street precinct has been allowed to become a shabby third-rate shopping area, according to local traders and residents.
And they’re not prepared to let the slide continue, says Jim Pothitos, president of the Chapel Street Precinct Association, who is leading a campaign to persuade the City of Stonnington to undertake an overdue upgrade of the precinct.
“People come here and don’t like what they see,” Pothitos told Neos Kosmos. “The council’s own survey shows that more than half the local residents think Chapel Street is either unattractive or very unattractive.
“Other areas have had their beautifications – Glenferrie Road, Malvern for instance where they’re up to stage 7 and spent $6 million on upgrading the area, High Street Armadale, Toorak Road South Yarra – they’ve all had upgrades. We’re not asking for anything more than anyone else.
“The Chapel Street precinct pays almost four per cent of the total $72 million collected each year by the City of Stonnington,” says Pothitos.
“That compares with just over four per cent for Chadstone shopping centre, so really they need to put some money back into the goose that lays the golden egg. It’s time we had our fair share.”
At the heart of the appeal to the City of Stonnington is for the council to commit $400,000 in the next financial year to the development of a masterplan that would pave the way for a $10 million upgrade to Chapel Street over four years.
A recent audit by the Chapel Street Precinct Association (which represents 1500 businesses in the area) found a litany of safety hazards throughout the precinct, and the council’s own survey has provided evidence that the area no longer represents 21st century expectations of an international tourist shopping and entertainment destination.
Pothitos, one of the pioneers of the food and beverage industry in Chapel Street can remember when the area was a sea of factoryettes manufacturing textiles.
Rejuvenated largely by migrant communities in the 1950s, Jim set up his restaurant in the street more than 30 years ago and has been alarmed to see commercial opportunities declining in recent years.
“When international brands like Adidas have to leave the street, something’s up. Foot traffic has dropped off because people come and they get a bad impression. They say the whole place is looking shabby.
“We’ve been held off for the past four years after making a number of submissions to the council, and it’s always ‘next year or the year after’ but we do not have the luxury of time anymore. We need this done as a matter of urgency.”
Fellow trader John Schulte, manager of the Gant menswear store at 577 Chapel Street echoes Pothitos’ sentiments.
“Stonnington City Council views Chapel Street as the jewel in the crown, but it’s lost its tarnish. If they want this to be one of their go-to destinations they need to spend a little bit of money,” said Mr Schulte.
“I had some people from New York who said they’d heard about the precinct but were terribly disappointed with what they saw.”
City of Stonnington CEO, Mr Warren Roberts told Neos Kosmos that the precinct’s economic role in the context of Stonnington was “substantial”, describing the precinct as `’the third biggest retail hub in Victoria.`’
Mr Roberts confirmed that the Council’s Draft Economic Development Strategy 2012-2016 was “currently open for consultation” and that the City of Stonnington’s Chapel Street Improvement Plan was in the process of being drawn up, with works to be delivered in the new financial year.
The CEO added that a second structure plan for the area, setting out the council’s long-term vision for the development of Chapel Street is being revised over the coming months.