When we look at Nelly’s photographs at the Hellenic Museum, we are really looking into a mirror 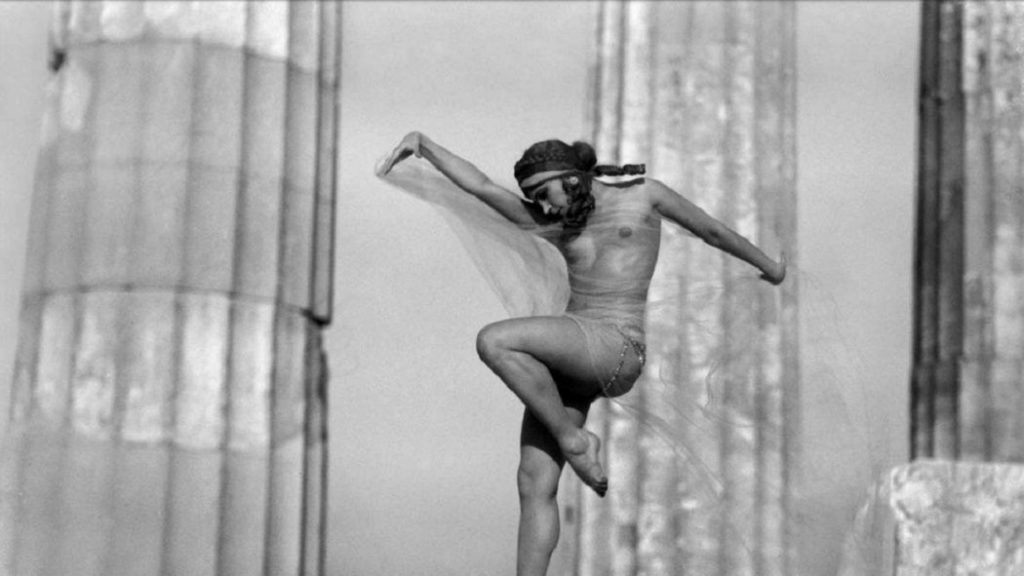 Do we lean against the ruins? Or are we ideologically against ruins in general and crave their demolition?

The polysemy of the Hellenic Museum’s latest exhibition: “Against the Ruins: Photographs by Nelly’s,” is inordinately tantalising. Elli Sougioultzoglou-Seraidari, born in Aydin in Asia Minor, and known as “Nelly’s” is best known as a Leni Reifenstahl-like photographer, whose interbellum period photographs of ancient Greek ruins set against the elemental backdrops of sea and sky did much to mould the iconic perception of Greece in the Western consciousness, or inversely, by way of internalisation, the West’s iconic perception of Greece, as a stereotype in the Greek consciousness.

The photographs that adorn the exhibition are a case in point. In a small room on the Museum’s ground floor, images closely framed next to each other form a veritable comic strip of a narrative. Posed among ruins, and only ruins, statuesque models pose variously clad in armour or helmets, their long chitons folding precisely in symmetrical pleats. Some of them raise their arms and legs in dance moves and they appear to be suspended in the air, waiting desperately for someone to animate them. An archer draws a bowstring and his muscles tense and are as taunt as the drawstring he is drawing to his chest. It is an image pregnant with anticipation. Will the arrow reach its target? Will it actually ever leave the bow at all? What is the arrow aimed at? In this tableau that has been masterfully curated in such a way that it resembles a frieze on a classic temple, we struggle to comprehend whether life has been paused, or whether, it actually has ever begun. 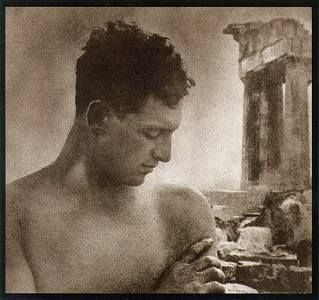 Like a supplicant at a Greek temple of old, or an initiate into the hallowed mysteries of a classical goddess, the visitor ascends to a higher level, in order to have the next set of images revealed. On the first floor, one enters a darkened room, a sanctuary of the votive cult image, and immediately, squares of light puncture the dense blackness. These are Nelly’s images illumined. Here, among the ruins of other temples, naked and semi-naked models, such as Mona Paeva, Prima Ballerina of the Opera Comique, dance, cavort and frolic. Mona Paeva’s nudity caused scandal when the photographs of her on exhibit were published in the ‘Illustration’ magazine in 1929. As if to prove the perennial ability of Nelly’s images to provoke and arouse emotion, they also caused scandal last year, when the social media platform Facebook banned the historic images posted by the Hellenic Museum in anticipation of its exhibition. To be enshrined as a Nelly’s icon, clad or not, is to be immortal. To be permitted to behold the mysteries of their entire parts exposed, is to receive enlightenment.

Looking at the blinding images of statuesque glory that gleam defiantly into the darkness, it is hard to understand why the Facebook fuss. Hung at just about eye level, so that one approaches them with the reverence and awe due to cultic images that codify and symbolise the ancient past it is taken for granted that the initiate worships, they appear remote, distant and unattainable. Are these gods and goddesses that have turned their back on and no longer have confidence in their unworthy creations? Or are they merely collections of dead deities, old and powerless, memories of past and long gone triumphs, preserved in formaldehyde and now suspended before us, as perfect but lifeless personifications of the rubble in which they are situated, like dusty exhibits in obscure and seldom-visited museums? For all their pretensions at movement, the leaping, gambolling and twirling figures are going absolutely nowhere, and, as we gape at them devoutly, neither are we.

Even so, the images are truly majestic. The juxtaposition of light and dark in the room complements exactly the chiaroscuro employed by Nelly’s in her images: leaving one part of the form in the dark, while the background remains empty, in homage to the techniques employed by the Great Masters of the Renaissance. These are photographs that transcend photography itself. Instead, they assume the quality of frescoes, or of icons, symbolising the search for the spiritual element, a poetic atmosphere and the demonstration of the form’s most profound essence. There is truth then to be found not only among the dead, but even among those yet to be born in their image. That it is a composite truth can be evidenced in the syncretic manner in which Nelly’s expertly employs collage in order to build up her images, in a layered process reminiscent of the art of Byzantine iconography. That the obverse can occur, in which we strip down the interplay between light and dark and the juxtaposition of conflicting images into their constituent parts, as a natural scientist chips away rock to reveal a fossil, is to de-sanctify and simultaneously reconsecrate the mysteries of our own self-perception. 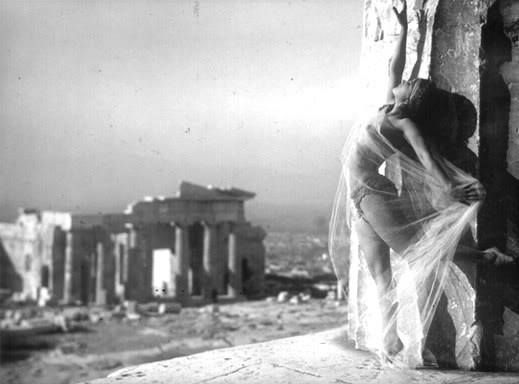 Nelly’s images can and have been exhibited everywhere, but their presence in Melbourne, as a result of the collaboration between the Hellenic Museum and the Benaki Museum, supported by the Victorian government, is extremely significant. Like most of us, Nelly’s was born and experienced her formative years outside of Greece. As exhibition curator Aliki Tsirgialou explains, Nelly’s perception of Greece, as is attested in the photographs comprising ‘Against the Ruins’, thus bear no resemblance to the country in which she arrived, in the aftermath of the Smyrna Catastrophe and appears to have been constructed during her sojourn in Asia Minor and her studies in Germany.

This is not to say that the images are not the less Hellenic, due to their being non-Helladic. They are stylised and idealised interpretations of a particular perspective of an artistic and cultural legacy, the remains of which transcend the borders of Greece and can be witnessed even today in Asia Minor and beyond, ultimately created, as a response to loss of homeland.

It is this aspect of Nelly’s work which is so poignant for Hellenic Melbourne. We too, those born far from Greece and those who have travelled and settled here as a result of catastrophe or triumph, also idealise the concept of Greece in an eerily similar manner. We too tend to construct our own images of Greece, not only to cope with loss or the yearning to overthrow the tyranny of distance but also, in order to define ourselves and find a common vocabulary with which to portray ourselves to the mainstream. We too, in creating a topography of loss, tend to see Greece not as a vital, evolving organism, but rather as a ravaged, static ruin, frozen at the point at which our expectations have not been met. In our festivals, our comedy and our discourse, we employ a diverse range of codes, many of which derive from Nelly’s own iconic palette of symbols, unwittingly welding ourselves onto her narrative as a means of defining but also containing the ontopathology of the diasporic hypostasis. When we look at Nelly’s photographs at the Hellenic Museum, both of us are really looking into a mirror.

Our ruins, real or contrived, metaphorical, or physical, define us. We lean against them for support, even as we push back against them, seeking their stability, in order to overturn them and clear them away, desperate to construct something new upon their foundations, yet we can really never let them go away, even though we know they are not complete and offer no shelter. It is the engagement with this paradoxical process that makes Nelly’s work so pertinent to us and the Hellenic Museum’s resolve to graft us to her narrative, compelling us to critically appraise our own cultic images that makes ‘Against the Ruins’ such an important and inspired exhibition.

‘Against the Ruins: Photographs by Nelly’s’ will be hosted at the Hellenic Museum between 30 August 2018- 3 February 2019.