From Crete to Australia: Xylouris White remind us that home is where music is born

Xylouris White is one of those bands that no matter how much you hear about their music you can never get the whole picture until you listen to it.

At least this is what happened to me. In preparation for this interview, I went through an array of reviews describing it as a cross of Cretan folk with pretty much whatever you can think of with a post prefix, post-rock, post-punk or free jazz, and of course my favourite buzzword ‘world’ music.

Lacking expertise in the field, my take on their latest album was situated in the sphere of emotions, receiving it as a soulful celebration of whatever makes us feel alive.

But then again, as George Xylouris points out early on in our conversation τα πολλά λόγια είναι φτώχεια.

“Nothing from the above and all of it at the same time is what describes our music,” he tells Neos Kosmos.

“The reason we defy any labels is that we’re not trying to be one of these, meaning we’re not trying to make Cretan music rock or jazz or free jazz. What we put in is ourselves, we do what we’ve always done even before Xylouris White, so that what comes out is real, authentic and truthful,” he says.

According to Jim White, this urge for experimentation and playfulness is what distances them from the concept of a “recycle band”.

“I think it’s a combination, a sort of conversation between playfulness and intention, it’s not all coming from you, in fact it’s like a relationship.
“We’re not an artificial construction, we’re friends that have a musical connection and we started this journey, or whatever you want to call it […] It’s more like being who we are and then as we find out and learn new things it changes, it’s fluid and inventive in a playful way.”

After all, it would be impossible to put prescriptions for a collaboration like theirs: a Cretan lute player with a mesmerising voice loved by Greeks at home and abroad joining forces with an Australian-born internationally acclaimed drum virtuoso.

Music is in a way the mother of us all. Music is life, so we think the very fact that we live, we owe it to music as it makes us feel alive and gives meaning to whatever we experience. – George Xylouris

Since releasing their first album in 2014, they have won the hearts of audiences in Greece, Australia and around the globe.

Now, a few months after the launch of their third album Mother and following a somehow unplanned extensive tour in Crete, they are heading back Down Under for a series of performances.

A show in the Rethymno municipality of Anogeia, during the anti-racist festival Haimalina last month turned out to be a catalysing force for the Cretan tour.

“There were around 3,000 people, anarchists, shepherds, villagers and others, a fantastic mix of all sorts of people,” says White, and Xylouris fills in the details:

“Audience response was so warm, not just because it happened during an anti-racist festival bringing people from all over Greece and abroad […] but also because it took place at Anogeia, a location considered a fortress of freedom for centuries now.
“And then the music made the emotions even stronger; just to give you an idea, I was crying and laughing at the same time that night, as many people did as well. I was crying out of joy and feeling moved. So this resulted for our shows to extend into a tour playing in Iraklio, Agios Nikolaos and Gerani in Rethymno.”

Xylouris admits that performing in his place of birth always bears a special significance.

“Every time I find myself n Crete, I feel that we deposit all these music goods we’ve accumulated while touring abroad and I think this is also perceived by the people […] And it’s also the other way around; whenever I depart from Crete I get the sense I’m carrying with me a bag full of musical and emotional ‘products’,” he says laughing, but denies the nickname of a ‘music merchant’.

“I feel more like a messenger, this kind of encapsulates the way I feel doing this job. For instance, every time I play syrto, I can feel it’s a dance that has been performed by thousands before us,” he explains and takes on board Shelagh’s, his partner’s, comment about the resemblance of this role with Ermis.

“Yes, you’re right, it’s like Ermis, as he has wings attached and this is what we do essentially, we fly high with the wings provided to us through music.”

So, how does he feel about Australia, where he spent a great deal of his adult years?

“It’s like another homeland to me,” he replies and describes it as the locum of his “re-acquaintance with Greek music”.

“I was surrounded by music and musicians,” he explains giving special credit to the late lute player Christos Baltzidis.
“Μπαρμπα-Χρήστος was a legend, a true teacher and his playing influenced me a lot during the period we were friends and performed together.”

When it comes to Melbourne especially, he describes the memories and feelings as overwhelming.

“I feel I’m coming back to yet another homeland, a place I’ve loved where memories emerge … from Victoria Market to Sydney Road in Brunswick where I lived for a year […] to my friend’s Mr Leonidas’ butcher shop Sparti, which was right next to the butcher shop Istanbul of my other friend Mustafa.”

Among other fellow artists he met and played with from Irish pubs, to Brunswick’s Retreat Hotel and clubs in St Kilda, he speaks highly of Spencer Jones and Conway Savage.

“They were representatives of the rock scene and so all this I got exposed to was a musical mosaic that I lived through day in day out, rehearsing each time with different people.”

Melbourne was also where he met Jim White, then a member of Australian rock band Dirty Three, who would invite him to join them in gigs.

White recounts of their first meeting: “It’s a funny thing, for some reason I remember that meeting very well. I met him through friends […] and I remember he was like full of communication, but we had no way of talking,” he says, explaining that back then Xylouris’ English was minimal and White could not speak any Greek.

But according to White, their communication was based on music and performing together the duo developed a strong connection.

Asked about how this relationship has evolved over the years, Xylouris gives a cheeky answer: “My English is still poor and his Greek is also bad,” he laughs.

Ahead of their Australian tour, White also feels like this is a comeback to his own roots in a way.

“It’s very exciting for me, also because when I was a kid I lived out in the desert just for a year with my family in central Australia and now we’re actually playing a show in Alice Springs – my first ever. I’ve always wanted to play in Alice Springs.”

With the drum virtuoso saying it is difficult to single out a favourite song from their new album, instead he chooses to talk about the video clip filmed for Daphne.

“We made a video with George’s mother dancing syrto in Crete and my mother dancing to it in the Australian bush outside of Melbourne. It is very nice, they’re both great dancers in their own way and I’m very happy how a simple idea came out so powerful.” Jim White's mother in a still from the video clip for 'Daphne'. 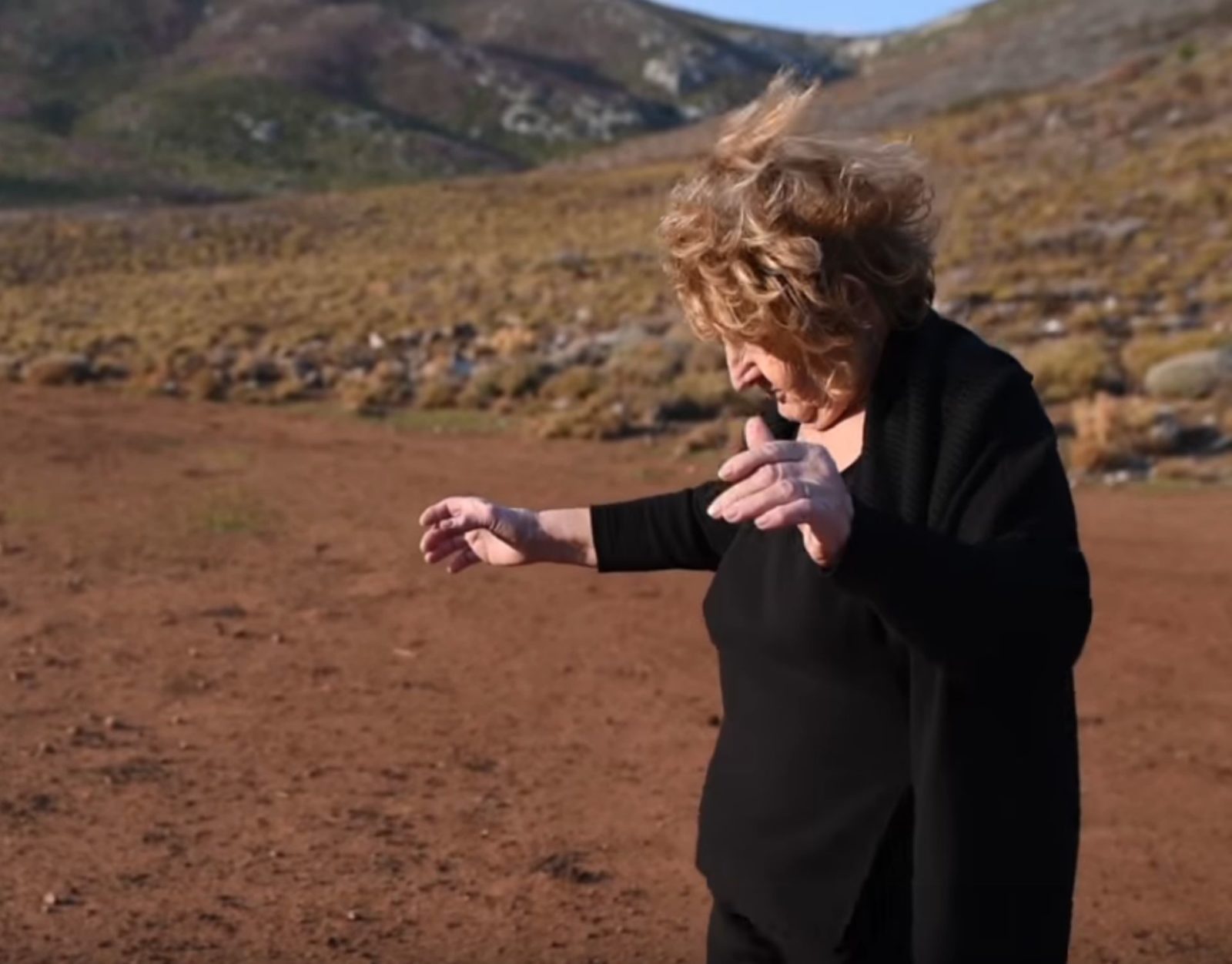 This video is arguably the most suitable imagery to complement an album titled Mother, since as Xylouris explains, part of the duo’s purpose was paying tribute to the mother figure.

“Music is in a way the mother of us all. Music is life, so we think the very fact that we live, we owe it to music as it makes us feel alive and gives meaning to whatever we experience. In a sense, the preceding two albums were the children of a trilogy, with the third one being the mother where they derive from.
“It was also a tribute to mother, we all have a mother, and accordingly to the female figure as a presence generating life, and our life is music so all this culminated to naming the album Mother.”

Xylouris White will perform in Marrickville and Springwood (New South Wales), Hyden and North Fremantle (Western Australia), Melbourne and Bentleigh East (Victoria), Darwin and Alice Springs (Northern Territory) from 20 September to 7 October. Their only Tasmanian show in Hobart is already sold out. For information on show dates, venues and tickets, visit www.xylouriswhite.com/shows