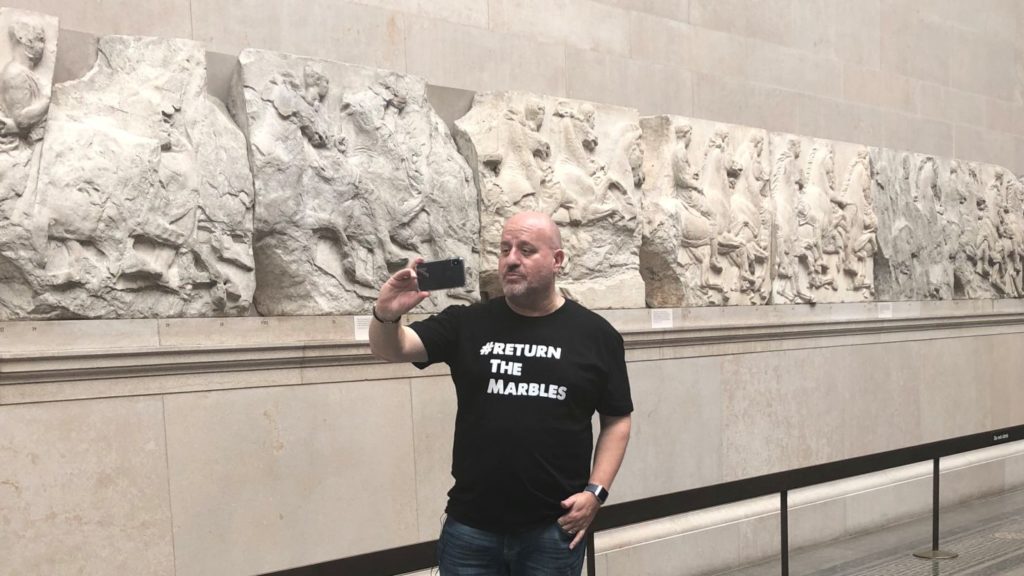 For most of the Greek people visiting the British Museum, the first moment they step into the Greek antiquity gallery and face the Parthenon Sculptures for the first time, is a highly emotional and confronting experience. For Jim Mellas, this happened on Friday 22 June. “I’ve been to Athens many many times, I’ve been to the Parthenon and the Acropolis museum, but this was my first time in London and the British Museum,” the Melbourne-based barrister tells Neos Kosmos.

“I didn’t know what to expect, and it was raw and original. On a personal level, it was a very emotional moment. They don’t belong there, they belong in Athens.”

Despite not knowing what to expect, Mr Mellas went to the museum determined. “I have been passionate about the Parthenon Marbles and what the British did for many many years and I had decided that if I ever went to London, I was going to the British Museum first to see them and second to make some sort of protest,” he explains.

“I didn’t know exactly what I was going to do.” What he did was have a T-shirt made, sporting the slogans ‘Return the marbles’ and ‘I am Greek and I want to go home’ on the front and back. “I had seen that slogan in another campaign a few years ago,” he explains.

“I thought I’m going to get the T-shirt made and I’m going to walk around London and go to the museum and see what happens.”

What happened far exceeded his expectations. The actual protest was rather uneventful. The guards were unfazed, only a tour guide showing some concern – but was quickly reassured when the barrister explained that he was not someone going around to cause trouble – while many people came and expressed their support, praising Mr Mellas for his silent protest.

The real impact of this silent protest started showing in social media. “I had decided from the beginning that if I’m going to do a protest, I would videotape it and post it on Facebook and Twitter,” he explains, “for my friends and other people to see it, but I didn’t expect the response that I got.

Within three weeks, his video was seen by more than 73,000 people, then Facebook took it down for some reason. Then in August, Mr Mellas reposted it, asking his friends to share; it quickly gathered 142,000 views. At the moment, the viral video has “got close to a quarter of a million views around the world,” according to Mr Mellas.

“And I’ve been getting about 100-200 messages away from people around the world,” he says. “Most of them come from people in Greece, also Greeks from the UK, the US and Australia, but there are a lot of non-Greeks as well sending their support.”

The video has also received some negative feedback, mostly from people in Greece saying that the country is facing other problems and has other priorities, at the moment. “It’s true, it is not the most important issue,” Mr Mellas agrees.

“But it is an issue, and the more messages I get, I feel that I’m making a small contribution to raising awareness about it. Having been to Greece a lot of times, I found that the attitude amongst the Greek people is kind of defeatist; they say ‘it would be good, but we are never getting them back’.

That is why, If we can get a grass-roots movement happening at the same time, I think it can only add to what is being done on a political level,” he says, praising the work of the groups and committees in Australia, the UK, the US and all around the world that campaign for the return of the Parthenon Scuptures.

“They are doing a great job on a political and diplomatic level,” he says, stressing the need for them to convince not only the British government, but also the Greek one, because “the Greek side is not that straightforward either,” he says.

This is where a grass-roots movement comes into. “There are hundreds of thousands of Greeks in Australia and all around the world,” he says. “If there are enough people going to the British museum with a t-shirt or making another sort of protest, maybe there will be some effect.”