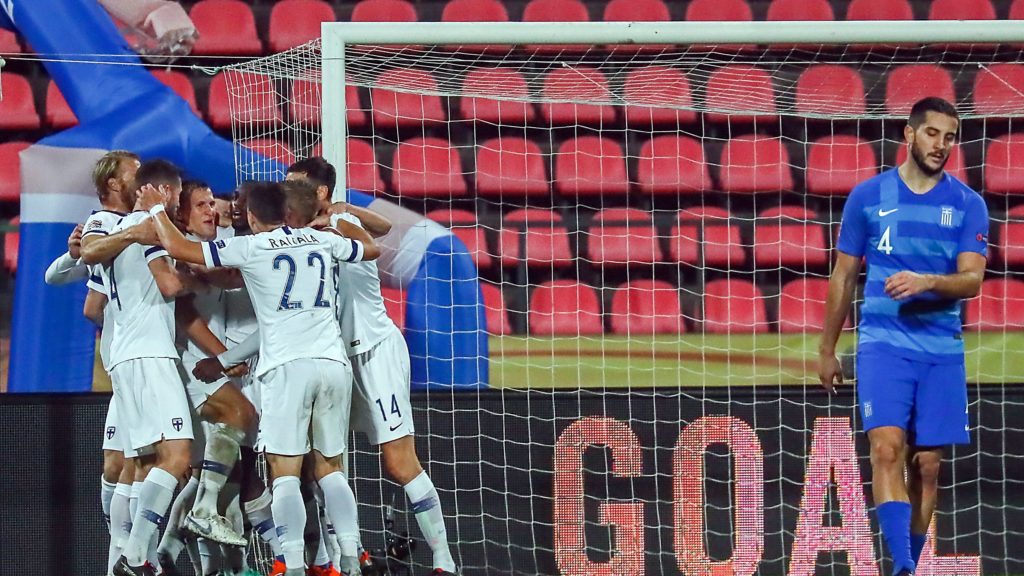 Kostas Manolas (pictured right) and his teammates were unsuccessful in stopping the attempts of the Finnish against their goal. (Photo: EPA/MAURI RATILAINEN)

Michael Skibbe isn’t enjoying a lot of support as manager of the Greek national team, after the team’s recent string of poor performances in the Nations League.

The 2-0 loss at the hands of Finland in Tampere on Monday night came on top of an already difficult situation for the Greek team, who were initially aiming to secure top spot in their group but now that seems like a faraway dream.

Skibbe chose to play Bakasetas and Pelkas on the wings, while Barkas was on goal and Mitroglou the lone forward, yet there wasn’t much possession or offensive efforts on Greece’s behalf.

Even though the Finns saw their main attacking force, Teemu Pukki, walk off with an injury after just 12 minutes of play, things didn’t improve for Greece as they seemed trapped in their own area and uninspired up front, having only a shot from Bakasetas to show off as a real opportunity.

And if that wasn’t enough, things in the second half only got worse for Skibbe and his men, after Arsenal defender Sokratis Papastathopoulos got injured and had to be replaced by Giorgos Tzavellas.

That created more open space in the Greek defence, as the latter was slower in his reactions, making an error in judgement on the 46th minute in his attempt to clear the ball, which landed on the feet of Soiri, who put it past Barkas and opened the score.

Skibbe attempted to change things and push his players forward by replacing Bakasetas with Christodoulopoulos, however not much changed, as Greece didn’t seem to have a plan on the pitch.

In the end it was Finland who found a second, as former Panathinaikos player Robin Lod crossed the ball into the area for Glen Kamara on the 89th minute, who doubled the lead for his team.

After this result, Greece has lost first place in their group and will need to change much heading into preliminaries for the Euro 2020.

In other games that took place for the Nations League, most notable was England’s 2-3 victory in Spain. In fact, Gareth Southgate’s men were in front by 0-3 in just the first half, which is a negative record for the Spanish national side.

The Netherlands were also impressive in their display against Germany, who they easily overcame by 3-0, while Italy managed to escape from Poland with a goal in injury time by Cristiano Biraghi.

Russia defeated Turkey 2-0 while the other game for Greece’s group between Estonia and Hungary ended with the impressive 3-3.