Born in Larnaca and raised in Sydney, the 18-year-old is making a name for himself, playing with one of Denmark’s leading clubs 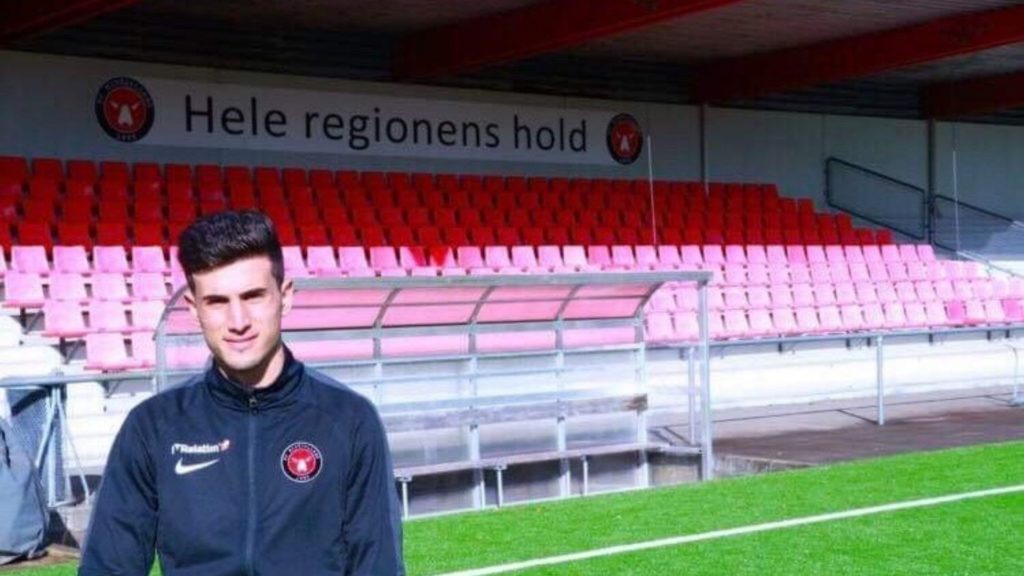 Antonis Martis’s football journey has taken him to Tottenham and Manchester City to signing a professional contract with one of Denmark’s leading clubs.

Martis, 18, has spent the past two seasons playing with Danish Super Liga Champions FC Midtjylland. The midfielder isn’t just playing regularly for the club’s U19 team, the highly rated youngster is also the vice-captain and last year he made his senior team debut for the club in a friendly game.

These impressive achievements led to the 18-year-old signing his first professional contract and the Sydney raised teenager told Neos Kosmos he is still pinching himself.

“I train with the first team quite often and have being doing so for a while. Training with the first team it’s just on another level. Going up against men and players that play in the Europa League and Champions League when we qualify there’s a lot of quality and talent. I feel comfortable training with them. You have to believe in yourself and your ability as a footballer and play with confidence.”

When he was 11, Martis spent a year with Greek club Sydney Olympic and then moved on to Bankstown Berries, before spending two years at the NSW Institute of Sport. Soon after he was selected for the Joeys, which filled him with immense pride.

“Without a doubt one of proudest moments of my life was captaining my country,” he says. “It was a great honour. I was the captain of Australia for the U16 national team and we played two tournaments, one in Cambodia and one in Vietnam. I would certainly love to wear the green and gold jersey again!”

While on national team duty a number of European scouts were impressed with the midfielder and soon after he found himself on trial with Tottenham, Manchester City and FC Midtjylland.

“I was at each English club for a week and the experience was surreal. You start the trials with some nerves but loads of excitement,” Martis says.

“Both clubs in England had amazing facilities with some very impressive training grounds. FC Midtjylland had great facilities too, but it was more of a home feeling. At FC Midtjylland you were greeted by every coach you came across and welcomed by players. As a young boy and a foreigner to that country seeing those signs of respect and acknowledgement meant a lot to me and was something that really impressed me.”

It was this kind of hospitality that made Martis decide to join FC Midtjylland, which is one of the biggest clubs in Denmark and currently sit joint top of the Danish first division.

“On the second day of the trial they had already offered me a three year contract which showed great interest in me which I really liked,” he says.

“It was a very proud moment and of course I was very happy but I also knew that this wasn’t going to be an easy ride. This was just the beginning. I knew that a lot of sacrifices had to be made and it was going to be a long road.”

“Competing against the local players in Denmark is definitely hard,” says Antonis Martis. “The coaches love their homegrown players but you have to prove to them you’re not just equally as good as them, but better than them.”

Martis was born in Larnaca, Cyprus and lived in the small village of Athienou. He moved to Australia when he was three and grew up in the South-West suburbs of Sydney and started playing football when he was four.

After signing for FC Midtjylland Martis has featured for the country of his birth a number of times and he revealed that playing for Cyprus’ youth team has been an emotional experience.

“It’s my heritage as well being born there,” he says. “It was definitely an honour and a proud day for myself and my entire family. I have played seven games to date with Cyprus against teams like Austria, Bulgaria and Romania.”

So far the games Martis has played have been friendly internationals but the teenager revealed that he will be playing for Cyprus in November’s European Championship qualifiers.

“I will play for the Euro qualifiers in a week’s time,” he says. “We will compete against Montenegro, Latvia and Russia and all the games will be held in Paphos, Cyprus.
“There’s definitely a different feeling of playing for your country of birth but with football you always want to express yourself and do well no matter if it’s with your country or your club. You always need to try and maintain a high standard of performance.”

One of the biggest challenges young Australian players face playing overseas is having to compete with hungry local players and quality internationals. But Martis revealed that making is as a professional in Europe was never going to be easy.

“Competing against the local players in Denmark is definitely hard,” he says.

“The coaches love their homegrown players but you have to prove to them you’re not just equally as good as them, but better than them. We have 12 national team players in our U19s team so there’s always a lot of competition fighting for positions and I’m always trying to prove myself as a player. If you train hard and play well they will not overlook that. I’m a big believer that hard work always gets noticed.”

Being a dual national offers Martis the chance to play international football for both the Australian and Cypriot youth teams. But when it comes to senior football a choice must be made and the 18-year-old admitted he hasn’t decided which nation he will play for as yet.

“That’s a tricky question. I love both countries. Australia is the country I’ve grown up in and it will always have a special place in my heart but also Cyprus is my country of birth and where all of my family come from. Without them this wouldn’t be possible and I wouldn’t be where I am today. I think we should let the future decide on how things will play out.”

After his recent strides the Greek Cypriot Australian is determined to fulfil his football dream.

“FC Midtjylland believes in me as a footballer and giving me a long term professional deal obviously shows great signals,” Martis says. “My focus for now is just playing in the league and in the UEFA Youth Champions League .
“My goal is to have a long and successful career as a footballer in the top five leagues in Europe, play Champions League games and to leave my mark on the game. That would be my ultimate goal and a dream fulfilled! For sure!”