Jenny Mikakos makes her pitch for the Labor Party 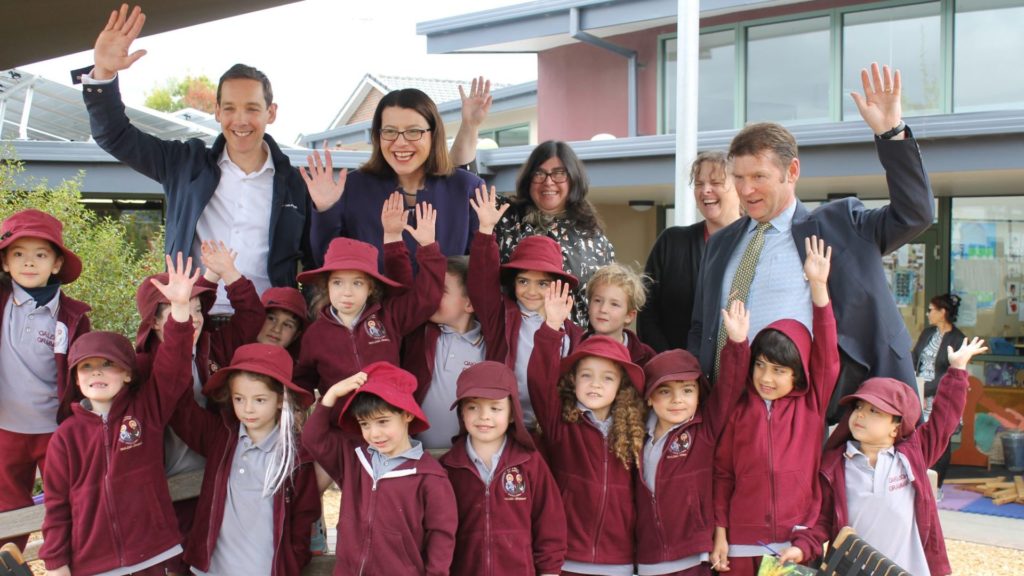 Jenny Mikakos surrounded by her favourite constituents, children. In this instance from the Oakleigh Grammar Kinder.

If Jenny Mikakos, Minister for Families and Children in the current Andrews government is re-elected in the Victorian parliament next Saturday, she will be making history once again. She has already been awarded the title of the first female politician of Greek heritage to become a minister in Australia. If re-elected she will also claim the title of the first Greek Australian female politician with 20 years of continuous service in the parliament, state or federal.

The Victorian parliament upper house comprises of 40 members, is divided into eight electorates, including the Northern Metropolitan region and each one elects five members. The Northern Metropolitan normally elects two Labor MPs, a Liberal and a Green. In the 2014 election the Green seat went to Reason’s Party, (ex Sex Party), Fiona Patten.

While pre-election polling provides some insight -albeit limited lately- on which party leads in the lower house seats, upper house is tough to predict and the results often depend on backroom preference deals.

Does that mean that Mikakos runs the risk of not getting re-elected? No, this scenario is highly unlikely. The contest in her electorate will be fierce for the fifth place; Mikakos is placed first in Labor’s ticket, so unless the ‘political world order’ of Victoria doesn’t turn upside down, she will be comfortably re-elected.

Well-known to our community, the MP presents today the case for a re-elected Labor government and her return to the Families, Children and Youth Affairs portfolio.

Which do you think are the most important issues for your constituents?

My electorate covers one-fifth of Melbourne and it has a lot of families and pensioners on low and middle incomes, who rely on good government services in key areas like education and health. That’s what Labor has always stood for – fairness and giving people access to good quality public services, without it being dependent on your bank balance.

I am proudly the daughter of a Greek bricklayer and a sandwich maker. Like many migrants, they worked hard for their children to get the best education possible. It has been a good education that has provided me with many opportunities in life. As the Minister for Early Childhood Education who has never forgotten her roots, I want to ensure that all children have those same opportunities.

I want every child to have the best chance in life, to start school ready to learn and thrive. I am proud that Labor will make Victoria the first state in Australia to offer two years of preschool. It will not only help children start school ready but parents will also save $3,500 per child in preschool fee costs. This reform will be the biggest social and education policy reform in decades and it is something I have been working on for some time.

I know that more than anything, what people want is a happy and healthy life for their children, their family and their community. That means we need to get the basics right – like having good schools and kindergartens close to home and an excellent health system so Victorians get the care they deserve. They also need access to affordable housing and a job that protects their rights as workers so they have both dignity and a positive future.

That is why Labor will build 100 new schools to enable children in our growing suburbs access to a great education as well as modernising more of our existing schools. We’re also expanding free TAFE to make 30 priority courses free, so more young people can find a good job.

Our economy is leading the nation with almost 400,000 more jobs created since Labor has been in government. This is why people want to come and live in Victoria.

We’re continuing to invest in our health system, with improved hospital and ambulance response times. Labor has committed to building or expanding 10 community hospitals in growth areas as well as creating five new emergency departments for children, including at the Northern Hospital. More nurses and more ambulances will also mean improved health care.

Labor is also focused on helping people get to all of these things safely and quickly. We’ve already removed 29 level crossings and committed to removing 75 by 2025. I’m so pleased that 10 of these are in my electorate and already some of these are finished and some are underway. We’ve built a new bridge at the Chandler Highway, fixing a longstanding bottleneck for anyone getting on or off the Eastern freeway.

Our government is already building the Metro Tunnel project, which will double the city loop enabling more trains to operate.
I know also that cost of living is a real challenge for many families and pensioners. Since Jeff Kennett and the Liberals privatised electricity and gas, prices have risen. Labor will require energy companies to offer cheaper base offers. We will also help more Victorians install solar panels on their roof by enabling them to pay half the cost back by instalments over four years whilst the government covers the other half of the cost. This will save those households hundreds of dollars in energy costs every year.

What do you offer to the Greek community within your electorate?

I’m very proud of the Greek community’s achievements in Victoria. We have such a vibrant presence in our state. Our community has a special place in my heart and I’ve been pleased to support our organisations and community members over many years. There’s nothing that makes me prouder than being called ‘our Jenny’.

Maintaining our culture and language is very important. This is why in an Australian-first, we have funded 160 Victorian kindergartens to offer language programs, including Greek, from next year. Local kindergartens in both Richmond and Alphington will offer Greek, as well as Oakleigh and Ashburton.

Labor will also provide $7.5 million to our community language schools to enable them to offer language programs to preschool-aged children for the first time. Together these initiatives will see many hundreds of children learning Greek from a very young age.

We know that multiculturalism is one of our state’s greatest strengths and it’s why we’ve continued to support Greek organisations to upgrade their facilities and to offer more programs for both young people and the elderly. We have an ageing community as well as recent migrants arriving from Greece, so they all have specific needs. This is why Labor has committed new funding to organisations like the Greek Orthodox Community of Melbourne, PRONIA and Fronditha so they can expand their facilities and services to our community.

I’ve seen so many Greek migrants work so hard, in really exhausting manual jobs, which is why I want them to have the respect and dignity they deserve in their old age.

For what reasons do you think the voters should give you their vote?

My parents taught me the importance of hard work. It’s a real honour to be able to represent Victorians in the Parliament and in Government and I have always worked hard to make a real positive difference for my electorate and our state.

Inevitably, in politics you can’t always make everyone happy because you have to make hard decisions about what is best for our state overall and decide how taxpayers’ money is best spent. What they can expect from me is that I will always work hard to make Victoria the best place in which our children can grow up in.