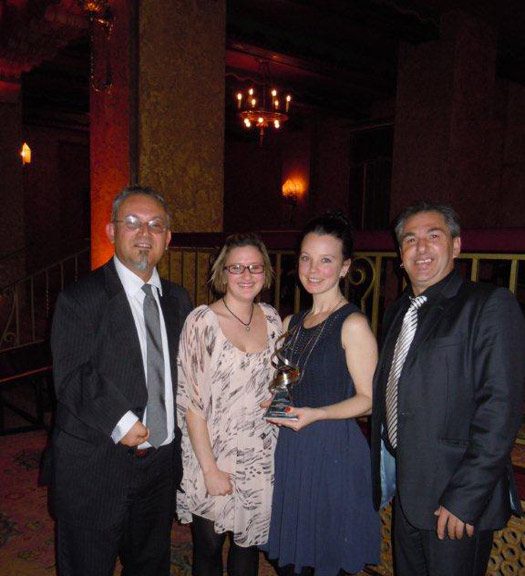 George Hatzimanolis and his team of Youth and Family Services workers were recognised for their hard work in helping young people and their families cope with and get rehabilitation in their drug and alcohol, and mental health issues. The Youth and Family Services team from Odyssey House Victoria – of which Mr Hatzimanolis is the manager – where awarded the Excellence in Services to Young People for their work on the Building Resilience in Community Schools project as part of Drug Action Week.
The Odyssey House Project Building Resilience in Community Schools places an experienced worker in community schools to provide at risk young people, their families and social workers with professional non-judgemental support and information regarding alcohol and drug use. Community schools are an alternative education setting for young people who do not fit into traditional mainstream schooling.
“These are kids who are – what we consider – high risk and [in most cases] it’s their last chance to remain engaged in education,” explains Mr Hatzimanolis. The program was awarded for its ability to recognise the need to implement alcohol and drug treatment services in community schools.
“Odyssey House has been funded to place a clinician into these schools to work with these young people,” Mr Hatzimanolis tells Neos Kosmos.
“We work with 56 per cent of the students of these community schools, and we are currently working with three community schools around Melbourne.
“53 per cent of these students attend counselling weekly, out of the 53 per cent, six per cent of our clients are homeless yet still attend school, so we’re talking the really high risk young people.”
For the past 10 to 15 years, Mr Hatzimanolis has noticed a significant difference in young people battling their addiction with drug and alcohol issues. He says as in the past, people would come into the centre with an addiction to one drug – say alcohol, marijuana or heroin – and they had the skill and knowledge to help, nowadays he is noticing a rise in poly-users; young people who take a high volume of a variety of drugs. He says this is posing a challenge for the counsellors who are noticing a rise in mental health issues because of this.
Mr Hatzimanolis tells Neos Kosmos that another challenge can affect children of ethnic communities, explaining he finds it difficult to get people involved in the programs who have a Greek background.
“They like to deal with it themselves,” he says of loved ones with a Greek background who have family members battling an addiction.
“The problem with a lot of these young people is that their parents are struggling with their own issues as well so we try to link them into specialist services for them as well.”
Mr Hatzimanolis adds that the Greek community tend to send the person with the drug or alcohol issue back to Greece with the impressions that they “come back fine” without a drug and alcohol problem.
“What they don’t realise is that drug and alcohol doesn’t discriminate; drug and alcohol are everywhere.
“When you are a drug user you will find that drug it doesn’t matter which country you are in, so what they do is send them back to Greece to their uncles, aunties, grandmothers and grandfathers but they tend to find themselves back in the city and they tend to continue their drug use and this doesn’t work. They need to be linked into a specialist service like ours.
Odyssey House is one of the largest drug and alcohol misuse organisations in Victoria. It provides a comprehensive range of community-based treatment and support services to address alcohol and other drug problems, along with any associated mental health, vocational, health, relationship and family issues. Participation in these programs is voluntary and people wanting help can self refer.
If you are dealing with a loved one with a drug and alcohol issue, Mr Hatzimanolis says: “make a phone call and get some advice and to get agencies in the region that they are able to link their son or daughter or loved one into and it’s about them looking after themselves.
“We can’t force people to attend counselling sessions, a lot of time we find it’s just about us giving support and advice to their parents and that advice is looking after themselves and how to deal with a young person living with an addiction.”
For more information on Odyssey House visit www.odysseyhouse.com.au