Crisis in the Aegean 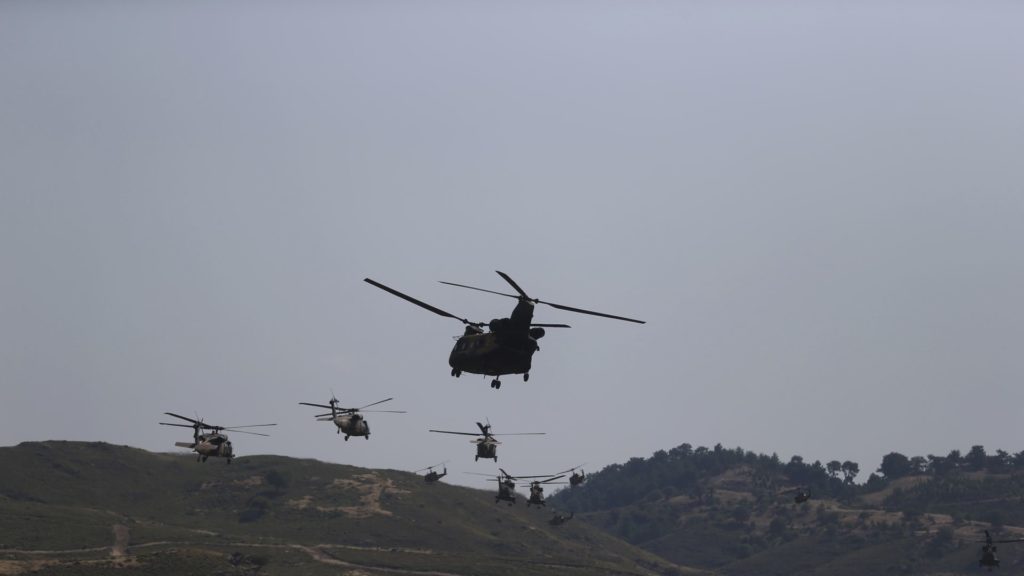 Helicopters manoeuvre during EFES 2018 drills in Seferihisar in Aegean Sea near Izmir, Turkey in May. Turkey shows off its military hardware in the EFES 2018 drill. Photo: AP/Emre Tazegul

The Aegean Sea is named after Aegeus, the King of Athens and father of Theseus. The Aegean is home to Europe’s first (and one of the oldest) civilizations in the world. Together with the Acropolis, Olympics and democracy, the Aegean islands bear an indelibly Greek stamp instantly recognisable across the world. The Aegean Sea lies between Greece and Turkey. Everyone of its thousands of islands and islets have always been inhabited by (despite numerous foreign occupations) Greeks for 4000 years.

Turkey has a land mass six times that of Greece. The Turks are not a sea faring people and the only two islands in the Aegean now populated by Turks – Imvros and Tenedos – were given to Turkey to secure control of the Dardanelles. (These were Greek inhabited islands which were to have local self- government and which Turkey covenanted to protect their Greek character. What actually happened is a tragic story for another day).

There is a legal status quo in the Aegean Sea arising from international treaties signed by Greece and Turkey and by international custom and practice. Until 1973, when oil was discovered in the northern Aegean, Turkey, on the whole, respected and recognized the status quo and did not exhibit any expansionary designs. Since then, Turkey invaded and occupied Cyprus in 1974; and has engaged in a series of provocative actions questioning the limits of Greek territorial waters, the Greek continental shelf and exclusive economic zone and Greece’s air space. Its repeated overflying Greek rocky islets and incidents involving coastguard vessels and aerial dogfights with a number of fatalities are part of a deliberate policy to assert that there are “grey zones” in the Aegean which much be settled between Greece and Turkey. There have been serious incidents in 1987, 1996 and more recently that have brought the two countries to the brink of war and permanently threaten the peace and security in the region. On average Turkey violates Greek airspace about 2000 times a year. If there are differences in the interpretation of the legal status in the Aegean this should be adjudicated by the ICJ or discussed in bilateral negotiations between the two countries. If, however, there are Turkish designs on the Aegean or on Greek territory then there can be no bilateral discussions as no country will ever negotiate its sovereign rights.

Therefore, the pertinent question is “what is the legal position in the Aegean?”

The Treaty of Lausanne, signed on 24th July on 1923 after the disastrous Greco-Turkish war of 1919-1922, defined the legal status of the Aegean islands. Apart from Greece and Turkey it was co-signed by Great Britain, France, Japan, Italy and other countries and has unquestioned validity. It must be stressed that the Treaty of Lausanne was imposed on Greece as the defeated party and accommodated Turkey as the victor. Pursuant to article 12 of the Treaty , ALL the Aegean islands except Imvros and Tenedos (and those ceded to Italy under article 15) are ceded to Greece. This Article also states:

” Except where a provision to the contrary is contained in the present Treaty, the islands situated at less than 3 miles from the Asiatic coast remain under Turkish sovereignty”

Article 15 provides :
“Turkey renounces in favour of Italy ALL rights and title over the following islands : Astypalea, Halki, Kalymnos, Karpathos, Kassos, Kos, Leros, Lipsos, Nissiros, Patmos, Rhodes, Simi, Tilos, which are now occupied by Italy, and the islets dependent thereon , and also over the island of Castellorizo. ”

After its defeat in WWII Italy ceded the Dodecanese to Greece pursuant to Article 14 of the Peace Treaty signed on 10th February 1947:
” Italy cedes to Greece in full sovereignty the islands of the Dodecanese”

Accordingly, these two treaties succinctly defined the legal status of all Aegean islands and islets. In addition the Geneva Convention of 1958 and The Law of the Sea Convention of 1982 state that islands have their own continental shelf. Turkey, although not a signatory to the latter, is bound by its provisions. Turkey knows this. It has therefore deliberately created confusion over airspace, territorial waters, continental shelf, exclusive economic zone and uninhabited rocky islets. Why?

Simply put, Turkish foreign policy has changed and it seeks a revision of the legal status in the Aegean. In other words Turkey wants to share the Aegean which would mean Greece would have to surrender its sovereign rights guaranteed to it by international law.

Further, the Turkish government and parliament have expressly threatened Greece with war should Greece extend its territorial waters to 12 nautical miles. The right to 12 miles accrues from The Law of The Sea Convention of December 1982. Indeed, Turkey has extended its territorial waters in the Black Sea and its southern Mediterranean coast but threatens Greece if it does the same!

Similarly, The International Civil Aviation Organisation (ICAO) has divided international airspace where air traffic is exercised. Flight Information Regions (FIR) were drawn up in Paris in 1952 and Geneva in 1958. Turkey was present at both meetings and accepted the ICAO plans which defined the limits of the Athen FIR.

Its Eastern limits extend to the Greek. Turkish border (between the eastern Aegean islands and the Turkish mainland) . Thus, according to international law all civil and military aircraft flying west from Turkey must file flight plans and report their position as soon as they cross the FIR limits between Greece and Turkey. It should also be noted that Greece has been assigned operational control over the entire Aegean airspace by NATO.

If all the above were not enough the discovery of potentially large quantities of natural gas in the Eastern Mediterranean have added another dispute in the complex Greco-Turkish relationship. Once again the international law relating to the exclusive economic zone is against Turkey but Turkey refuses to accept international law. It insists on ignoring Castellorizo and draws up maps with its version of how the zones should be demarcated. By letter dated 27th March 2018 to the United Nations Turkey asserts its rights to the entire continental shelf from western Cyprus (longitude 32 16 E) to Crete and Rhodes. Regrettably, Turkey is adamantly rejecting the opportunity of resolving the Cyprus issue whereby all Cypriots and Turkey too, could benefit from the exploitation of the natural gas resources and pipeline to Europe. Instead, Turkey has sent a vessel to drill in the Cypriot EEZ. (It recently spent 200 million dollars to purchase a state of the art modern drilling vessel – “Deep Sea Metro 2”). This not only openly challenges the Republic of Cyprus’ sovereign rights but will also markedly escalate tension in the area. Further, it demonstrates why Turkey will not withdraw as a guarantor power and intends to always control Cyprus militarily and strategically by land and sea.

We have seen a gradual escalation from 1973 when Turkey first disputed the continental shelf in the Aegean to 2018 when its politicians claim that islands are under Greek occupation. We should not be under the misapprehension that this is “Sultan” Erdogan’s dream to revive the Ottoman Empire. For 45 years now the Kemalist policy has been adopted by all Turkish parties by coining the expression “grey zones” which has gradually gained acceptance. This is the result of successive Greek governments not going to the ICJ.

Some quotes from successive Turkish leaders will confirm that this is a national Turkish policy :

“The Aegean belongs to both countries…half and half why doesn’t Greece want to share it? We must share it!” Former Foreign Minister Mumtaz Soysal

In summary Turkey has deliberately and dangerously escalated the existing tension by:

(1) Repeatedly carrying out naval exercises off Castellorizo and in the Cypriot EEZ.

(2) Responding to Greece’s announcement that it would extend its territorial waters in the Ionian Sea and elsewhere to 12 miles by announcing it would prevent the extension to 12 miles in the Aegean and that the Casus Belli passed by the Turkish Parliament is in force.

(3) Asserting that Greece and Cyprus do not have a common sea border and that the Eastern Mediterranean must be divided on the principle of the median line between Turkey and Egypt.

(4) Insisting on establishing a special status in the Aegean not subject to international law.

(5) Applying pressure so as to avoid a final delineation of the EEZ between Greece and Egypt in the region of Castellorizo.

(6) The deliberate ramming of a Greek naval vessel, increased violations of Greek airspace and overflying of Greek islands.

The geopolitical situation in the region is changing rapidly for the first time since WWII.

The Aegean Sea unites Greece and Turkey. It should be a sea of peace. There should be no crisis. Differences, if any, can be resolved through the application of international law not through threats or overt designs on Greek and Cypriot sovereign rights that cannot be negotiated or tolerated.