Melbourne a ‘second home’ for Sakkari and Tsitsipas 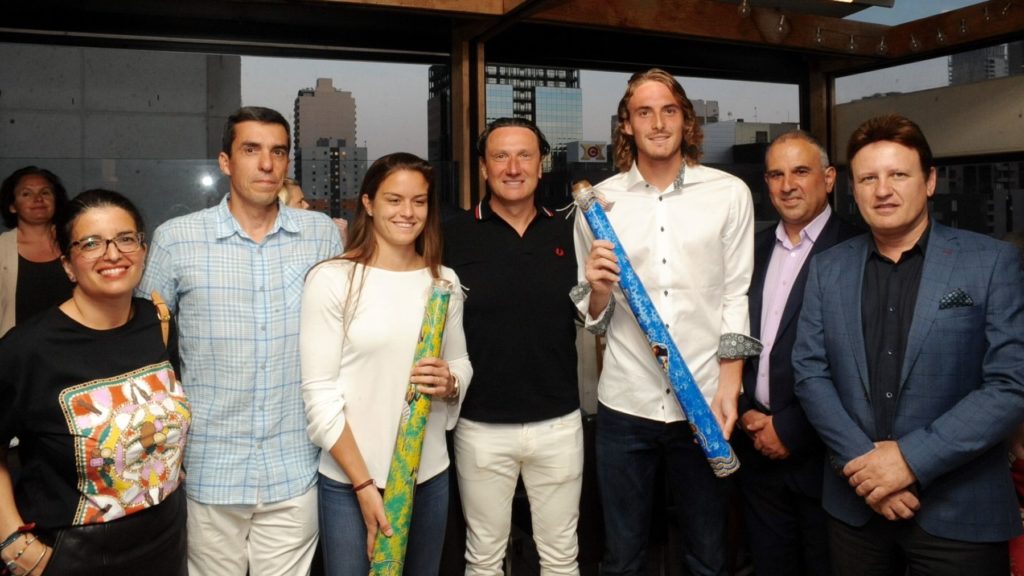 Sakkari and Tsitsipas are presented with commemorative gifts by Consul General, Dimitris Michalopoulos, second from left, and the president of the Greek community, Bill Papastergiadis (centre). Photo: Con Deves

Greek tennis stars Maria Sakkari and Stefanos Tsitsipas took some time off the courts on Saturday to attend a Greek community event in their honour before beginning their Australian Open campaign this week.

The two athletes appeared to be in high spirits at the dinner, arranged by the Consul General of Greece, Mr Dimitirs Michalopoulos and the Greek Community of Melbourne and Victoria.

The pair didn’t turn down anyone who might want to get their picture taken with them or to simply have a chat about their thoughts on Australia and their prospects at this year’s Open.

The athletes enjoyed the warmth that the Greeks of Melbourne have embraced them with: “This is an amazing city, I feel right at home here,” said Tsitsipas. “Yesterday (Friday) I was at the airport and I had this feeling of rejuvenation when I arrived, as if I’ve returned to the place where it all began. The people here are very pleasant, very open and as we all know there’s a huge community, something that makes it even more special for me to play here,” Tsitsipas continued.

Maria Sakkari was on the same wavelength: “This is such a wonderful feeling. To be shown so much love by people is something beautiful and really amazing.”

Sakkari has her work cut out for her, facing 2017 French Open champion Jelena Ostapenko in the first round. Yet the 23-year-old maintains her composure: “I’m very positive. She’s a strong opponent but I have faith for the best. As a general rule, I don’t like to make big statements, I like to take it one game at a time. But I’m in very good shape.”

Stefanos Tsitsipas will also have to dig deep if he is to overcome the obstacle that is world number 54 Matteo Berretini, although sees the opportunity and appears to be mentally prepared: “In this tournament, all the players are the same, no matter their ranking or previous results. It’s important for me to take each one of them seriously, they can all perform greatly, so with that in mind, this will definitely be a difficult game. He is the favorite and I just need to do my job and be a professional at what I do.”

When asked about last year, when he was able to triumph over some of the greatest athletes in the sport such as Novak Djokovic, and if he has a secret behind his stream of successes, Tsitsipas was simple yet direct in his approach: “The secret is to forget who’s on the other side of the court and to focus on the ball, on the net, on the lines of the court and on myself, nothing else.”

The president of the Greek community of Melbourne, Bill Papastergiadis was also present at the dinner and remarked on the pairs great character, aside from their athletic achievements: “They represent everything that’s noble and worthy from Greece. Not only are they great sportsmen, they’re also great ambassadors of Greece, of their sport and of the country. It is a privilege to have them near us. And it’s remarkable that, with only two days before the commencement of their games, they’re prepared to spend three hours at the Greek community building, learning more about what we do and the diaspora, about the ambitions and dreams and desires of our children and also telling us about their own journey.”

The Consul General Mr Michalopoulos appeared optimistic in regards to the future of the two star athletes in the Australian Open, basing his opinion on the continued success of Greek sport: “The support of all the Greeks of Melbourne and of course those from back home is a given. I believe in a good result for both these kids. They deserve it and our country itself deserves it. We’ve seen Greek athletics taking great bounds in the past few years. We’ve seen Petrounias glorify Greece no matter where he competes. So why not in the highly demanding sport of tennis, that requires not only a good physical condition, but also a good mental condition and preparation.”

Both the Consul General and the president of the Greek community offered commemorative gifts to Tsitsipas and Sakkari, who in turn expressed their gratitude and hope that they will have the full support of the community in their upcoming matches.