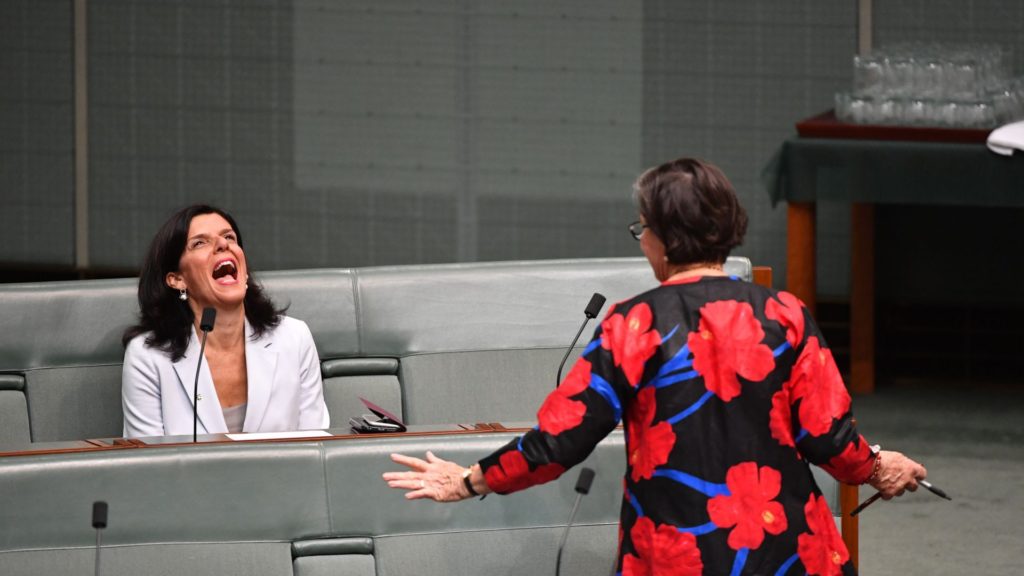 After her resignation from the Liberal Party, which she accused of bullying and anti-women behaviour, Julia Banks is hoping to have the last laugh. Photo: AAP Image/ Mick Tsikas

When she resigned from the Liberal party in August, following the turmoil of the party’s leadership spill, now Independent MP Julia Banks said that she would not contest the seat of Chisholm.

What she didn’t say was that she was going to run for a seat in another electorate. Today, she officially announced her decision to contest the seat of Flinders, running as an Independent against Health Minister Greg Hunt.

The Greek Australian MP is now the second former Liberal to run against a sitting Minister, after yesterday’s announcement that Oliver Yates, former head of the Clean Energy Finance Corporation, has decided to challenge federal Treasurer Josh Frydenberg for his Victorian seat.

Both these motions are seen as ploys to punish those involved in the leadership spill that saw Malcolm Turnbull being replaced by Scott Morrison. When Julia Banks announced her decision to become independent, part of the media estimated that she became “the government’s own Lady Vengeance.”

These same analysts now see Malcolm Turnbull as the orchestrator of what seems like a ‘centrist’ movement against the hard-right within the Coalition. The main target of this campaign is former PM Tony Abbott, whose Warringah seat is already challenged by a small army of contenders, from Indigenous broadcaster Susan Moylan-Coombs and Olympics ski champion turned barrister Zali Steggall to former Turnbull staffer Alice Thompson.

What most of these candidates have in common is a shared commitment to put climate change at the centre of the election debate, thus attacking the Coalition conservatives’ attachment to the fossil fuel industry.

“Climate change is not only real – it is happening,” Ms Banks said in her statement.

“Clean renewable energy is the future. It will be cheaper, healthier and better for our environment and effective climate change action policy is an urgent imperative.”

The Greek Australian MP also outlined her bonds with the Flinders electorate, stating that she owns a family home on the Mornington Peninsula, which has brought her close to the local community “with its unique and beautiful environment and its warm, caring and friendly residents who have a strong sense of community.”

She also thanked the “diverse, warm, embracing and vibrant” community of Chisholm, promising to fulfill her obligations and responsibilities to them for the duration of this term of Government.

In her statement, Ms Banks also reaffirmed the position at the “sensible centre” although she refrained from repeating her view that it is the Coalition that has changed, as in her resignation statement.

Julia Banks has become a headache for PM Scott Morrison since her resignation from the Coalition, effectively turning his government a minority one, but this decision might prove to be an even more serious blow.

The Coalition is lagging behind in polls and despite the fact that Greg Hunt won the Flinders seat with a 7 per cent margin, he has every reason to be concerned by Julia Banks decision. After all, she is the one who secured Malcolm Turnbull’s majority government in 2016, being the only Coalition candidate to take a seat from Labor, even by a margin of 1.6 percent.

The Independent MP will have another chance to put pressure on the Government on 12 February when the House of Representatives will be called to vote on the Urgent Medical Treatment Bill to get sick people in offshore detention to Australian hospitals to save their lives. Julia Banks is one of the bill’s original co-sponsors. “After the leadership coup last year I announced I would not be recontesting the seat of Chisholm at the next elextion and that I would be an Independent Member of the House of Representatives. I confirm today that I am not running as a candidate in Chisholm at the forthcoming election. I will continue to do my utmost to fulfill my obligations and responsibilities to the people of Chisholm for the duration of this term of Government and I will manage this period with respect and professionalism.

“The Chisholm community is diverse, warm, embracing and vibrant and I warlmly thank them for their support and goodwill throughout my term. Most importantly I look forward to maintaining the ongoing wonderful connections and friendships I have with the people of Chisholm.

“Over the summer, I deeply considered and reflected on my future career path. On a personal level my husband Mike and I look forward to our time at our family home on the Mornington Peninsula which we’ve had for over 20 years – it has been and shall always remain an irreplaceable part of our lives. My parents also lived on the Peninsula for many years and as my children grew up I’ve had the joy of being a part of the local community with its unique and beautiful environment and its warm, caring and friendly residents who have a strong sense of community.

“Over recent months I’ve had many discussions with family, friends and locals across the Flinders electorate and everyone I spoke with were supportive and respected my decision of last year and expressed their frustration at the major party dysfunction, combative politics and game playing.

“No matter where we live, local communities are the heart and soul of our great country. It’s important that the people of Flinders are not taken for granted and have a strong Independent representative who listens, gives it their all and takes pride in being their voice.

“I realised that everything I’ve stood and fought for my entire adult life intersects with the moment in time in Australia. There’s still work to be done and unfinished business. I’ve decided I’m staying in this race. I intend to run as an Independent candidate for Flinders at the next election.

“I’ve always given 100% and this will be no different. My values are in the sensible centre and at the core of what I stand for. I’ll always support policies which reflect economic responsibility whilst being socially progressive. Supporting those who work hard and have worked hard for their financial independence and deserve to enjoy the fruits of their labour, ensuring the best possible aged care, childcare, health and education services.

“Climate change is not only real – it is happening. Clean renewable energy is the future. It will be cheaper, healthier and better for our environment and effective climate change action policy is an urgent imperative . In relation to refugees I’ll alwasy be an advocate for a humanitarian approach which is the essence of our compassionate character as Australians. And I’ll continue focused advocacy on gender equality, fair and equitable workplace cultures and equal representation of women in leadership positions.

“The optimism and goodwill of the Australian people is second to none and it would be my profound honour to represent the people of Flinders in our Federal Parliament. “