Karl Lagerfeld: the designer, the man, and his love for ancient Greece In the wake of Karl Lagerfeld’s death on 19 February at age 85, the fashion world reminisces both his best and worst moments.

The controversial but undeniably talented creative director of Chanel and Fendi since 1983 and 1965 respectively, the prolific creative lived a roller-coaster of a life and was the one that defined luxury fashion.

WHO WAS KARL LAGERFELD

A polyglot in real life and astoundingly able to ‘speak’ in several different styles and trends, he’s never not created an original and unique collection reflecting each brand’s identity.

Lagerfeld, who was also a photographer, unlike most of his peers worked until his very last days designing an average of 14 collections per year.

Self-identified as a “caricature” the “Kaiser” loved provoking his peers, celebrities and the media alike with his -often offensive- comments.

Truth be told, while many hated his personality, several fashion critics were under the suspicion that the obnoxious part of his personality was an act or an ode to loneliness.

“I’m very much down to earth. Just not this earth,” he once said. “I don’t want to be real in other people’s lives. I want to be an apparition.”

Following the death of his long time partner Jacques De Bascher of AIDS, with whom he spent over two decades but never had sex with, Lagerfeld gave up on love. In the 1970s De Bascher was involved in an affair with Saint Laurent, who rumour has it he kept seeing even during his relationship with Lagerfeld.

Thank you everyone for your words of condolence. 😿 With a once cold but now simply broken heart, I am going into mourning. I pray that your kind words and well-wishes will help me to put my best paw forward in my future without Daddy @KarlLagerfeld & as my own woman.

Since De Bascher’s passing, the designer lived alone in a Left Bank apartment with over 300,000 books and his Birman cat, the famous Choupette.

The entire world knew of his love for his cat who he said he’d marry if he could. Choupette, who survived her master is the wealthiest cat in the world and even has her own Instagram account. Choupette “has her own little fortune, she’s an heiress,” said the designer a few months ago stressing that the feline changed his life and made him a better person.

Other than his platonic love for another man and a cat, the fashion mogul had deep feelings for a civilisation. 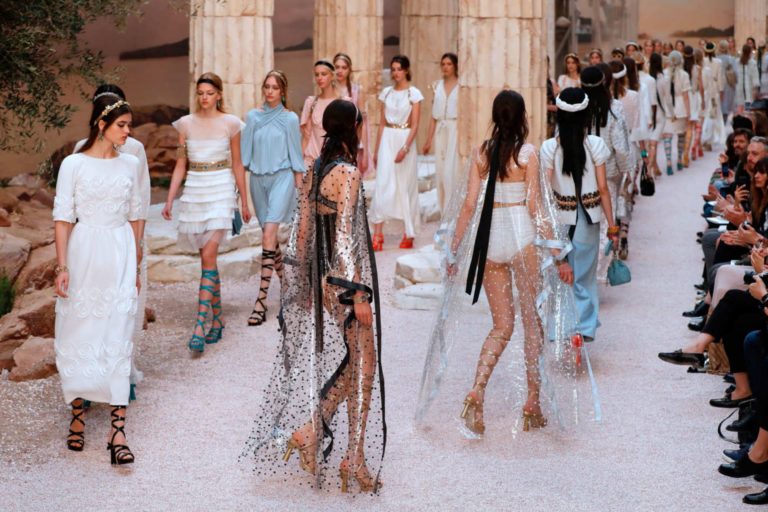 HIS LOVE FOR GREEK ANTIQUITY

While he would traditionally select an impressive and usually exotic location to stage his Chanel Resort shows each season, for his 2018 Cruise collection he chose to stay at the Grand Palais; he, however, transformed it into a mini Ancient Greece decorating the space with Ionic columns and even a floor-to-ceiling painting of a Greek sunset in the background. Meanwhile, at the end of last year, Lagerfeld also debuted his first series of sculptural works again inspired by ancient Greece in a special exhibition at Carpenters Workshop Gallery in Paris which remained open from October till 22 December 2018.

The capsule collection, titled ‘Architectures’ featured a series of functional sculptures—ideal for interior design inspired by Hellenic artefacts from antiquity that the iconic fashion designer had always been enthralled with. Lagerfeld had designed gueridons, tables, lamps, consoles, and mirrors that were carried out by acclaimed architect Aline Asmar d’Amman who personally oversaw the creation of the sculptures.