Windows to her soul 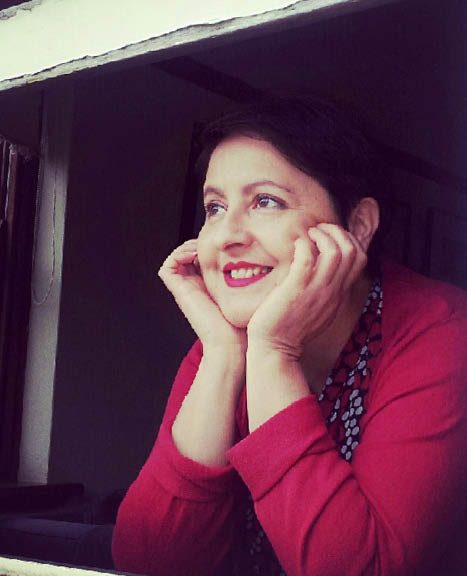 It’s funny that two Greek Australian women chose the very Italian Lygon Street to meet over coffee and a chat. And as we sit sipping on our Italian coffee, the conversation lends itself towards Greek language, culture and community. Yet the conversation is juxtaposed against the smell of the cafe – basil, tomato sugo and a baked lasagne that’s fresh out of the oven. The differences in conversation to what I am experience through my sense of smell are worlds apart – talking about Hellenism yet imaging the busy streets of Rome and wanting to throw a coin and make a wish in the Fontana Di Trevi. And it’s that sense of smell, the way the conscious mind perceives things and picks up on olfactory clues what was crystallized Hariklia’s main character Chrissie in her novella All Windows Open. Chrissie has anosmia; put simply, she can’t smell.
Hariklia first came about this affliction when choosing a gift for her daughter’s teacher. When she suggested perfume, she was surprised by her daughter’s response; “Mrs Mac can’t smell”.
“I found it so interesting,” explains the author, “and thought wouldn’t it be interesting if the character had that affliction. Would it mean that she missed out on some subliminal things in life because of smell? Signs that we pick up on because we can smell, but some things you don’t perceive on a conscious level. I thought if you didn’t have a sense of smell are there things you miss out on?” she asks.
As a writer, Hariklia is always on the look out for interesting truths, stories, on everyday life to create another layer for her characters. She wants to explore and expose and get in the minds of everyday people while she writes. To her everyone is fascinating. And even though I was running a couple of minutes late, to a writer that’s a gold mine. It gives her more time to eavesdrop on conversations as to her, people are so interesting. That’s why she always carries a notebook; to write these ideas down.
“I write down all the things my daughter says and sometimes we read over it and she laughs her head off,” says Hariklia who says as a writer, you truly don’t switch off – family included.
To Harilkia, her characters are everyday people and the stories centre around the most important things in life – relationships. From your siblings, to your partner, children and your parents, flatmates to workmates – this is what makes her tick.
“I write about love and relationships, often through a cross cultural filter, with ironic humour,” she says.
But with that, her writing also explores multicultural themes from the perspective of a second generation Greek woman – the child of immigrants, just like Chrissie in the book who herself is struggling with her identity and growing up in Australia. Yet although this is what gives her character layer and depth, the fundamental issue of love and relationships is what the book centres around.
“My publisher asked me to write some stories that aren’t about the Greek community so people don’t pigeonhole you and I have done that but I think the Greek Australian gives my characters an extra layer,” she says but adds that she feels “she can’t not write about [being Greek] as it’s a big part of [who she is]”.
The first born of two immigrants, Hariklia didn’t know how to speak English when she started school. Both her parents spoke to her in Greek, they associated with Greek people, there was no television set in their house in Thornbury, so a young five-year-old Hariklia started her first day of primary school without a word of English. And yet now, the problem is she can’t speak Greek as well as she did. Hariklia’s journey herself as a Greek Australian is where she draws inspiration, from the pain of her early days at school, to identity struggles, to making the decision to send her daughter to Greek school and Greek dancing are all themes of her life that she explores in writing.
It’s important to note how this author started writing. On a trip to Greece as a ten-year-old, her Aunt Alexandra gave her a diary to record her trip and experience. Unbeknownst to her aunt, or even Hariklia, it would be a habit that she would keep up for twenty years. She wrote about anything and everything, chronicling her daily life, which spawned several semi-autobiographical short stories and the ever-contagious read What She Said; a blog that sees the author posts entries from one of the diaries she has kept from 1970 to the present, that was written on the same day – date and month.
For now, the author is set to launch All Windows Open the novella with seven short stories included. The novella began as her creative thesis at university under the name Sense and Serendipity; an homage to author Jane Austen because like her heroines, Chrissie is looking for the right guy, there’s the family connection and the writing style, funny and a bit ironic. But her publisher had other thoughts. After reading a scene in the book where George, the love interest, barges into Chrissie’s room drunk and starts reciting a Yiannis Ritsos poem he knew right there the title had to be an homage to the poem; the poet but importantly, and wisely chosen by Hariklia, to introduce the readers to contemporary Greek culture.
“A lot of great Greek writers and poets are contemporary; it’s not all 2000 years ago and ancient Greek poets,” she says. “I am glad I made reference to him and maybe some people will look him up and realise what a great writer he was.”
All Windows Open will be officially launched on Sunday 19 August at 3:00 pm at the Greek Orthodox Community Centre, 168 Lonsdale Street, Melbourne. To attend email hariklia.h@gmail.com