The phenomenon occurred mainly between 1950 and 1975, when young Greek women -some of them in their early teens- were being shipped Down Under to be married to men they had never met.

They arrived in Australia on “bride ships” to be greeted on the dock by men holding flowers in anticipation of starting families. It is those stories, that Dr Nazou will present to to Sydney’s Greek Australian community on Sunday 17 March, at the Beta Bar (level 1, 238 Castlereagh St). Readings will take place by SBS Insight’s Jenny Brockie, and journalist and academic Helen Vatsikopoulos.

“Imagine you are a young woman, even a teenager. You are told by your family that they have found you a husband, a man you have never met who lives on the other side of the world. Imagine too, that you travel willingly, or maybe reluctantly and then spend rest of your life with this stranger,” Dr Nazou explains.

READ MORE: Not all arranged marriages were happy

The study attempts its interpretation from the perspective of oral history, gender studies and cultural-critical theory. Its primary material is drawn from personal testimonies given in the form of interviews to the writer by a number of the brides themselves. 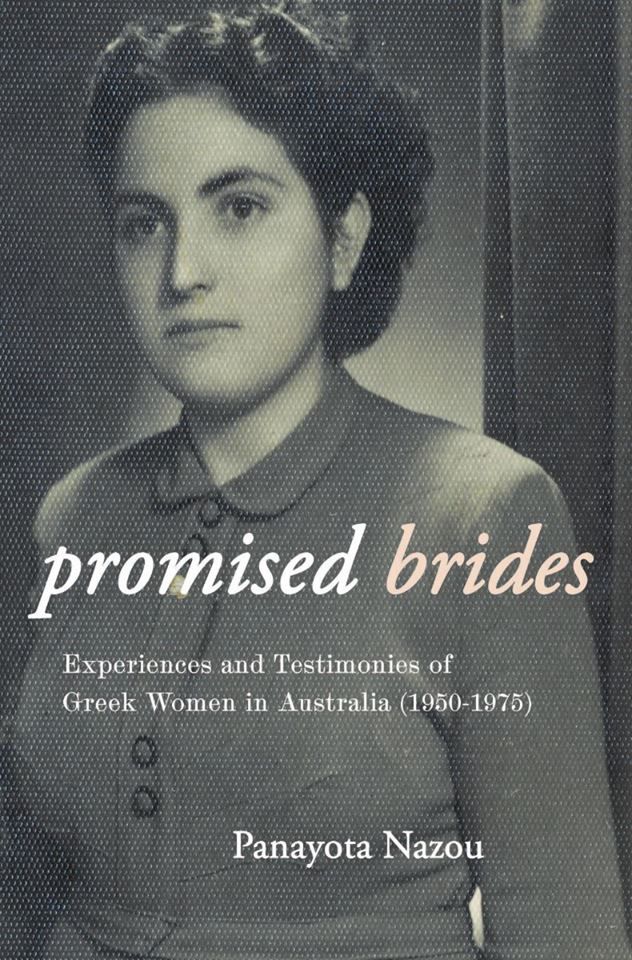 The book seeks to cover an immense gap in the existing bibliography by closely studying the individuality of the women themselves and the way they felt, reacted and experienced the reality of an arranged marriage with a man they had not ever seen before.

The women’s stories are recorded in this heart wrenching book that includes the photographs they exchanged during their long-distance betrothal, letters of introduction and most importantly, the voices of the women themselves as they look back on the custom of matchmaking (proxenio) over which they had little say.

Other than a great piece of literature, treading into the realm of short story novela, the book consists at the same time a cultural exploration of the experience of migration itself which is evident throughout the testimonies, giving a much needed outline of the social and psychological background of those ‘brides’ and theit emotional state.

What is remarkable in the way Dr Nazou has chosen to transfer the oral testimonies into a book, is her effort to portray them as individual personalities, by following their personal adventure, exploring their existential ambivalence and finally understanding through them the social, cultural and political function of the institution of arranged marriage. It is also noteworthy that most of the women spoke frankly and openly about the process to Dr Nazou and only 2 of the 21 women requested anonymity.

The study is considered to be one of the most important cultural and historiographical piece of evidence that will help better shape historians’ knowledge of the Greek migration to Australia and how the bonds that shaped the community were formulated.

“I put on my wedding dress, all alone, in front of a mirror, and cried bitter tears (…) When I saw him, instead of warming, my heart froze. Because the man I saw in front of me was completely different to the man in the photo.”

“My brother-in-law saw me, liked me, and came straight to the point. He told me that he had a brother in Australia and he wants me to send him a girl.” Margarita Farmakis

“When I came here, I not only didn’t find what had been promised, I found nothing. But I didn’t regret my decision to come.” Fani Minas

“When he realised that I was a virgin, he said to me, “Your parents must be the proudest parents in the world.” I believe that because of this, he loved me even more.” Sofia Sfikas

“For the marriage to succeed I had to be like an animal, without my own personality. I had to accept whatever he said to me.” Anonymous 2

“For the first night, my koumbara had prepared her own bed for me so I could sleep with my fiancé. It left a terrible darkness in me, a weight. It was as if he was raping me… What can I tell you? Even up to the moment he died, I never loved him. ” E.L.

After the launch books will be available at http://www.bilingualbookshop.com.au