Diatribe: The other 1821 revolution 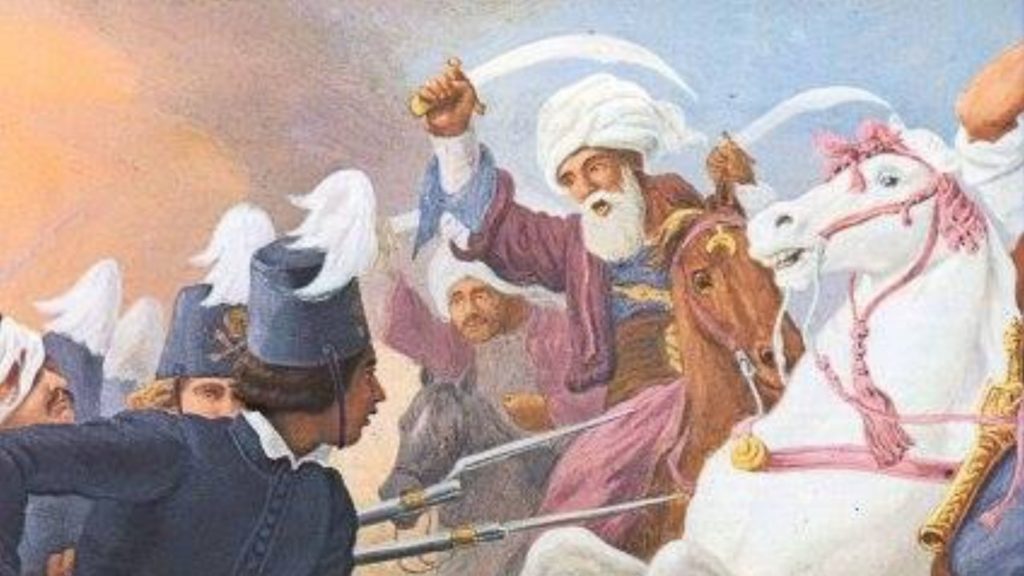 ‘The Battle of Dragashani’, an artwork by Von Hess

The Greek Revolution was first proclaimed by Ypsilantis, as head of the Philiki Etairia, in Moldavia. Both Romanian speaking lands, Wallachia and Moldavia, were ruled by influential Greek families from the Phanar district of Constantinople, on behalf of the Ottomans. They had influence, power and money. For the thousands of Greeks that flocked to these semi-autonomous provinces in search of stability, equality and economic opportunity, Moldo-Wallachia was a veritable promised land, a colony of unlimited scope for profit.

Planning the Greek revolution in Romania was thus perfectly plausible. There was already a well-established network of high ranking Greek bureaucrats and notables who had been sworn into the Philiki Etairia, along with Romanian boyars who could provide resources, manpower but most importantly, cover for the surreptitious preparations. Thus, the Philiki Etairia was multi ethnic, including not only the influential captains Giorgakis Olympios and Ioannis Farmakis, but also boyars Alecu Filipescu-Vulpea, Grigore Brâncoveanu, Tudor Vladimirescu, Russian consul Alexander Pini, the Bulgarian Pavel Macedonski, the Albanian Naum Bredhi, who went on to publish the first manifesto of Albanian nationalism. Ypsilantis, had every reason to believe that when the time came, the Orthodox Christians of the Moldo-Wallachian lands, would rise as one to expel the Turks.

Yet they did not. When Vasileios Karavias occupied Galati and aorganised pogrom of the local Turks, the native Moldavians fled the city and their boyars, shocked by the violence, refused to join the revolutionary Sacred Band. Why? Because, considering their Phanariot rulers to be exploitative, they were more anti-Greek than anti-Turk.

In Wallachia, to the south, Ypsilantis had cause to believe that he could rely on the co-operation of Tudor Vladimirescu, a significant military power broker. What he could not appreciate, was the level of resentment held by Vladimirescu and most Wallachians against Phanariot rule, and by extension, Hellenism and the Hellenisation of the Romanians. Vladimirescu held that the Greek rulers, who were corrupt, purchased their positions through bribery and fleeced the country in order to recoup their expenses, had stunted Romanian nationalism, with their emphasis on a common Eastern Orthodox identity. Furthermore, at least ideologically if not in practice, Vladimirescu railed against the oppression of the poor. He believed it was necessary not only to get rid of the Greeks, as agents of Turkish oppression, but also the boyars who oppressed the lower classes as well. For this reason, when he did revolt, as Ottomanist Kemal Karpat suggests, the Ottomans interpreted it as a local uprising aimed chiefly at the protection of the local population against Greek exploitation.

Nonetheless, Vladimirescu’s 1821 revolt could not have taken place without the Philiki Etairia. Romanian historian Andrei Otetea writes that his movement cannot be separated from the Etairia, who gave it “a chief, a program, a structure, the original impulse, tactics for propaganda and combat, [and] the first means of achieving its goals”. Otetea also claims that Vladimirescu was indirectly influenced by the political vision of Rigas Feraios.

It was thus the Philiki Etairia that suggested that Tudor Vladimirescu organise a revolt in the region of Oltenia, as a way of obfuscating the Greek insurrection: a ruse conceived by Vladimirescu’s friend, Yiorgakis Olympios. Yet when Vladimirescu raised the flag of revolt (paradoxically, his flag was blue and white, whereas that of the Greeks was red, black and white), on 22 January 1821, proclaiming: “There is no law that would prevent a man from meeting evil with evil,” he also wrote a letter to the Sultan proclaiming that his revolt was anti-boyar rather than anti-Ottoman, a sentiment the Sublime Porte seems to have approved of.

Rather than co-ordinate his activities with Ypsilantis, as was the plan, Vladimirescu decided that he wanted to seize control of Wallachia for himself, resolving to march upon its capital, Bucharest. To repeated requests by the Philiki Etairia to desist, he responded that his conception of the motherland was fundamentally different: “the people, and not the “robber class.”

As he progressed through the country, Vladimirescu began to persecute functionaries of the Phanariote regime. Interestingly enough, at this stage, he had many Greeks under his command, including a contingent of Greek volunteers from Germany. Arriving in Bucharest, he sent its Phanariot ruler, Scarlatos Callimachis an ultimatum, calling for, among other things, the removal of Phanariotes, and a specified racial quota in assigning offices and titles.

Ostensibly to unite with Vladimirescu, but more likely in the face of local hostility, Ypsilantis’ Sacred Band crossed from Moldavia into Wallachia. Vladimirescu sent him letters asking him to withdraw, but these reached Ypsilantis when he was already in the city of Ploiești.

While camped there, the Sacred Band staged raids on civilians and engaged in multiple confiscations of property. This enraged the local population, something that Vladimirescu was quick to exploit, writing to Ypsilantis: “[I act] on the basis of the right given to me by my own sword.”

On 21 March 1821, Vladi-mirescu entered Bucharest and immediately fighting broke out between his forces and those loyal to the Philiki Etairia. The Arvanite captain Savvas Phocianos occupied the Metropolitan Cathedral and shot at Vladimirescu’s forces, until he was compelled to accept Vladimirescu’s executive and judicial authority over Wallachia. Soon after, Ypsilantis and the Sacred Band attempted to enter Bucharest. Vladimirescu denied them entry and when Ypsilantis and his staff were allowed to visit the city, they found themselves ridiculed by anti-Greek locals, who called theirs an army of “pie-makers.”

Observing that the Greek army was small and ill prepared, Vladimirescu carved out an agreement to share Wallachia with Ypsilantis, he retaining the lion’s share of the country, assigning the Muntenian stretch of the Southern Carpathians to the Greeks and their allies. In the meantime, Vladimirescu emphasised the brutality of the Greeks to his followers. As Cioranu, wrote: “just about most foreigners who were under Tudor’s banners” abandoned their posts in Oltenia and joined the Sacred Band. In the process, they “looted churches, houses, villages, boyars, merchants and everything they could lay hands on, leaving Christians naked… and raping wives and girls in front of their husbands and fathers.” Attacks on the Greek troops were made, ostensibly in order to prevent atrocities of this nature.

On 27 March, the remainder of the Greek forces in Moldavia were attacked by a pro-Ottoman, Austrian backed force led by Gavril Istrati. Vladimirescu, applauded its actions, writing to his own cabinet about the possibility of a common movement for justice. On 17 April, Vladimirescu inspired his boyars to draft an anti-Philiki Etairia proclamation, accusing Ypsilanti of being a dishonoured guest in a “country that had received him with open arms.”

In Muntenia, which was now controlled by Ypsilantis, Vladimirescu fomented revolt among the local population against the Greeks. He also appealed to the Sultan for assistance, through an Ottoman subject, Nuri Ağa, circulating allegations that Ypsilantis and Callimachi were both conspirators, hinting that the Sultan could only ensure Wallachia’s loyalty by removing the Phanariotes altogether.

The Sultan was not convinced. A large Ottoman army entered Wallachia and Vladimirescu turned tail and fled. Numerous clashes between the Greek and Vladimirescu armies ensued, as Ypsilantis’ loyalists demanded that Vladimirescu at least defend Bucharest. Vladimirescu, on the other hand, provoked the Sacred Band, by dressing his men as Ottoman soldiers and staging fake attacks. As his situation grew more difficult, Vladimirescu became more unhinged. Fighter Dimitrie Macedonski, claimed to have stumbled upon proof that he had embezzled 1 million thaler, and demanded a trial. On 21 May, Ypsilantis agents marched into his camp and seized him. The Filiki Etaireia loyalists displayed his secret correspondence with the Sultan, causing the collapse of the Vladimirescu forces. The man himself was taken to the Sacred Band headquarters at Târgoviște, where he was tortured, shot, cut into pieces, and disposed of.

As a result of the internecine strife, resistance against the Ottomans was doomed. Ypsilantis’ was routed at Drăgășani; the independent Wallachian fighters were massacred while resisting in northern Oltenia. Filiki Etaireia remnants, under Pharmakis and Olympios, held out at Secu Monastery in Moldavia. Olympios rdetonated himself during the siege, while Pharmakis was taken prisoner and decapitated. Savvas Phocianos was lured into Bucharest by the Ottomans with his men and they were all massacred. Such was the severity of the reprisal, that Ioan Dobrescu, the last Wallachian chronicler, reports that “even the mountains stank” from the corpses.

A national hero in Romania today, Vladimirescu presided of a revolution in concert with, but ultimately opposed to that of the Greek Revolution, simply on the basis of competing national narratives. While Marxist historians have attempted to emphasis the class struggle aspect of Vladimirescu’s movement, Karl Marx himself considered the 1821 Wallachian revolt a nationalist struggle. Ultimately, while the kingdom of Greece was established within a decade, historians such as Potra view the Wallachian revolt as one of many steps towards the establishment of a Romanian state: “this first revolution, which opened the way for a line of struggles […] for the independence and freedom of the Romanian nation, violently shook up the feudal order, contributing to the demise of the Phanariote regime.”