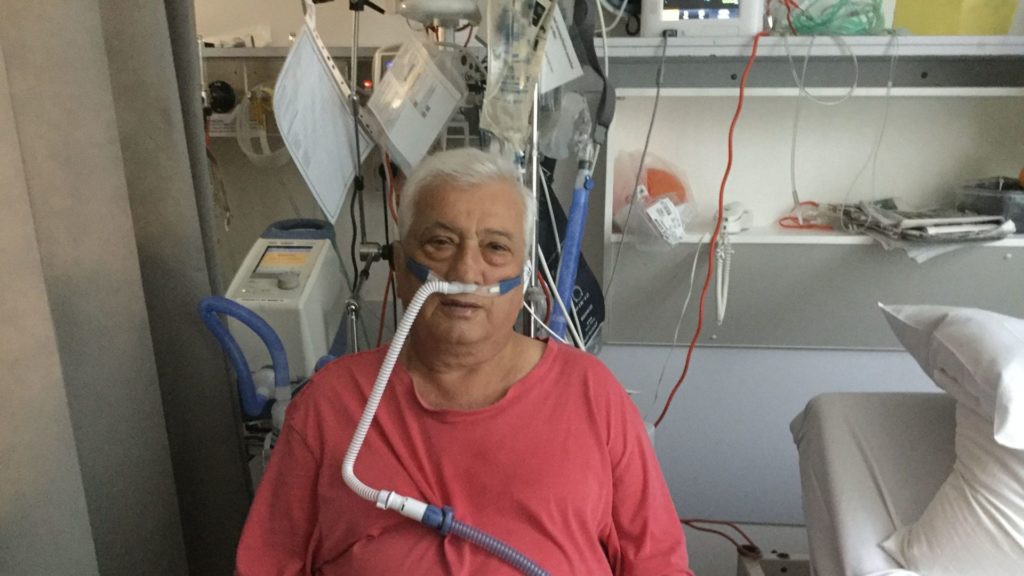 Just before Christmas, Mr Yiannopoulos was hospitalised following a hypoxemia episode, with doctors thinking he wouldn’t make it

Idiopathic Pulmonary Fibrosis (IPF) is a cruel disease. A rare lung condition difficult to diagnose in which the air sacs thicken and become scarred over time for reasons yet to be found. While some patients remain stable for years, with scarring being progressive and irreversible, decline is inevitable and thus often paralleled to the most aggressive types of cancer.

In light of these facts, it is remarkable that patient Kon Yiannopoulos does not evoke pity when he talks about the “invisible enemy”, which is what he calls the disease. What comes to mind is pure admiration of both his courage but also his decision to donate his lungs for research purposes in order to help others going through the same struggle.
From the very start of our discussion, Yiannopoulos clarifies the motive behind sharing his story.

“I’m not after help or pity, I’m not asking for anything, I just want to convey the message to the people that there is someone in the community tackling this disease[…]

“Many people, among them Greek Australians, might have the disease without even being aware, it remains unknown how it is caused, there is no cure and the public is mostly uninformed about it, as I was too,” Yiannopoulos tells Neos Kosmos.

Indeed, despite the gravity of the disease, most people do not know of IPF. Meanwhile, owing to its rare occurrence – affecting approximately 5 million persons worldwide – and the nature of symptoms that are chronic and commonly manifest in other conditions, the diagnosis can be delayed with patients often given inappropriate treatments.

While there are certain risk factors such as smoking, occupational exposure to chemicals, viruses or even genetics the reality is that scientists are still working to understand the disease and identify its causes.

Amongst the common symptoms is a chronic dry hacking cough and as for many others, in Yiannopoulos’ case its cause went unnoticed by health professionals he had sought advice from over the years, and was even prescribed unnecessary and unhelpful medication until he was finally diagnosed.

While seeing his health gradually deteriorate, it was only recently that he was confronted with a rapid decline of his blood oxygen levels. He remembers vividly the day of an acute hypoxemia episode before Christmas.

“I was sitting in front of my computer[…] and as I stood up to go to the bathroom I felt like a car with flat tyre. My oxygen levels dropped from 98 which is considered the normal to below 60 and I started shaking like a fish out of water.”

In the weeks he was hospitalised after the incident, the doctors feared he wouldn’t recover, his wife Litsa recounts.

But he made it and has since been home with his ‘companions’ a wheelchair and a portable oxygen tank.

“I live depending on this machine 24/7. Every day that goes by is harder with the disease becoming worse, it just doesn’t stop like a fire impossible to put out, ” he says, adding that he has to “stay strong”.

Yiannopoulos is on medication that help slow the disease progression but doctors have warned him not to get his hopes up and the prospect of a successful lung transplantation if deemed eligible is not optimistic either.

Remarkably, what he hasn’t lost is his sense of humour.

“I could give them [the doctors] my two damaged lungs in exchange for one working properly,” he says laughing.

By Yiannopoulos’ side are his four kids, fourteen grandchildren and of course his significant other, Litsa who explains: “That’s what you do for loved ones, you’re there for the bad times as well.”

Asked about the worst case scenario, Yiannopoulos’ attitude is rather stoic.

“What is there to be afraid of? We will all ‘leave’ at some point”.

Instead of fear for the future, he invests his energy on thinking of ways to contribute to the battle against the disease.

His medical records can are already be accessed by researchers through the Australian Interstitial Lung Disease Register, while he is in the process of arranging for his lungs to be at the disposal of scientists and healthcare professionals for research purposes.

“This is the best I can do, help scientists[…] I challenge them to keep working on a cure, it’s like saying to the scientific community ‘I will donate my two lungs, you can now go ahead, prepare your scalpels and tear them in pieces to try and find the cause of the disease and help others…”