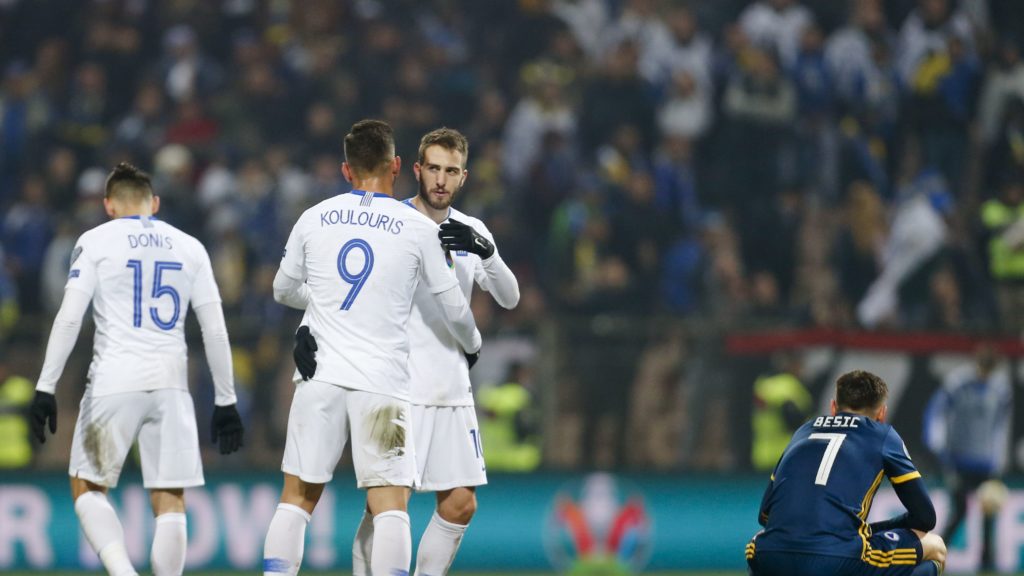 Angelos Anastasiadis is off to a good start on the bench of the Greek national team.

The “galanolefki” began their efforts to reach the final round of the EURO 2020 with a comfortable 0-2 win against Liechtenstein on Saturday and an even more impressive 2-2 draw in Bosnia on Wednesday night.

These results have put Greece in the driver’s seat when it comes to the second place of the group, as their main opponents are the Bosnians and this draw gives them a slight advantage.

However, no one could have imagined that the game would’ve progressed in the way that it did after the opening fifteen minutes, as the Balkan team took the lead with Edin Visca just on the tenth minute mark, after the Greek defence wasn’t properly able to clear a corner kick from the home side.

And as if that wasn’t enough, the Bosnians added a second five minutes later when Juventus midfielder Miralem Pjanic blasted a free kick in the back of Odysseas Vlachodimos’ net as the Benfica goalkeeper was left defenceless, with only Carlos Zeca going up for the wall.

After the initial shock however, Greece seemed to gain more ground on the pitch and began to step into the opposition territory with more consistency, yet the Bosnian threat was always a prominent one.

During half time, Anastasiadis recognised that he may have started the game a little too cautiously with four defensive midfielders (Zeca, Samaris, Mpouchalakis, Kourbelis) and replaced the uninspired Andreas Mpouchalakis for a more attacking-minded Giorgos Masouras, changing the formation to a 4-4-2 that began asking more questions of the Bosnian defence.

And with Greece creating more chances up front, it was only a matter of time until they made something of it.

That moment came on the 63rd minute, when a through ball by Andreas Samaris found the feet of Tasos Donis who immediately gave the ball to an oncoming Kostas Fortounis.

The Olympiacos midfielder was tripped inside the area by Toni Sunjic, with the referee pointing to the spot. Fortounis had no problem against Ibrahim Sehic, giving Greece a thread of hope.

And that thread became much larger a couple of minutes later, when a clumsy challenge by the arguably best Bosnian player on the pitch, Pjanic, on Zeca saw the referee send him off for an early shower.

Now the roles had reversed with Greece being the ones with all the possession and the chances and all they needed was a single goal.

Anastasiadis almost immediately made another change in order to further aid his player’s efforts, bringing off Dimitris Kourbelis for Dimitris Kolovos, as the Greeks no longer needed to hold back.

The “white-and-blue” began to wear down their opponents and it seemed it was only a matter of time until that crucial equaliser arrived.

And it was right on schedule, as it was the 85th when a patient build-up found Zeca unmarked on the right side.

He made the cross that found the head of golden substitute Kolovos, who scored his first ever goal with the national team and gave Greece what could be an important point as they continue their effort to reach the finals of the EURO 2020.

The next challenge for the “galanolefki” however, will be an even greater one, as they will need to take on Italy next June.

The Italians have already asserted themselves as the dominant force in group J, having two wins from two matches and not conceding any goals.

They defeated Finland 2-0 at the Friuli last Saturday, then moved on to annihilate Liechtenstein 6-0 at the Ennio Tardini on Wednesday.