A digital render of what the upgrade will look like at Oakleigh Cannons FC. Photo: Supplied

The Labor Government has pledged to invest $3 million to upgrade the club’s facilities at Jack Edwards Reserve, if Bill Shorten wins the upcoming election on 18 May.

If the commitment comes to fruition, the club’s change rooms for players, umpires and the public will be upgraded, as will storage facilities. The stand will also be expanded to provide additional seating for up to 1,500 spectators, a new gym, as well as a conference room for media.

“I first came to Jack Edwards Reserve six weeks ago, and tonight I see how much of a significant role this club has played in the community,” Ms O’Neil said.

“I am also thrilled that Oakleigh is one of the most developed Greek communities in Australia. This is important to me. I am not a Greek but I admire the way Greeks value family, I love their history, philosophy, dances and their fine cuisine. The Cannons are an important part of the Greek community in this area, and as a local member, seeing the hard work put into the facility upgrade plans, with the participation of 550 children, I feel great joy for the financial support being offered by the Labor party.” 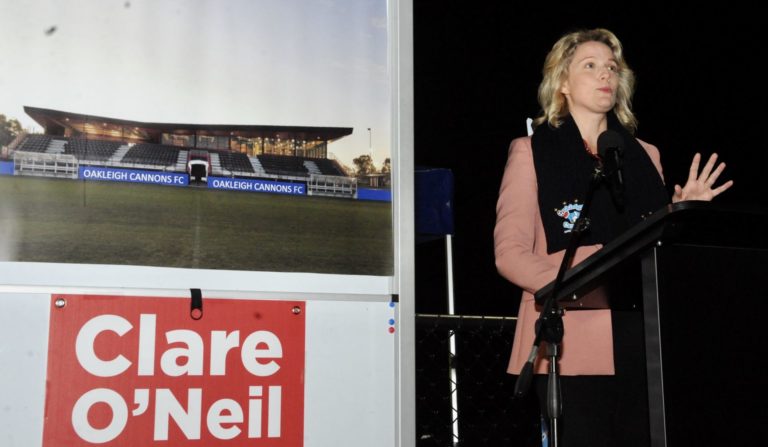 If the planned works are financed, it is estimated they will commence mid-2020, with the expectation of being completed by early 2022.

By upgrading the club facilities, it is hoped that more people will be attracted to join, and as a result additional teams will be formed. Oakleigh Cannon FC competes in the National Premier Leagues Victoria and is the only club at elite level that also houses community football at its grounds.

READ NEXT: $3 million pledge to help and support our senior Greek Australians