‘The lack of postcards’ While her peers were colouring their days in black and white (the colours of PAOK sports club), she would rather observe the world around her. At first with her eyes, silently, and then with her words… until she found herself studying economics at the University of Macedonia.

The ‘virus’ of wanting to savour and save all her moments never left her system.

Initially, whenever she would spot a blank page, be it a piece of a newspaper or her father’s packet of cigarettes, she’d end up writing on it. Then, came photography.

“My dad’s best mate had a Polaroid; it was love at first sight. From the moment I held it in my hands and shot the first photo I knew it,” she tells Neos Kosmos.

“It was, however, only after I’d tried my granddad’s Kodak and entered the dark room to develop my first roll of film, that I realised that those two art forms dwelled inside of me long before I could perceive it and waited patiently for me to discover them.”

Heidi took her first shy steps into writing back in 2010, when her first poetry collection ‘Θρόισμα Ψυχής’ (Rustling of the psyche) was published by the Ianos publishing house.

She then dove deeper into the world of analogue photography and her first personal exhibition didn’t take long to happen. It was held in her hometown of Thessaloniki and was followed by many more exhibitions and competitions locally and around Europe. Her most recent poetry and photography collection, titled ‘The lack of postcards’ which was inspired by her Instagram account, is getting published by Austin Macaulay Publishers. 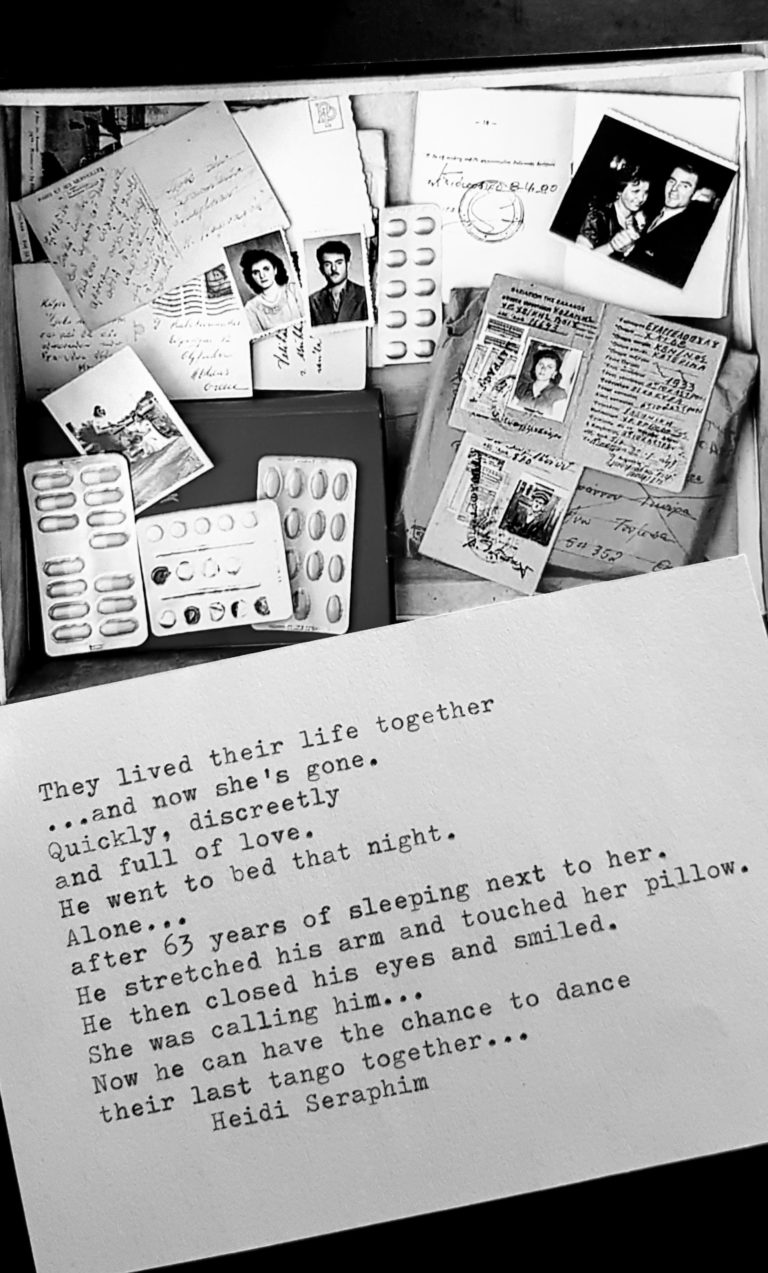 “All my life, poetry and photography were complimenting each other,” she goes on.

“I guess, you could say that I’m an economist in paper and a photographer/writer at heart. Eternally in love with words.”

Heidi always had the idea of combining her images with her poems in the back of her mind. The poem is the beginning of each story which is continued or completed with a shot. Each image is selected in a way that marries the meaning to the feelings that her work evokes.

“Originally, the idea I had in my mind was more of a travel journal… like the ones old-school wanderlusters kept,” she muses.

“After each trip, I would print my photos and write short stories to keep the imagery company. And somewhat like that, the idea was born. Last September, I grabbed the typewriter and wrote one of my poems, for the first time sharing it through Instagram.

“What followed and how the idea was received by the online community is something I could have never imagined; not even in my wildest dreams,” she adds, admitting that being in the spotlight is something she is not used to, something she doesn’t really enjoy.

“This is why I feel safe hiding behind my camera lens and behind my words.

“When I changed the vibe of the content on my Instagram page and started uploading my poems with my photos, I realised that people were seeking ways to be heard, through someone else’s words. Perhaps, that’s what some of my poems managed to convey, to give voice to those afraid of expressing themselves or those simply not knowing how. I believe that more or less we’ve all been there. A quote from a film, a verse from a song… thinking that it was written for us, that it totally conveys our reality, or even that someone out there is watching our life.” But, what does ‘lack of postcards’ mean for the artist herself?

“I adore everything retro, rusty typewriters, analogue photographs, scratched vinyl, the smell of old books, the nostalgic postcards with the half-erased words at the back,” she says, explaining that the idea for the concept first hit her when she entered an antique shop and in a corner, saw an old suitcase filled with postcards covered in dust.

“So many forgotten words, lost in time.

“Those postcards, written in every language and sent from every corner of the earth brought people together with invisible strings made of love. Words always unite us and manage to erase the kilo-metric distance that separates. Sometimes a few words are enough to keep human contact alive with the hope of reunion.”

“It may sound like a cliche, but there’s nothing that doesn’t inspire me. A person, an experience, a beautifully eerie sunset, a friend in need of support; can all be sources of inspiration. Even a stranger with whom I’d cross paths for a few seconds. But I mainly write for me. To battle my own demons.”

Indeed, Heidi began to write for herself, as a form of ‘therapy’, even though she cannot exactly pinpoint when she started writing creatively.

“I’m dyslexic, so writing for me was a catalyst. I found it hard to speak and every word would find its place whilst filling up blank pages.

“I did it for me,” she says reminiscing.

It was a school holiday when she wrote and read out loud her first poem at the age of 10. That’s when her mum bought her a typewriter for Christmas.

“Perhaps she knew deep inside, even though I myself had no idea what the future would hold. The irony is that I still use typewriters. That’s how I write my poetry.

The future did hold a surprise in store for her, a twist in the plot that took much away but also showered her with even more inspiration and hope.

“I was a bit of a wanderluster since I was a kid. I’m the one that would scream the loudest demanding an excursion in school; the one looking up at the sky wishing they were on one of those planes, heading anywhere.” And so she did. She jumped on one of those planes and found herself on the other side of the world, in Australia.

“I believe that the journey entails the meeting, the escape, the new experience. For me personally, Australia and specifically Melbourne where I live is that new horizon, that new experience. A new source of inspiration if you will. It is a gift to interact with complete strangers up until yesterday, getting familiar with new cultures, smelling the aromas of local foods, getting lost in alleyways of different cities. Life itself is a journey through and among people, smells, flavours and moments that become memories.”

When asked where she sees herself further down the line she responds that the only thing she knows with certainty is that she will keep on writing her poems, using them as captions for her images.

“I have another short novel in the works,” she reveals.

“To tell you the truth, it’s more reminiscent of a travel journal of someone in love. A wanderer’s travel journal. It’s titled ‘Traverse’, as in the nautical term.”

“We might also be publishing a ‘Lack of postcards vol. 2’. Let us be optimistic and hopeful like that!”

* For more of Heidi’s poems and photographs head to www.instagram.com/heidi_seraphim/