The tale of migration is revived on the stage of the Adelaide Cabaret Festival next month, in the mesmerising three-women play featuring Helen Yotis Patterson, Maria Mercedes and Artemis Ioannides ‘Taxithi – An Australian Odyssey’, a show which has won the hearts of the audience and received rave reviews nationwide, premieres in South Australian next month, at the Adelaide Cabaret Festival.

Helen Yotis Patterson’s play under the direction of Petra Kalive has managed to capture the migration experience like no other. The secret?

It is based on the real stories of more than 20 Greek-born women who embarked on the journey to Australia in the 1950s and 1960s.

Storytelling meets the sounds of rebetiko, Greek folk and soul music in a moving tribute to the courage and resilience of those migrants.

As the Festival’s Executive Producer Ebony Bott explains, the play was identified as a perfect fit for this year’s line-up.

“Our Artistic Director Julia Zemiro had seen ‘Taxithi’ previously and felt that the story would resonate with local audiences.
“Helen Yotis Patterson and the artistic team behind ‘Taxithi’ have created a deeply moving production which is evidenced by the response and patronage of audiences nationally,” Ms Bott tells Neos Kosmos.

After all, celebrating the country’s diversity through the tradition of musical theatre is at the core of Adelaide’s Cabaret Festival, now in its 19th year.

READ MORE: ‘The Old Greeks’, a multimedia exploration of migration

On Friday and Saturday, 7-8 June, the previously untold migrant stories will be revived through the voices of playwright Yotis Patterson and performers Artemis Ioannides and Maria Mercedes (Moutsidis) who assume the roles of the three Fates (Moirai).

The female protagonists will be joined on stage by acoustic bouzouki player Jacob Papadopoulos and pianist Andrew Patterson, who is also the play’s musical director.

In our most recent interview with cast members, Yotis Patterson provides an insider’s perspective to how the play was formed organically from the stories of women surveyed.

“When I first started conducting interviews officially, I felt it was important to have a structure to work within. I knew I wanted to find out why people had chosen to leave Greece and whether their journey had met their expectations. So I asked each interviewee those three things: ‘What made you make the Decision to leave? What was the Journey like? And what happened on your Arrival?’ As the piece developed, it became clear there was an emphasis on the number three in ‘Taxithi’. There are three women performers and three sections in the piece: The Mothers, The Brides and The Free Spirits.”

As the playwright points out, within the shared experiences the unique and the universal co-exist. 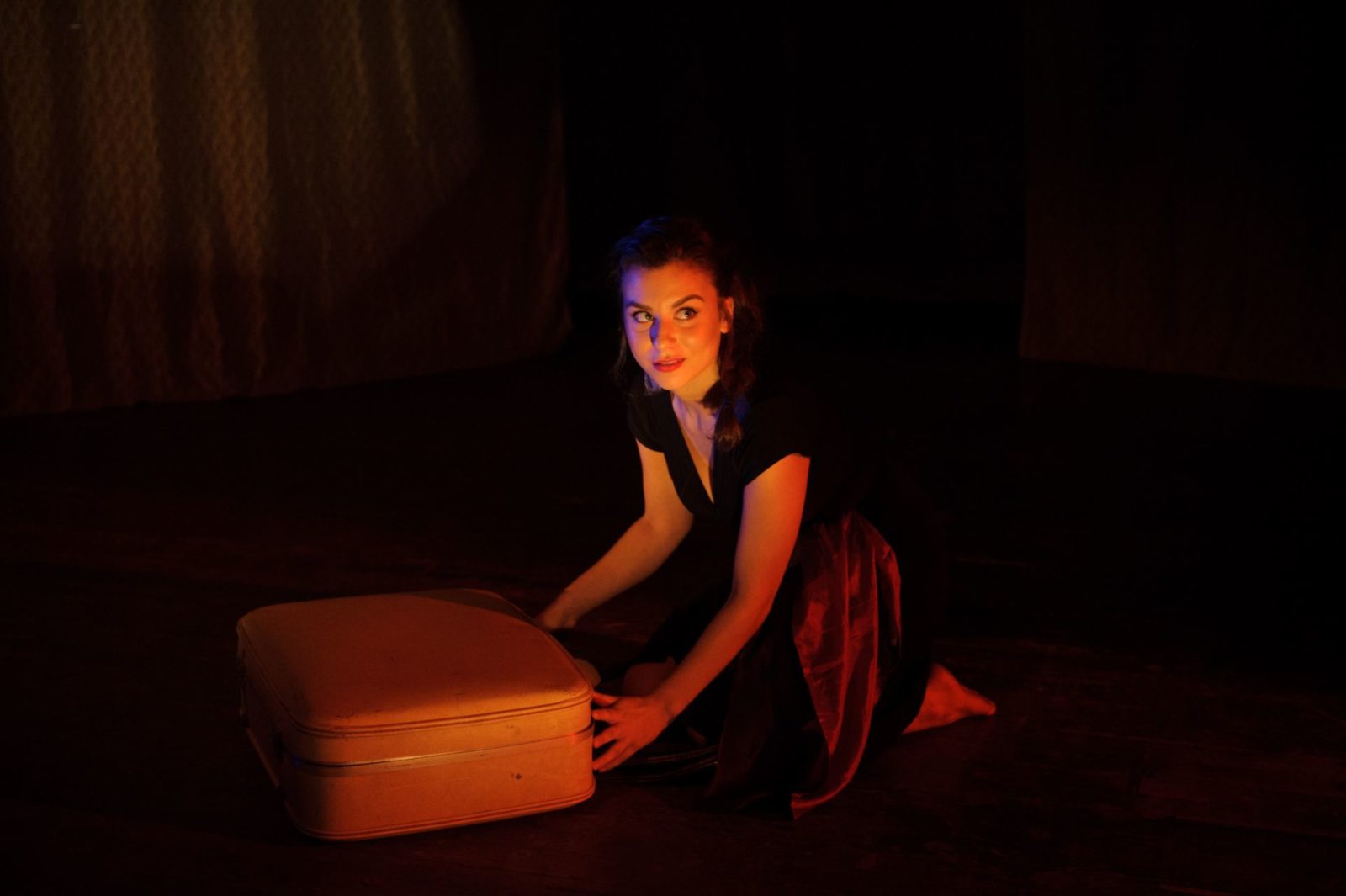 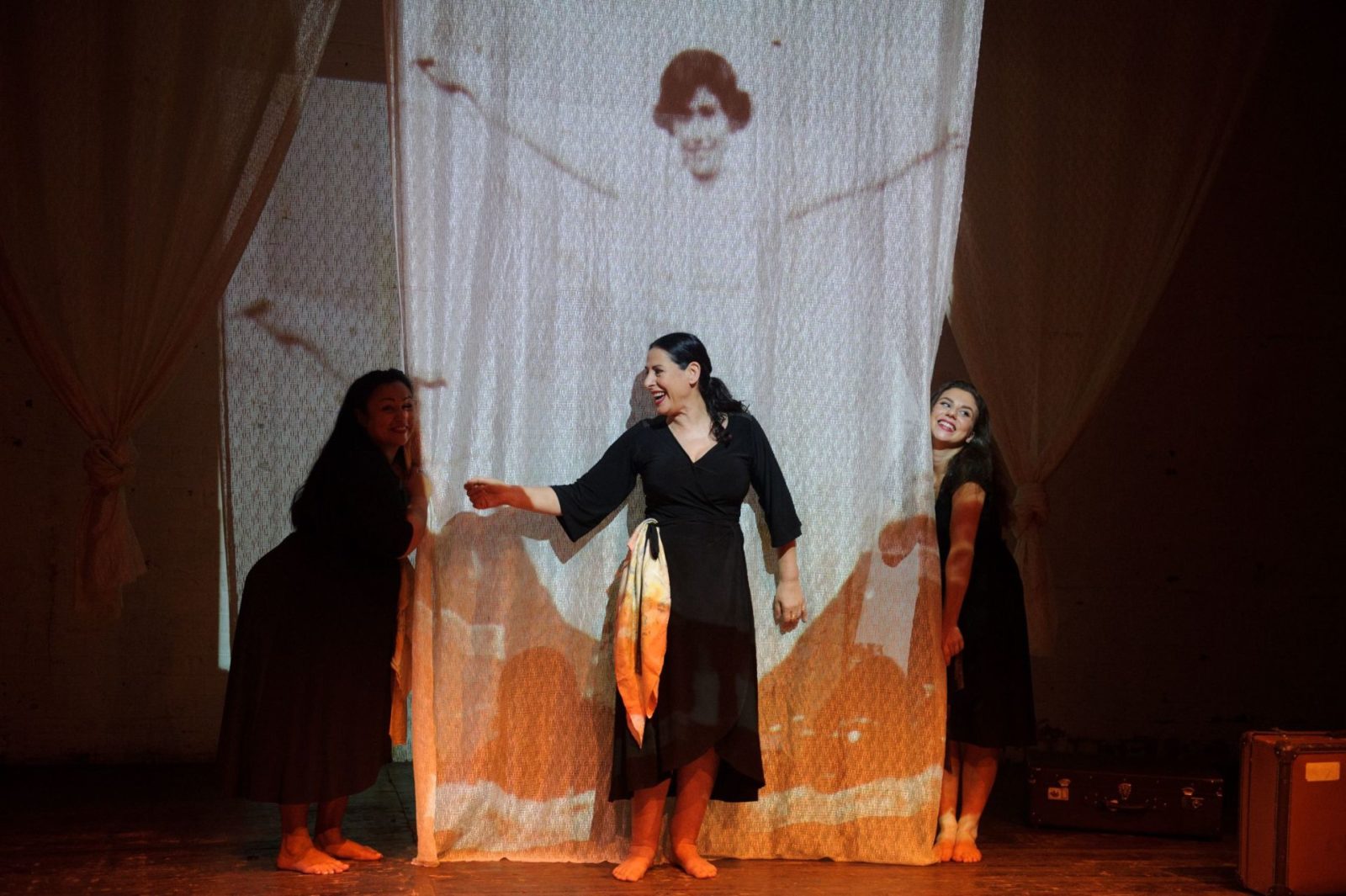 And for Artemis Ioannides, the performer representing the younger generation, the fact that everyone can connect with the play’s themes is credited for vowing audiences time and time again.

“No matter where you’re from, we all know what it’s like to feel like an outsider and to long for a place to call home […] ‘Taxithi’s’ strength is in its honesty. Our characters are all based on real women. As performers, every time we hit the stage we lend our flesh and voice to these women so that they can tell their stories through us. And so the play has a particular kind of spirit. It’s like we are acting as a channel through which the past can exist in the present. The storytelling is simple, distilled. And that kind of immediacy strikes a chord with any audience,” Ioannides explains.

“This play has given a lot of people the opportunity to grieve, to let go of the past, to talk to their loved ones about what happened to them. The audience laughs, cries, sings along with us: this is theatre of the heart,” Yotis Patterson adds.

In this sense, it comes as no big surprise that the other main performer, Maria Mercedes, fell in love with ‘Taxithi’ when she first saw it as member of the audience at a rehearsal reading before the play had gone to full production.

Immediately she was hooked by the narratives showcased: “The story is so profound and relatable that you cannot help but to be drawn in and to empathise with the situation. It doesn’t matter whether you’re Greek, Italian or whatever, the stories are the show, they are the stars of the show, we are the vehicles, all we do is just deliver those stories.”

‘Taxithi – An Australian Odyssey’ will be performed as part of the Adelaide Cabaret Festival on Friday 7 June at 6.30 pm and Saturday 8 June at 8.15 pm at the Space Theatre. For tickets head to adelaidecabaretfestival.com.au/events/taxithi