Diatribe: An Antipodean Palette of identity For a people that have been around for a considerable length of time, it is astounding that we still struggle to define ourselves. When coupled with an antipodean hypostasis that causes us to grapple with the implications of that identity, far removed from the geography that engendered it, the ensuing ontopathology is as complex as it is unique.

Although the annual Antipodean Palette Exhibition, organised by the Greek Australian Cultural League of Melbourne is just as its title describes: a range of colours, tones, themes, moods and explorations, this year’s artists seem to have, all of their own, and from different angles, coalesced around the central theme of the Greek identity. Can one define such an identity through art? Does there exist within the Greek-Australian artistic milieu a common vocabulary of symbols or images that convey a sense of that identity, interpret it, defy it and deconstruct it?

In Sky-scape, by the arts collective ‘Masonik,’ the originating topography of such an identity is inverted and subverted. A grouping of suburban Athens apartments, topped by antennas is juxtaposed against an azure sky. Yet that does not describe the heavens. Instead, occupying their place is a long grey panorama of Athens, as cement-polis. These are clouds that produce no rain. It is almost as if the people below, ensconced in their micro-communities are completely unaware of their collective identity as part of an urban whole. It is so remote as to be completely irrelevant.

In Night-scape, the viewer’s eye is directed past a narrow alley way, into the illumined night sky. A dim moon is visible overhead, yet this does not appear to be the source of the illumination. Instead, we are attracted to a street lamp, whose brightness effaces the night-sky. It is as if the natural order of things has become completely overturned.

Elements that comprise a hybrid identity in an Antipodean world are ever present in the photographic work of Helen Sartinas. It is telling that her inspiration is the Mexican ritual of setting up altars to welcome the souls of the Dead, and not the Greek Orthodox ritual of the Ψυχοσάββατο. There is a spiritual and ancestral disconnect in her picture. A votive lamp burns before a tacky Monastiraki souvenir of a scantily clothed ancient woman and a black and white photograph of ancestors who gaze back, impassively. Faded, antiquated photographs of children mounted in badges, arrest the development of youth in time, while Chinese demons and Mexican skulls look on, almost mockingly. Significantly, in the still life of the fruit bowl, pomegranates, the food of Persephone in the Underworld, which ultimately condemned her to return there, feature prominently. Is it our conception of a standardised traditional identity that we preparing to receive? What is suggested by the fact that our lamp burns before our forebears rather than a religious icon? Does this convey a coded message about the arid worship of cultural stereotypes? Do we, in the automatic replication of ritual, exclude from our consciousness, the hybridity of our daily existence? Chilean Greek Australian Rolando Garay-Matziaris explores the constituents of such a multicultural identity by deconstructing its founding myths. In homage to Russian Constructivist photomontage, and the work of Greek photographer Nelly’s his remarkable digital collages, football is coupled with theatre and mythology to compare and contrast the parallel narratives of the Greek and Greek-Australian identities. The antiquated in style, action shots of the footballers of old, have a remarkable statuesque quality, evoking ancient athletes of the Olympic Games. All of these however, surround a theatre mask, suggesting that it is the common experience of pomp, pageantry, bread and circuses that are the constituent elements of an identity, one that, in the case of the Greek Australians, is already being eroded, reforged and grafted onto other cultures, through shared ritual.

Luke Spiliopoulos’ “Still Life with Tools” is perhaps the most unassumingly profound piece of the exhibition. In his portrayal of a suitcase, topped with some boots, blue worry beads and what appears to be folded paper or a sheet, he, provides us with a complete tool chest of items that could comprise the conventional Antipodean identity. The suitcase, symbolic of the migrant, is shut, suggesting either more secrets hidden inside or a redundancy of the peripatetic condition. For how long does one keep their suitcase shut, before they cease to be called that by which the ruling class defines them: an immigrant? The boots worn out and tired looking, appear no longer are in use. Whatever journeys they undertook in the past no longer belong in the present. They have been superseded. Yet they evoke the well-known Greek phrase: “Παπούτσι από τον τόπο σου κι ας είναι μπαλωμένο.» There is thus a crisis of stasis in this painting, one that the worry-beads intensify. The pastime of the thoughtful and the indolent, they confer both introspection and inertia, for nothing is to be gained by the hypnotic click-clacking of the beads except for ennui. Indeed, the worry beads exemplify a tradition that has exhausted itself, and is uncertain of its direction. As the old song “Φτωχό Κομπολογάκι μου” goes: “ Συ μου πέρναγες την ώρα ,Πες μου τι θα γίνω τώρα;” This strange tool chest is thus an ark of identity, one at a disconcerting impasse.

A similar attempt at inversion and interpretation of the Greek identity, through an interpretation of its constituent parts, especially its hallowed iconographic heritage is effected by artist Efrossini Chaniotis. Paintings inspired by icons of Saint Nicholas, (as a Brunswick Barber) the Annunciation (I See Flowers Icon) and the Panagia and Child (I See Love icon) are imbued with the same optical effect as the icon prototype. They stare serenely at the viewer, almost accusingly. Is the highly emotive Earth icon, a chthonic Panagia, in an inversion of the Annunciation story, appears to be smelling, or adoring a prism instead of a lily, although she holds a bunch of white flowers in her other hand. What does this foretell? Is it a defragmented crystal ball of infinite possibilities ? The disembodied ochre womb behind her, which appears to be impregnated by a colourful butterfly, shines also as the sun. What creative majesty is to be unleashed upon the world through her intercession? The scene is imbued both with intense anticipation and, strangely, for Greek-Australian art, optimism. The novel manner in which Efrossini Chaniotis interprets the symbolic palette of Orthodox iconographic tradition, without falling into the trap of rendering clichés, makes this piece particularly noteworthy. 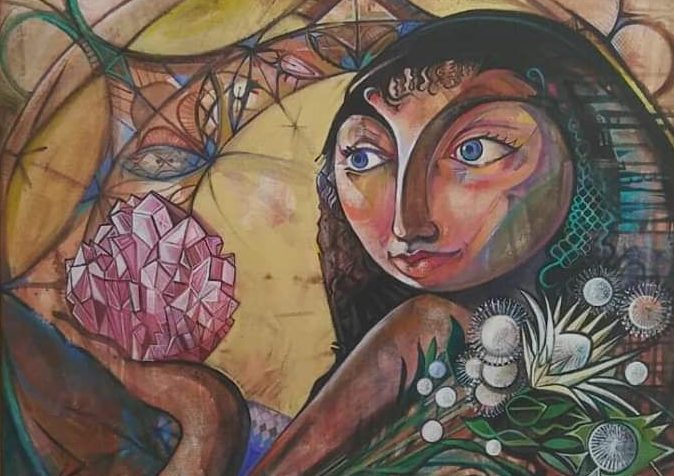 Any Labiris’ still life with apples, citrus and figs that look like female genitalia also partakes of the creative symbolism of Chaniotis. Yet these figs/genitalia, look suspended in time, arid and unproductive. They will remain on the plate, unfertilised, while the sad fruit in the bowl at some distance before them, already look as if they are in a state of decomposition. Is the artist here making a point of the lack of creativity in our community, suggesting that in our endeavour to retain and parrot tropes and perform rituals from the past, we are actually condemning such culture as we are recycling, to infertility and decay?

The high level of insight the artists display into the diasporic condition, coupled with their high level of technique render this exhibition, one of the flagship events organised throughout the year by the Greek Australian Cultural League of Melbourne, an event not to be missed, for all those who wish to engage in debate about the nature of our hypostasis, how we understand it, but most importantly, celebrate the manifold media in which we manifest it.

The Antipodean Palette exhibition at the Steps Gallery, Carlton, will close 2 June.