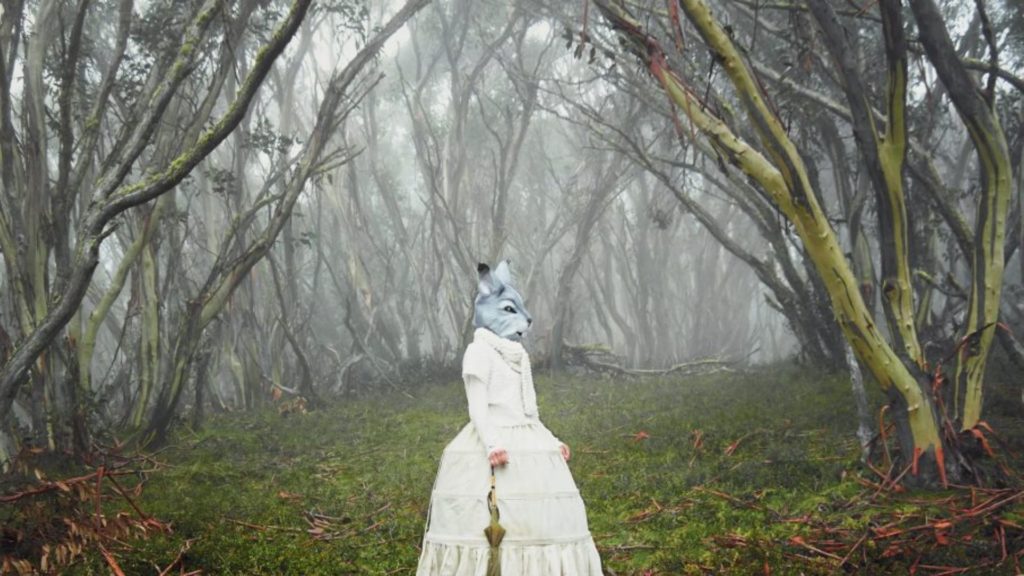 Photographer Polixeni Papapetrou died in April last year at age 57 after a five-year illness. Her friend, writer Joanna Murray-Smith writes about the artist in an introduction to the new book Polixeni Papapetrou published by Thames & Hudson. The 96 page ‘mini-monograph’ is one of a new series of monographs on Australian female artists, selected by series editor Natalie King, curator and Enterprise Professor at the Victorian College of the Arts. (The series also includes a book on the art of Del Kathryn Barton). Each monograph includes an introduction by a luminary working in another field:

Polixeni Papetrou was my kind of woman. She always epitomised to me so many of the feminine virtues – beauty, sacrifice, empathy, nurture – but always leavened by an iconoclastic wit. She was a constantly beaming lighthouse of irony, laughter and, occasionally, vulgarity. Detailed in her observations of people, not just of images, she could cite a single idiosyncratic trait that perfectly summoned a complete character. A playwright can admire this, since we are always trying to tell complex human stories quickly.

The most unusual aspect of Poli the woman was this position of observation. She managed to view things with an objective eye but was quick to forgive. There was something very moving about this, an effortless comprehension that we are all flawed and that it is the flaws that give life drama, humour and tenderness. Perhaps that is why she was such a gracious patient, enduring the humiliations of the medical world with a robust refusal to be dimmed, as if to say: This is life, this endless shift between control and lack of control, the effort to compose ourselves and our vulnerability to decomposition, tragedy and comedy, indignity and pride.

We shared an equal pleasure in discussing profound aspects of experience: the joys and mysteries of our children, the complexities of relationships, the flaws in friendships and our love–hate affairs with our own work – and much more ordinary fare. We gave equal time to existentialism and good underwear. We could move conversationally from how we are all bound to our mothers for good and ill to what Nicole Kidman wore at the Emmys. Poli travelled deeply and lightly all at once, skimmed the surface and redefined the deepest depths for me. Her mind presented an ever-evolving kaleidoscope of life: emotion, celebrity, struggle, epiphany, style, mortality. These themes were part of our conversation and the architecture of Poli’s professional storytelling.

The two most enchanting and baffling aspects of her life’s productivity are her children and her photography. No amount of declared innovation can quite camouflage that we are captivated by certain stories which begin in the ramshackle reaches of our childhood. As young creators, we may think that creative drive is always taking us into new domains. As older artists, we are forced to see that new territory is usually a reimagining of old territory. It takes an emotionally mature artist to not be threatened by their own repetition but embrace it. I always saw in Poli a fellow-traveller in how as artists we are at the mercy of the unconscious and how our recurring preoccupations are evidence of this.

The older I become, the more I realise that the obsessions and proclivities an artist returns to over and over are drawn from the well of early experience. We return to them because they hold us hostage and creative maturity is about more about surrender than resistance. We give ourselves over to the unconscious because we instinctively understand the futility.

When I look at Poli’s work, I see the flourishing that came from that acceptance. In these pages, seeing the work in ‘Sensurround’ – across youth, love, study, work, parenting and illness – allows us to see those psychological commandments that draw a thread through time and the body of a life’s work.

Her work plays with ambiguities and abstractions, moral conundrums and self-awareness, because that was the terrain of her charismatic mind.

When Poli’s own children, Olympia and Solomon, took the space that Elvis fans and impersonators, drag queens, wrestlers and bodybuilders had once filled, I was seduced. Her eye shifted to the intricacies of her own small drama, as her heart did. Children are never just children in Poli’s work. They are in a tug of war between themselves and the world around them. The carefully curated props hurl them into other contexts and characters, camouflaging their own secret intent. I have always seen myself in those images, as I’m sure others do. They summon my own conflicted sense of identity in the netherworld of pre-teen and teen – when I was part servant to the adult world, part superior to it. I think I knew that children may be at the mercy of adult whims, but they have what adults can never have again and that collapse between vulnerability and power is buried deep in Poli’s imagery.

The turn towards childhood would not surprise any artist–mother, since the experience of birth and child-raising creates its own volatile, captivating world. Watching a human come into itself turns the artist–mother into a whimsical Joseph Banks, recording the specific, wondrous and intimate details of these new discoveries as if they had never been seen before. After years of looking out at the world, the world that is closest to you becomes rife with possibility, enlarged by emotion. I see Poli’s ego in her images of her children, who reflect her power and narcissism, as they do in all mothers’ creative work – but they also add a kind of humility to her images. Despite our best intentions, our children will become themselves. The how of that is the story of the artist–mother’s evolution.

Poli brilliantly engaged and captured the terrifying savoir faire of children, as well as their beauty, the playground of identity and camouflage and embellishment and a child’s effortless celebrity (especially when they are our own). The techniques and contexts change, but each photographic chapter is part of a continuum that evolves in more and more interesting ways.

READ MORE: Polixeni and the Dreamkeepers

I witnessed how time manifested through Poli’s eye. She graciously accepted the borders around her creative playing field and played so inventively within it. Filled with sky and sand and bush and flora, her subjects play between the real world and artifice, between actual children and their transforming masks, between a painted landscape and a natural one, between childhood’s uncontrollable urges and the controlling nature of the camera which holds still – for a split second – its urgent forward momentum.

Whenever I left Poli, I drove home with a head full of interesting thoughts. Like Poli herself, her photographs ask more questions than they answer. Her work plays with ambiguities and abstractions, moral conundrums and self-awareness, because that was the terrain of her charismatic mind. Innocence collided with the sophisticated manipulations of art to provoke and excite us, just as our lively and life-enhancing conversations travelled twin roads of poetry and profanity.