New Greek PM sworn in and a new Cabinet is announced 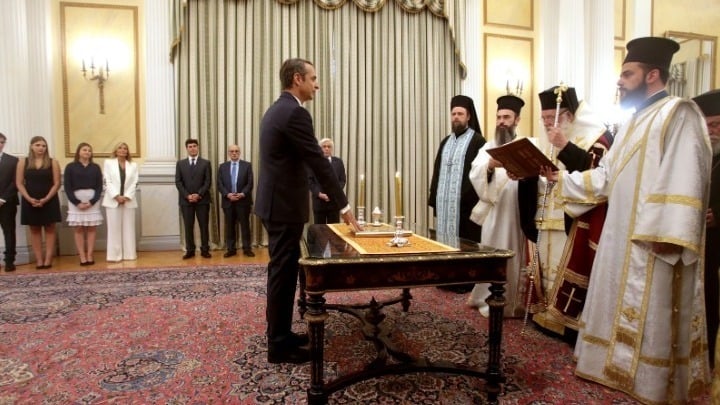 Kyriakos Mitsotakis was sworn in on Monday as the new Prime Minister of Greece. Emerging from the ceremony, he said: “The Greek people have given us a strong mandate to change Greece. We will fully respect it,” Prime Minister Kyriakos Mitsotakis said on Monday, in statements as he emerged from the ceremony where he was sworn in as the new prime minister of the country. The hard work starts today. I have complete confidence in our ability to rise to the challenge.”

Outgoing Prime Minister Alexis Tsipras waited for him at the top of the entrance to Maximos Mansion – the presidential palace – where he would be sworn in. They exchanged a brief handshake, and Mr Tsipras recalled his own swearing-in-ceremony in 2015.

On Monday evening, Government spokesman Stelios Petsas announced the new Cabinet. The following members will be sworn in at noon on Tuesday at the presidential palace.

READ MORE: New Greek PM Kyriakos Mitsotakis is a scion of one of Greece’s most influential political families