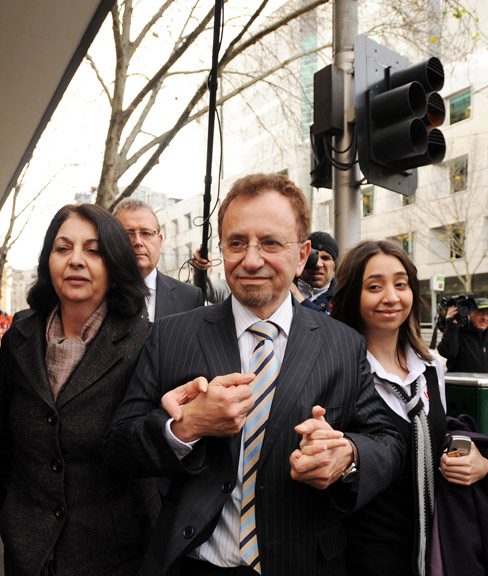 Theo Theophanous walks away triumphantly with his wife and daughter from the Melbourne Magistrates Court.

There’s no bigger test of a family than what we’ve gone through ….
– Theo Theophanous MP

Theo Theophanous will not stand trial on the charge of raping a woman in his Parliament office on a September night in 1998.
In the committal hearing that was held at the Melbourne Magistrates Court, Friday’s decision rendered by Magistrate Peter Reardon was welcomed with feelings of elation by the embattled MP and his family alike. When contacted by Neos Kosmos English Edition (NKEE), Mr Theophanous stated:
“There’s no bigger test of a family than what we’ve gone through and I’m so proud of my family and of my wife and the way in which they handled themselves… the way in which they supported me through what has been a nightmare.
I also want to say… I don’t know if the Greek community noticed…but the policeman who was prosecuting – who did it with such a bias and such zeal – at one point he was asked about an email that he sent to the woman [accusing me] and he wrote ‘this person will be a problem for us as a witness’.
First of all, it’s completely inappropriate for him to say that this person is going to be a bit of a problem and then he added the word ‘he’s a typical Greek’.
He was asked by [my lawyer] Robert Richter what he meant by saying ‘typical Greek male’. His response was “Well, you know, I’ve got lots of Greek friends and arrogant is what a typical Greek is, and they would agree with that’ he said. This is the kind of stereotyping we still have in this State, unfortunatelly. Anyway we’re very happy and the family is very happy and we’re very pleased to be past it.”
Mr Theophanous did not wish to speculate about his future plans regarding his political career as he highlighted the need to take some time during the weekend to “think things through.” News of his formal discharge were also met with satisfaction by longtime friends of Mr Theophanous.
The director of the Hellenic Museum, Vicky Giannoulatos, a former advisor of Mr Theophanous said to NKEE; “I think it’s fantastic news for Theo, his family and his friends who have supported him because I think justice has been served.”
In the lead up to the closing of the submissions by the defence and the prosecution, Mr Theophanous’ attorney slammed the conduct of the investigation by the leading police detective. Robert Richter, QC, in his closing submission on Thursday said “[…]this investigation and prosecution does a great disservice to all victims of rape and there are many, many real victims of rape.”
“Mr Smith’s investigation in my submission gives a bad name to dedicated and hard working sexual offence investigators,” Mr Richter said referring to the chief investigator in the case against the embattled MP Mr Theophanous who was accused by a woman that he raped her in his Parliament office more than 10 years ago.
His defence lawyer argued that the police had helped the alleged victim modify her testimony several times in order to mirror the evidence that became available during the investigation. “I would put to you that your investigation was a complete disgrace,” Mr Richter said to Detective Sergeant Doug Smith while questioning him on the stand. “I wouldn’t say that,” replied Sergeant Smith. During his testimony the detective claimed that friends of the alleged victim who disputed her claims were not reliable witnesses.