Priests from across Victoria together with loved ones and a number of parishioners said their last farewell to Father Nicholas Vrettakos today, Wednesday 10 July.

The service was held at Father Nicholas’ parish the Presentation of Our Lady to the Temple Church in North Balwyn, led by His Grace Bishop Ezekiel of Dervis and Bishop Iakovos of Miletoupolis.

Visibly emotional, they prayed for his soul, and in their own way expressed their love and respect for the priest, who left a strong imprint behind on the church and a legacy that will never be forgotten.

Father Nicholas passed away peacefully on Thursday 4 July, aged 63, surrounded by his loved ones, including his wife Efimia, their children and grandchildren.

Bishop Ezekiel gave a touching speech about Father Nicholas, honouring his 24-year ministry in North Balwyn and his vision for the parish community.

“Today we live a moment of eternity. With emotion and peace of mind, we lead Father Nicholas into the sky, where the angels chant and he himself takes part in the dance,” he said. 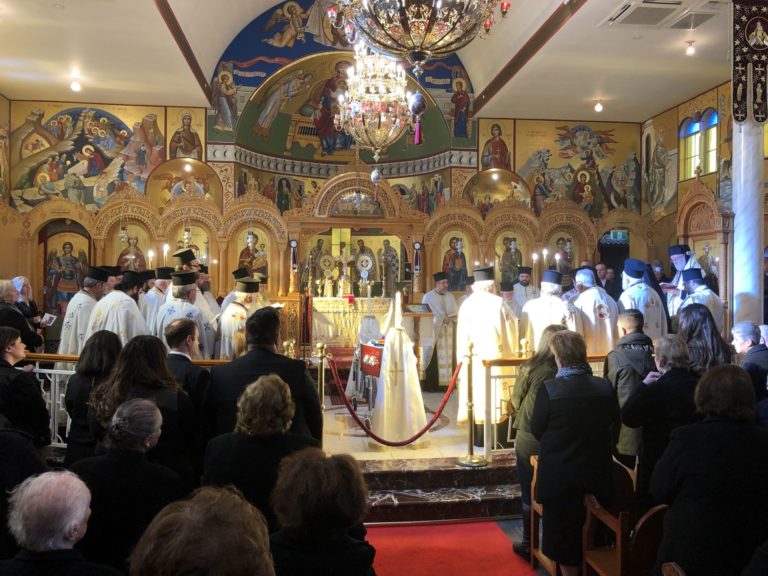 Father Nicholas was with the North Balwyn parish since it first opened its doors, in the presence of Archbishop Stylianos, since the doors opened on Sunday 21 October, 2001.

He was also a driving force behind the construction of the cemetery temple of the Resurrection of Saint Lazarus Greek Orthodox Church, built within the grounds of Bunurong Memorial Park in South Dandenong.

Bishop Ezekiel also read out the heartfelt condolences of the newly enthroned Archbishop of Australia, Makarios.

Meanwhile on Tuesday evening a memorial service (trisagion) was held at the church, attended by a number of parishioners, including a number of young people whose marriages were blessed by Father Nicholas, whose children he baptised, and whose sick parents he blessed before their passing.

“We were blessed to have Father Nicholas as our priest. His advice will accompany us every Sunday and at every celebration,” parishioner Georgia Georgiou said.

May his memory be eternal.