A young Greek Aussie in one of the greatest football academies

George Paterakis may only be 12 years old, but he’s already managed to secure himself an extension at Spanish club Villareal, gaining important experiences that will prove invaluable for his career 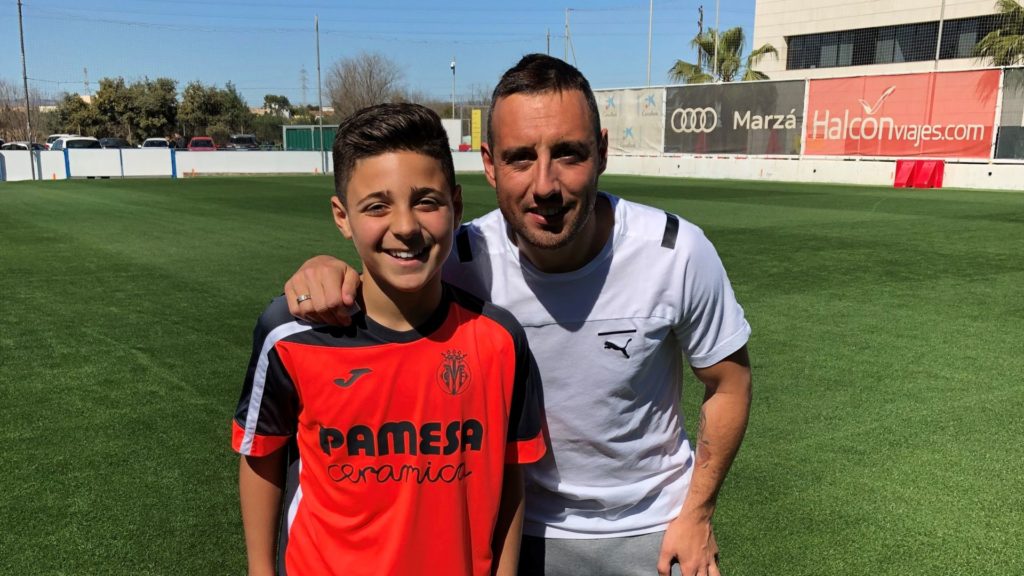 Present and future: George Paterakis pictured alongside one of the Villareal greats, Santi Cazorla.

Some of you may be familiar with the story of young George Paterakis.

He recently returned to Melbourne from his inaugural season training at the Villareal CF facilities, under the watchful eye of professional UEFA licensed coaches who carefully assessed his capabilities and determined that his stay at the club should be extended.

“The facilities there are really huge, they took up probably half the city and they were top class. We didn’t really have any long training session, it was a short class, just a lot of real-time game situations mainly.”

George has spent the majority of his life playing and training in Australia, but the moment he moved to Spain the change was instantly noticeable.

“It was much different. You can’t really compare the way soccer is here to the way they do things over there. Because, for example, my team has four coaches explaining one exercise and helping out in the team, whereas over here you might have a dad coaching the team. Even the facilities, everything. They’re professionals, even from a young age,” he said.

This was also evident when he sustained an injury, and the way the club went about treating him.

“It was an entirely different situation because over here, you’d put an ice pack on it and you’d be good. But over there, I had about four doctors around me, they all had these machines on my leg, which I had no idea what they were and it was really impressive how they were helping me get back into training,” George said.

“While the rest of the team was doing their regular exercises, I was training one-on-one with one of the coaches to help my leg get better.”

George’s experiences weren’t limited to just training at the club; he also had the chance to meet a number of the Villareal first team players, who are among the most well-known in the sport.

Among them was 20-year-old Manu Morlanes, who George believes will become popular, and Spanish international Santi Cazorla.

He had the opportunity to meet with all-star players quite often, as he was training on the pitch right next to theirs, giving George and his fellow trainees a chance to see how these professionals operate and what might be expected of them someday soon.

Aside from the Villareal academies and intense training sessions, George also had time to explore Spain, its stunning scenery of Spain, and to experience an entirely different culture.

“We had quite a bit of time to go around. We were right next to Valencia and that’s quite big. The beach was also quite next to us – it was a very nice area. I like Spain, even though it took me a while to adapt to the weather and a lot of other things are very different there, like the food and the time that they sleep and all that,” he said.

But none of these factors would be enough to deter him from accepting a full-time contract, should he ever been offered one, clear on his future goal to play in one of the big leagues.

And if he were ever to be called upon to play for either Australia or Greece, given his cultural heritage, which would he pick? Young George is level-headed in his response.

“That’s an interesting question. Maybe Australia cause I was playing here for most of my life and it’s provided me with a chance to play football. I feel like it’s best to play for Australia since I was born here,” he explains.

Whichever nation he chooses to represent though, if George continues with his impressive performance, he’ll have plenty of offers coming through that’s for sure. He’s definitely one worth keeping a close eye on..