PAOK hold on for a draw against Ajax

The result seemed fair in the encounter, as the Greek Champions had a great last 15 minutes in the first half but the Dutch giants held on to possession and missed several opportunities in the second 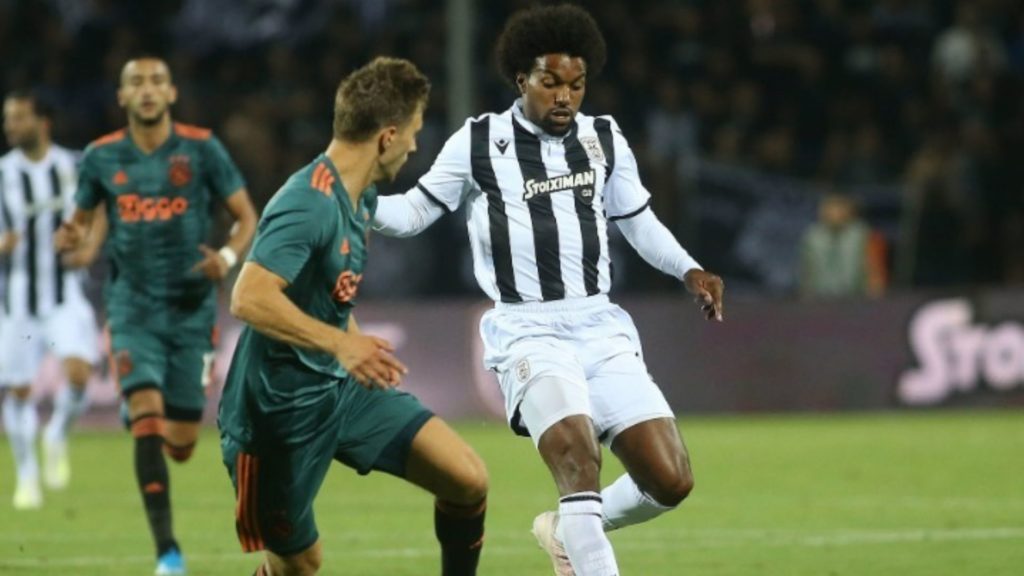 Diego Biseswar was one of the stand-out players in PAOK’s performance against Ajax. Photo: APE/MPE

PAOK had their work cut out for them in their opening game of the season, as they had to face last season’s Champions League semi-finalists Ajax.

The Toumba stadium was at full capacity as fans wanted to show their support for their team, in Abel Ferreira’s inaugural game as head coach.

However things did not start off as they would have hoped, with the Dutch Champions getting possession of the ball from the kick off and showing they were the ones to control the game.

Hakim Ziyech was an early threat for goalkeeper Alexandros Paschalakis’ goal and just after nine minutes, the Moroccan won a free kick after he was brought down by Esiti at the left edge of the area.

He took the responsibility of executing it upon himself, sending it towards Paschalakis.

Left back Dimitris Giannoulis attempted to head the ball away yet got there too late and ended up putting it past his own goalkeeper to give the visitors an early advantage.

Things didn’t change as Ajax continued to dominate the game, but Swedish forward Kasper Dolberg’s injury (he was later replaced by Klaas Jan Huntelaar) forced the Dutch to backtrack.

The home side took advantage of the wide gaps in the opposition defence and with Diego Biseswar leading the charge, carried the ball forward looking for the equaliser.

That came after a wonderful counter-attack on the 32nd minute, after the Dutch midfielder waited for Giannoulis to come up from the left wing and gave him the ball at the right moment.

The Greek defender moved the ball into the area and on the feet of Chupa Akpom who brought the scores level, sending the Toumba stadium into a frenzy.

PAOK had gained the momentum and continued to look for goals. The second came just minutes later when Leo Jaba attempted to dribble past Lautaro Martinez, with the Argentinian bringing him down and the referee awarding the free kick.

Biseswar sent it into the box, with defender Leo Matos rising above his personal marker to put the home side in front.

PAOK continued to create opportunities, but they couldn’t come up with a third and so the two sides went into the locker rooms with the home side having a slender lead.

The second half saw a more tired PAOK who gave the opposition full control of the game, as they hoped to find a chance on the counter, yet it never came.

Instead, it was the visitors who found the crucial second goal on the 57th when van der Beek’s low cross ended up at the feet of PAOK defender Fernando Varela.

He tried to send the ball away from danger, yet his sloppy clearance bounced off the feet of Huntelaar and into the back of Paschalakis’ net.

The onslaught from Ajax continued, but despite several missed opportunities from Huntelaar, Ziyech, van der Beek and even Dusan Tadic, the final whistle saw the two teams ending on level terms.

Now the team from Thessaloniki have their work cut out for them, as they will need a win next week in Amsterdam if they are to continue their journey in the Champions League.