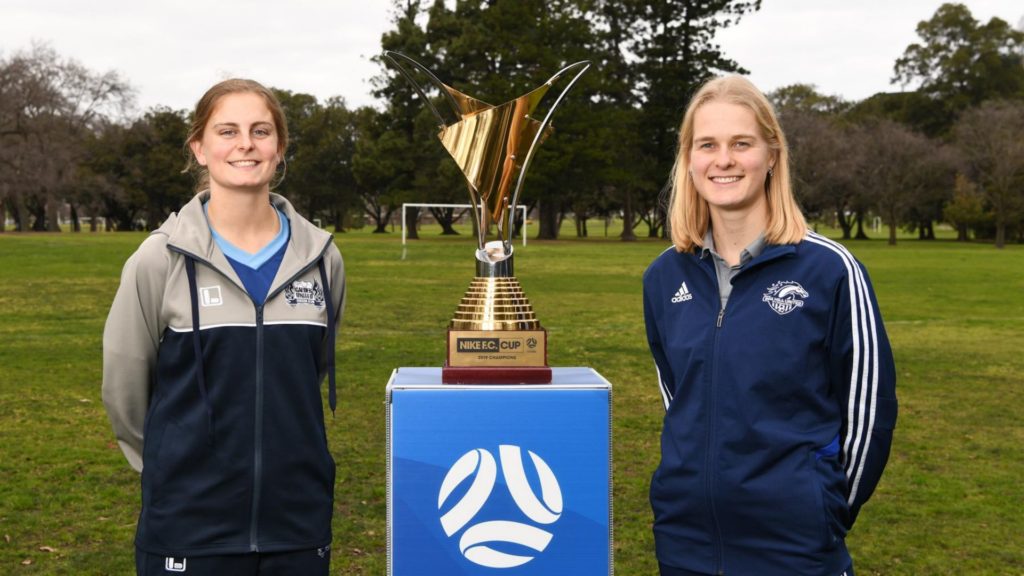 (L-R) Calder United’s Emma Roberts and Box Hill United SC’s Emma Hubbard will be hoping to get their hands on the NIKE FC CUP trophy on Sunday. Photo: Football Victoria

For Box Hill United Pythagoras, winning the Cup final would make it the second team to have won the Cup trophy more than once, having won a previous version of the Cup in the inaugural year of the competition in 2012. For Calder United, a win on Sunday would mean a historic hat trick of Cup trophy wins, with the team having won the last two versions of the cup competition.

For Box Hill, winning the trophy would also go a long way in erasing the disappointment of losing the Cup final last season 1-3 to Calder United.

Box Hill’s journey so far this season has included wins over Boroondara Eagles, Alamein FC, Eltham Redbacks and Melbourne University in last month’s semi-final. Currently sitting mid-table on the NPL Vic Women’s League table, well behind league leaders Calder United, Box Hill will go into Sunday’s final as the underdog, especially on the back of the most recent league encounter between the teams just a fortnight ago when Calder won 4-0.

Box Hill’s defence will no doubt come under pressure again when it faces a Calder attack with an embarrassment of goal scoring riches at its disposal. Their three leading scorers Catherine Zimmerman, Angela Beard and Aleksandra Sinclair have amassed almost 100 league goals between them this season, almost double Box Hill’s tally for the season.

However they aren’t invincible, as Box Hill itself proved in an earlier league encounter this season when they beat Calder 3-1 at Wembley Park, with one of the goals scored by Emma Hubbard.

Speaking to Football Victoria in the lead up to Sunday’s Cup final, Hubbard said: “Every time we play Calder it’s always a tough match, especially in a final. It’s going to be a very exciting game and a close one.

“I think Box Hill loves being the underdog. We have beaten them once this year so I can’t see any reason why we couldn’t beat them again.”

Calder United skipper Emma Roberts said that they are prepared for a battle.

“Box Hill have given us strife before but we’re eager to get out there and show them what we’re made of,” she said. “We’re going to come out fighting so they’d better be ready!”

* Be one of the first 500 through the gates on Sunday to secure your exclusive Nike Football Grand Final gift and the best seats in the house for the match.