TOP 10: Feasts of 15 August, a tribute the Dormition of Panagia (Our Lady) and a huge name day 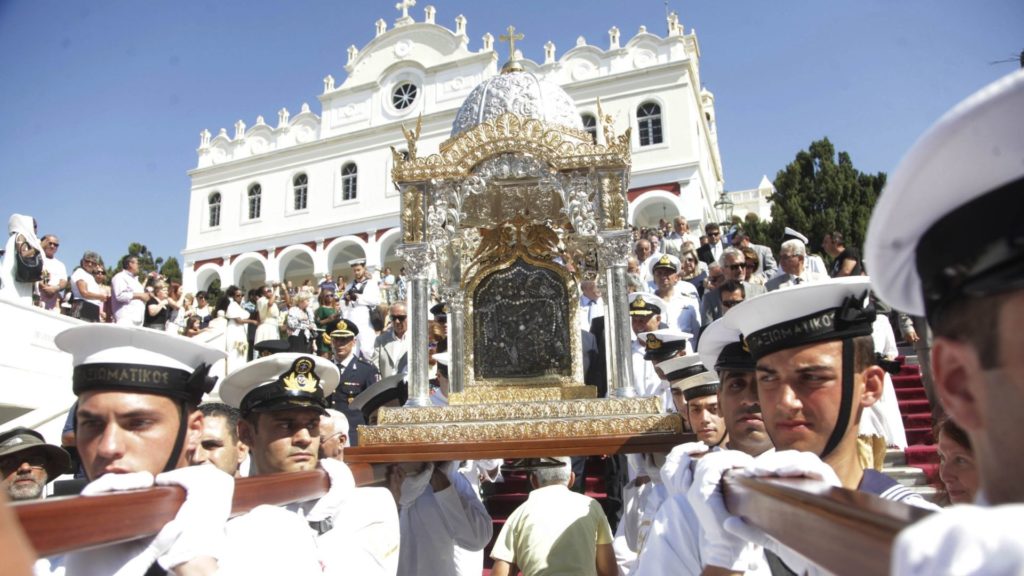 An Epitaph procession at the Church of the Blessed Virgin, Tinos.

Each year on 15 August, the biggest religious feast day of Orthodoxy takes place in Greece.

A national holiday, there are numerous traditions surrounding the Dekapentavgousto, that are dedicated to the Dormition of the Virgin Mary, the date when Christ’s mother is believed to have ascended into Heaven. Here are some of the most impressive customs around Greece (and beyond).

1. Pilgrimage to Tinos
One of the largest religious pilgrimages of Hellenism takes place on Tinos, the Cycladic island associated with the Virgin Mary. On 15 August every year, believers flock to the Church of the Blessed Virgin to venerate the miraculous image of Mary. Believers who have made a tama (a promise in exchange of a miracle) sometimes crawl all the way from the port to the church, climbing up the stairs on all fours to worship the icon. An Epitaph procession also takes place, similar to the Good Friday procession for Christ. Festivities honouring the Virgin Mary run until 23 August when the island also marks the anniversary of the sinking of the battleship Elli by the Italians.

2. Lady Fidousa on Kefalonia
Every year, a great mystery occurs at the Holy Monastery of Panagia Fidousa (Lady of the Snakes) in Markopoulo, on the Ionian island of Kefalonia. Believers head to the church to see the small snakes that miraculously appear in the belfry only on the 15 August feast day. According to tradition, the snakes bring luck to the island and the church committee collects them. When the snakes don’t appear, the parishioners brace themselves for a hard year ahead, seeing the absence of the snakes as a bad omen.

3. Panagia Soumela, Imathia
Panagia Soumela, a historic church at the slopes of Vermion, near Kastania village, was built in 1951 by refugees from Pontos in memory of the historical monastery. A miraculous icon of Our Lady, crafted by Evangelist Luke, is taken on a procession. Pontian bands from Macedonia also take pat in the celebrations.

4. Koufonisia boats to the Virgin
Unique festivities take place at the chapel in Lower Koufonisi. After the services, food is offered by the inhabitants who are transported by boats to Ano Koufonisi. Upon their return, parishioners and others party on the island until dawn with music, ouzo and fresh seafood.

5. Imbros, Turkey
The once Greek-inhabited island now owned by Turkey, had a population of 5,000 Greeks in the 1960s and was supposed to have local Greek jurisdiction according to the Treaty of Lausanne. Turkish policies forced Greek numbers to dwindle to 200, however the Greek population returns each year to celebrate the famous Panigiri from 15-22 August. Events take place at the seven villages of Imbros, and typically include a meal of meat and kourkouta (crushed wheat) served following the service as well as many other festivities.

6. Virgin Mary of Mikrokastro
The tradition of pilgrim riders dates back to the Ottoman Empire, and is symbolic of slaves that showed their bravery by displaying horse-riding skills. On the even of the feast, horsemen collect in groups at the squares of Hora, Gerania and Bunia to lure locals and their guests to the feast. On 15 August, riders gallop to the Virgin Mary Monastery at Mikrokasto, Kozani, before returning to Siatista, the square of Hora, where the celebration continues.

7. Virgin Agiasotissa on Lesbos
Starting from the city of Mytilene, pilgrims walk 25km to reach the churchyard of the Virgin Agasiotissa. After an overnight stay, they take part in festivities on 15 August that include the procession of an icon around the church, as well as music and dance at the village square.

8. Singing islanders at Magnesia, Skiathos
The Epitaph of the Virgin Mary takes place in a unique atmosphere, accompanied by choirs singing together.

READ MORE: The Annunciation of Our Lady celebrates its feast day

9. Panagia Ekatontapyliani of Paros
Ekanontapyliani is an impressive early Christian church with impressive architecture that makes it worth a visit. Believers from around Greece gather to venerate the icon of Panagia Ekatontapyliani, which is included as part of an Epitaph procession that culminates into a big party with Parian wine and other delicacies. At the port of Naoussa, dozens of boats approach the pier with lit torches, and a ‘pirate’ arrival is re-enacted followed by island dances, that include the ‘Balo’.

10. Panagia Spiliani on Nisyros
Black-clad women stay at the monastery of Panagia Spiliani, located in the castle of Knights. They clean the area and worship Virgin Mary. Two rituals take place. On the one hand, there are the priests, and on the other hand there are the women in the role of ‘priestesses’ that do 300 prostrations per day and sing to Our Lady. On the Dekapentavgousto, the priestesses hold trays of boiled wheat and pave the way for the sacred icon. Following the procession, there is drinking, singing and the dancing of the ‘Koupa’.