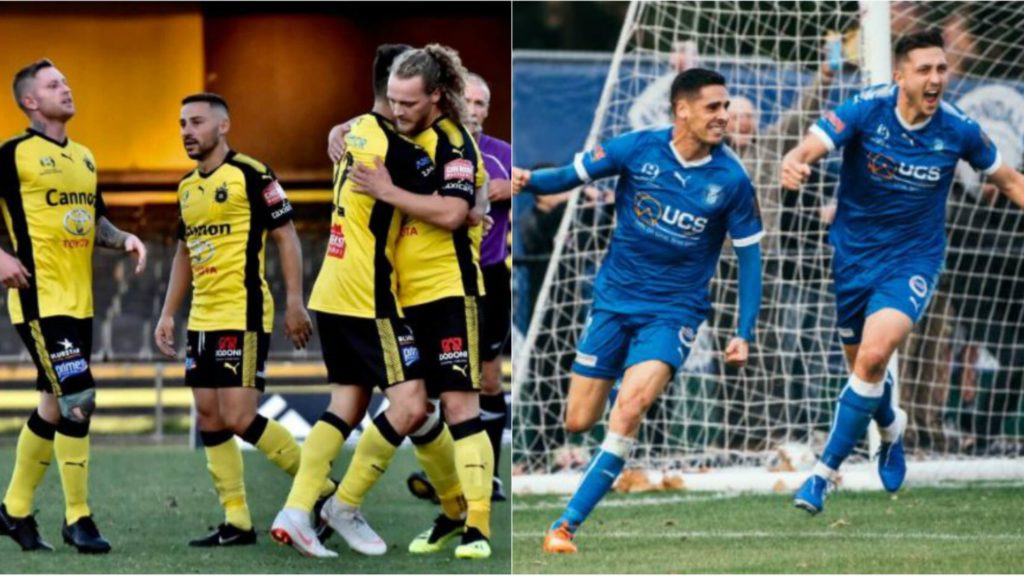 The Bergers and Avondale have built up an intense rivalry over recent seasons. Photo: NPL

Despite the fact that the Top 6 teams are already assured of finals football this season, NPL fans can expect drama and tension aplenty in this weekend’s penultimate round of the season, with something riding on almost every fixture of the round.

Topping the bill is Saturday afternoon’s heavyweight clash between league leader Avondale FC and second placed Heidelberg United at Avenger Park in Parkville. The ‘mini grand final’ between last season’s grand finalists, will go a long way in deciding this season’s Premier Plate winner. With just one point separating the teams, a win to Avondale will clinch its first ever Premier’s plate. In the event of the clash ending in a draw, Avondale will still remain in the box seat, albeit with the challenging task of needing to win its last match of the season away to Bentleigh Greens to make sure of the trophy.

If however the Bergers win on Saturday and then win the final match of the season away to South Melbourne, it will capture the Premier’s Plate trophy for an unprecedented third time in a row.

Speaking to HUFC TV after last week’s scoreless draw in the catch up match against Oakleigh Cannons, Heidleberg United coach George Katsakis said “our destiny is in our own hands at the moment. It still means we’ve got to come away with two wins in order to finish top of the league again.”

He said the weekend’s match against Avondale is now their focus.

“If we win this one, we give ourselves every opportunity. We’ve got to be mindful of Avondale – they’re a very good team, It’s the reason why they’re up there at the moment. We’ll no doubt do some work on them during the week, and talk about all the areas we need to be concerned about in terms of them getting forward. I’m sure they’ll be doing the same thing. Obviously we’ll be looking for ways to break them down and hopefully get a positive result,” Katsakis said.

Avondale’s form has been a little inconsistent going into this crucial match with just two wins from their last six starts, but with the squad returning to full fitness after a rough patch they will be a formidable opponent for the Bergers, both physically and mentally ready for the opportunity to clinch a trophy which would be a just reward for an excellent season. They have key players such as prolific striker Liam Boland, supported by speedsters in Stefan Zinni and Valentini, as well as one of the league’s most creative playmakers in Tasuku Sekiya.

Before last week’s draw against Oakleigh, the Bergers had won five of their last six matches to close the gap on Avondale. When they last met earlier in the season, they shared the points in a 1-1 draw at the village.

In attack the Bergers will be relying on their familiar quartet of Ellis, Cahill, Noon and Zahra with the addition of speedy Lucas Derrick. Alex Schiavo returning from injury provides further options from the bench.

In defence, the experienced back four of Doumbalis, Byles, Pace and Wilkins partners with mid-season signing Brendan White who has been preferred in goal to Bergers stalwart Chris Theodoridis in recent weeks.

Besides Saturday’s top of the table clash, Saturday afternoon features a Greek derby at Port Melbourne between the Sharks and a third placed Bentleigh Greens struggling to keep its place in the top four under threat from both Green Gully and Oakleigh Cannons. A loss by the Greens to the Sharks on Saturday (and wins to both the Cannons and Green Gully) could see Bentleigh lose its top four place and miss out on the chance to host an elimination final.

At Lakeside on Sunday, eighth placed South Melbourne hosts 10th placed Altona Magic in a match in which a few youngsters may get a run, given that both teams are safe from the threat of relegation and have no chance of making finals.

It’s a huge weekend for Kingston City fans, who’ll be on the edge of their seat on Saturday, keeping a close eye on the match between Green Gully and Dandenong Thunder. A win to 12th placed Thunder, which leads Kingston by a point on the table, will secure it a play-off spot and send both Kingston and Pascoe Vale down to NPL 2. However a draw, or a win to Gully, will give Kingston the chance to overtake Thunder if it can defeat Dandenong City on a Monday night match at the Grange which will close out the round.