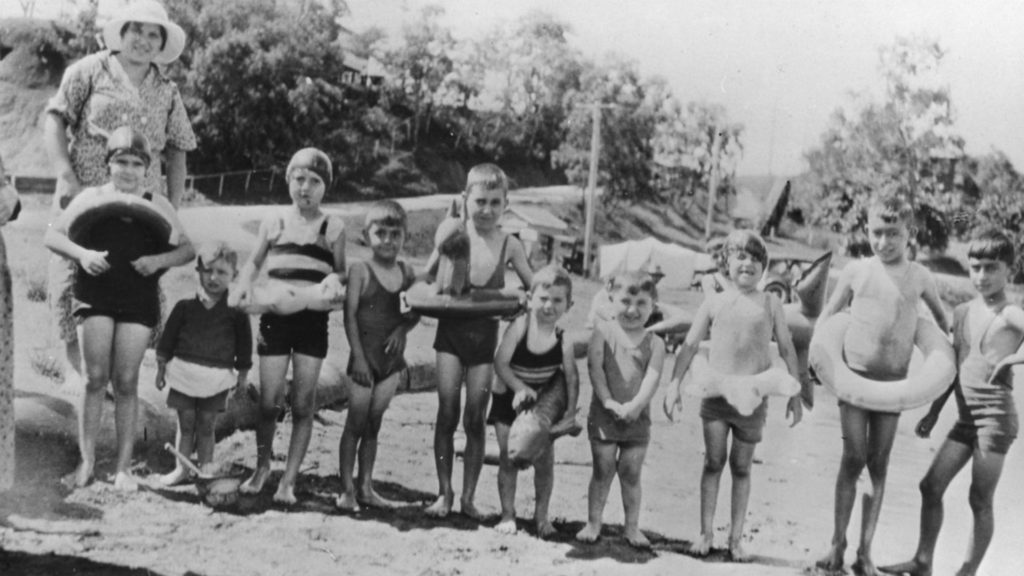 The first generation of Australian-born Greeks of Asia Minor that settled in Brisbane, taken in 1934 at Wellington Point near Brisbane. The children come from the Girdis, Lathouras, Cholakos and Caris (Caristinos) families. Photos: Supplied

A few years ago Con Drakos’ life was changed forever. Born and raised in Brisbane to parents of Asia Minor heritage, he grew up in a family of seven siblings. In adulthood that seven would become nine.

Con and his siblings were all grown up, with adult children of their own when they were rocked by the news of having two paternal half-sisters.

“It came as a shock,” Con told Neos Kosmos.

“They approached us – well there was one at first. She knew that her father was Stan Drakos who was my father. So then she contacted us and we met. Then two years later we met another half sister who tried to track us down.
“They had different mothers. Both were adopted out, and they were trying to find their roots and they wanted to know more about the father’s side, our side.”

But as their questions were raised, Con started to realise that as a family, they themselves didn’t know all that much either. And with the truth having surfaced after the death of their father – as well as Con’s mother, which he says is somewhat of a relief; as far as they know their mother was unaware her husband had fathered other children – they couldn’t ask him for answers directly.

Nobody in the family had ever thought to put together a family tree. And so Con decided to be the one to change that.

His first port of call was the Asia Minor Greek Historical Society (AMGHS).

“Luckily the AMGHS did have some trees, but they were just descendants; that was a starting point because from there I could expand on them. And from that I’ve been able to track down records and photos and stories,” he explained.

Con’s initial investigations alluded to another observation: his parents were just two of the millions of Asia Minor refugees who emigrated to various parts of the world; he could have relatives from nearly anywhere in the world. So the next step was to order a DNA test – not one, but two, first with Family Tree DNA, and then with Ancestry, in a bid to get as many matches as he could.

“Some people don’t bother to upload their results into a great big giant database called GedMatch. And if they don’t do that, I wouldn’t see their matches. So I tested twice to get as many matches as possible.

“This is where DNA testing showed it’s true worth,” Con said.

“DNA matches connected me with previously unknown relatives, not just elsewhere in Australia but in Greece and the USA. I’ve discovered second and third cousins that I’ve never met before and I’ve been in contact with them since.”

Stories from Asia Minor often reveal a lot of tragedy as a result of the ethnic cleansing and genocide of Christians that took place between 1914 and 1922. Con’s own ancestors were amongst those who suffered.

His grandmother Arete was one of nine children born to Nicholas and Maria Girdis, living in Alatsata, Asia Minor. Before the first forced expulsion in 1914, her four older brothers John, Steve, George and Mark migrated to Australia to avoid forced conscription into the Turkish army, while the rest of the family escaped to Athens. While there, her father died from pneumonia.

In 1919, Arete together with her mother and siblings Elizabeth, Eugenia and Christopher returned to Alatsata under the protection of the Greek army’s ill-fated invasion of Asia Minor.

It was just before the second forced expulsion in 1922, the Asia Minor Catastrophe, that George Roumanas travelled from the USA to Alatsata to marry Arete. Shortly after she fell pregnant.

But her husband would not survive the Catastrophe; he was killed in a Turkish attack, while the remaining family fled towards Chesme to escape.

Arete’s brother Christopher, aged 15 at the time, hid under the nun’s habit of his sister Elizabeth, but the Turkish soldiers saw his legs under the habit and killed him.

The widowed and pregnant Arete, together with her mother and sisters managed to reach Chesme and then ventured on to Athens. Meanwhile her brothers in Australia arranged passages for Eugenia and Elizabeth to travel to Brisbane, while Arete remained with her mother in Athens until she had her baby – Con’s mother Despina – and emigrated to Australia six months later.

Inspired by his search, this month Con was asked to deliver a lecture at the AMGHS to shed some light on DNA testing, family trees and ancestry research.

“The AMGHS recognise that such research uncovers family histories, and they value the importance of family histories, knowing that such stories keep the bonds of Hellenic Asia Minor heritage strong, and without that connection to the past, our identity in the future will be lost forever,” he said.

What makes it particularly pressing for people with Asia Minor heritage to try and piece their stories together, is that it can be more challenging given that many of the records of birth, death and marriages were destroyed by the Turks.

Meanwhile the older generation are ageing, many having already passed on like Con’s own parents, and for those still alive it can be painful to speak of the tragedies they experienced in Asia Minor. This is often why so many descendants have gaps in their familial stories.

“So this makes it even more challenging … you’ve got to depend on word of mouth.
“The Turks deny all the killings that happened, and this is a major thing that has been swept under the carpet, that the atrocities never happened. But the truth is they did happen.”

Con can’t stress enough what a valuable resource the AMGHS is, as keepers of these stories.

In a bid to commemorate, celebrate and educate the community about the contribution of Greeks from Asia Minor, Con’s cousin Despina Drakos compiled ‘The 90 year commemoration of the 1922 catastrophe of Smyrna, Asia Minor’ in 2012, which still serves as a valuable resource.

Many of these stories are not yet accessible online, but Con encourages people to contact the Society for information, and to get access directly.

Con’s family tree has come a long way, and it just keeps growing. He has since started his own group online, where all his known relatives connect regularly, sharing photos and stories, and assist in finding new relations, to help populate their growing family tree.

What was initially a shocking experience, has turned into an enjoyable project of sorts; and one that has taught him a lot more about himself. He encourages others from Asia Minor to not be deterred in their own search.

Tips on starting your own genealogy journey: