Greek Australian volunteer Jane Pallot in Sierra Leone: ‘We need to look beyond our own borders’ 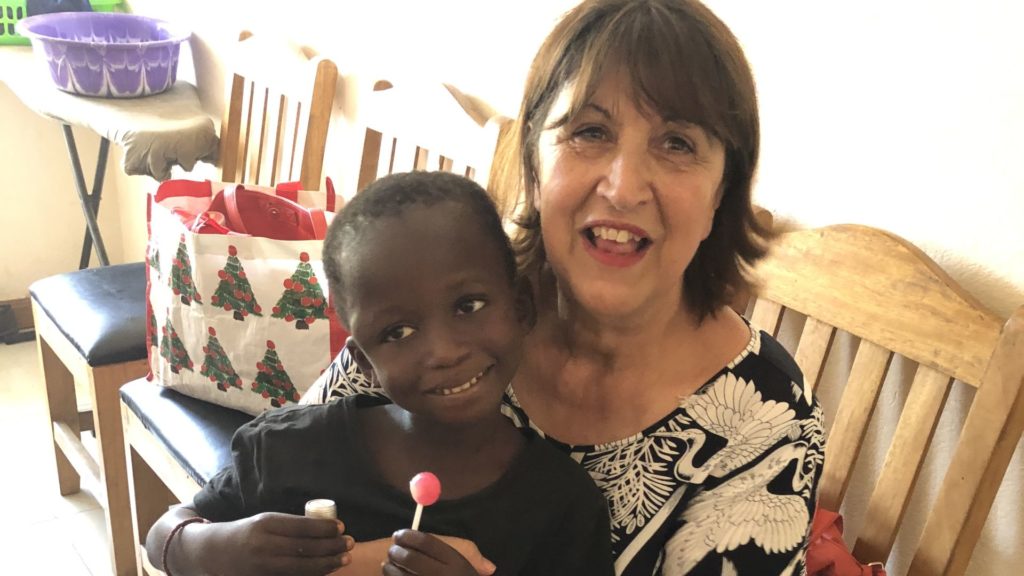 Jane Pallot with one of the orphans. Photos: Supplied

Since returning to Melbourne from Africa, Jane Pallot is sure of one thing: the majority of middle class Australians have no idea what real poverty is.

“Until you go there and smell and see the poverty, we have no idea here,” she says. “When you have a mother who has no money, she has two dollars to feed her child for the whole week, and you think ‘how’s she going to do this?’ That’s when reality hits, and you think ‘I’ve got my comfortable house and I can go to supermarket’ and as Fr Themi says there’s about six or seven choices of yogurt!”

But for Jane, the positives she witnessed far outweigh the negatives; amongst the poverty is hope.

Since meeting Fr Themis at her local church, Jane has been fundraising for Africa for 14 years.

It had been six years between visits for Jane, who last travelled to Sierra Leone with her husband David to set up a medical clinic in Waterloo. This year she made the trip together with fellow Australians Jason Dollas, a motor mechanic and general handy man, and Danielle Crisp, a nurse, and says she was struck by how far the mission has come in a relatively short period.

“It was a real wow factor! The country had 12 years of war, so there hasn’t been any education for 12 years; it’s just starting to get its feet on the ground now. It’s very hard to get good trades people. So to have all that building: the teacher’s college, three churches, a primary school, a full on clinic, plus another clinic within the compound and this mission house. How was this achieved?
“Also everyone is trying to get themselves out of poverty – that’s the difference that I saw this time; everyone was working hard at it. I was quite excited for them!”

What makes the mission unique is that everyone is a volunteer, run by Fr Themis and his sister Mary, an educator, with the assistance of Louis Toumbas, the international director of Paradise 4 Kids. By keeping their overheads low, Jane assures that every single dollar raised goes directly to helping those in need.

The mission’s works are spread between two towns. The mission house, church and teacher’s college are all located in Freetown, where an administration building and kindergarten are currently under construction. While the mission’s primary school, which educates and feeds 600 students is located in Waterloo, as is the orphanage, which opened in 2018.

“We have 16 Ebola orphans ranging from three to 14, and it’s an orphanage that’s really a house. They have two matrons and a cleaning lady that live there that look after the children – they’re like mother figures to them,” says Jane. In front of the clinic, nurse Stella and Dr Sergio, Jane Pallot, and volunteers Jason Dollas and Danielle Crisp with the Ebola orphans. Aside from housing, food and education, the mission has played a leading role in providing medical care. Volunteer doctors and nurses played a key role when the Ebola virus broke out in 2014, and have continued to cater not only to the mission but the wider community of Waterloo.

“Australia has sent product, so it’s a well-equipped medical centre. Anyone can walk in off the street to seek medical attention and the clinic provides that. And I saw that; one day when I was there we had a construction worker who injured his hand come in and the doctor stitched him up. He wouldn’t have got that care at the general hospital. It was just fantastic,” says Jane.

It is seeing this difference that the mission has made in the various facets of people’s lives that continues to spur Jane on.

READ MORE: Fundraising for the orphans in Sierra Leone School children visit the clinic and are tested for Malaria, and if positive are commenced on medication. Upon returning back home to Melbourne, she admits it took some time to adjust; something as simple as being able to turn the shower on, and have clean running water was a shock to the system.

“For us going over there, you have to adjust. But even though it’s difficult, it’s still a wonderful experience, and we grow from it. I see God there everywhere working and that brought tears to my eyes,” she says. “That’s what I truly saw everyday; love for his people.”

Fr Themis arrived this week in Australia, and will take part in a series of fundraising efforts.

The mission’s future aim is to become self-sustaining. By supporting children through high school and onto university with their tuition fees and living expenses, with the help of sponsors, the idea is that they will get an education that will give them the chance to acquire skills they can bring back to the mission, to help their own people.

It is clear that the mission and volunteering hold a special place in Jane’s life, and is something she encourages people to try for themselves.

“Once you meet the children and the workers there, you become friends and then you come back and you can’t forget those faces, and that’s why I can’t turn my back on them,” she says.

“It makes you see things differently, that life is not just about us and we need to look beyond our own borders. There’s a bigger world out there and there’s still so much work to be done.”

* The mission would like to encourage corporate sponsorship. For further information on how to help, contact Jane Pallot on 0404 040 578.