New doco highlights Lesvos’ response to migration crisis: a lesson for the world in philoxenia

Greek Australian director Anne Tsoulis has her heart set on completing ‘Philoxenia’, a feature documentary delving into the local response – the humanity and generosity of ordinary people – to Europe’s refugee crisis of 2015 as a means to tackle rising xenophobia. And she needs your help 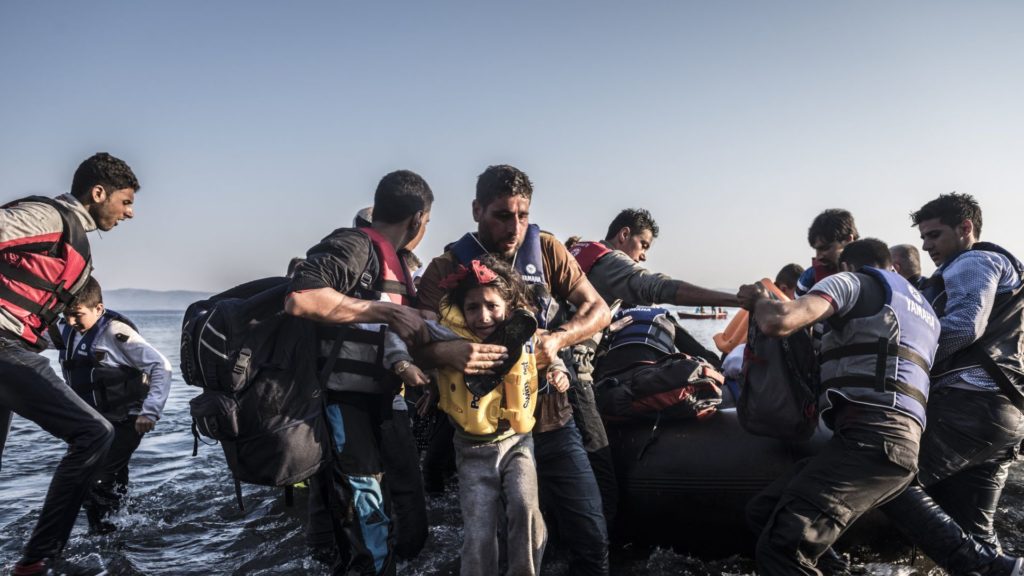 The Greeks have given the world many things, from democracy and philosophy to the arts, and even delicious kitchen staples like olive oil and feta cheese. But director Anne Tsoulis is convinced the Greeks have something else to offer, and she is set on spreading the message through her latest feature documentary.

Produced by Alison Wotherspoon, Philoxenia is based on Europe’s refugee crisis, which saw some 400,000 refugees arrive on Lesvos’ shores – an island with a population of 86,000 people – in 2015 during the height of the Syrian Civil War, within a five-month period. The responsibility of rescuing these people – some alive, others dead – was left up to the locals.

While Tsoulis was following the unfolding crisis from her home in Adelaide through the media, it wasn’t until she visited Lesvos herself in 2017 that she really started to understand the gravity of what the islanders had endured.

“Every so often you hear of a story that is so difficult to believe is true,” Tsoulis told Neos Kosmos. “When 400,000 refugees came onto their shores, it was left to a small population to deal with it, to go and rescue them, feed them, clothe them, look after their medical needs – it really blew my mind. The bravery and conviction to do whatever it took to rescue these refugees is unbelievable.”

“We need to get back our sense of humanity and I think what happened on Lesvos is a story that exemplifies the true Greek spirit that comes from a very rich history of dispossession.”

One particular encounter she had with a resident of Skala Sykamenias, a small village of 100 people, stands out in her mind. A member of the extreme right-wing Golden Dawn party, when asked what he thought of these people seeking asylum on the shores of his village, Tsoulis was surprised by his response.

“He looked at me incredulously and said: ‘These people are fleeing war; it’s not their fault. When you drag a person out of the sea, half dead, you don’t ask where they come from or what their politics are, you do whatever you can to save them. You give them the food on your table and you give them the shirt from your back’,” she recalls.

“It was very powerful coming from someone that belongs to a fascist party like Golden Dawn. And I thought it was a story the world needs to hear and understand, how embedded the whole concept of philoxenia is in the Greek psyche.”

Other locals she met shared the sentiment, and even empathised, after all many have ancestors with roots in Asia Minor. Forced to make the perilous journey across the Mytilene Strait from Turkey as refugees themselves, the similarities are not lost on them, and is something the director wishes to highlight.

“Greeks have been disposed forever themselves, so they understand,” she says. And they haven’t forgotten the help many Greeks received from the Syrians during that difficult time.

“They tell you they have a debt to Syria who rescued so many thousands of Greeks and took them in when the Turks sent them on the death marches during the Great Catastrophe. Those who survived and reached Syria, the Syrians just grabbed them and looked after them; helped them get onto boats to Greece, or a lot of them stayed in Syria. Now the Syrians need help. So it’s a really nice symbiotic relationship in a way. But it came at an incredible cost to the locals.”

Philoxenia is a documentary that will look at the plight of the refugees, but with a focus on the locals, their response and the impact it has had, and continues to have, on their lives today.

“I want to tell their story, and I think at a time when xenophobia is on the rise, the world needs to learn the word philoxenia and have it spoken in any discourse in regard to refugees and migrants,” explains Tsoulis. “We need to get back our sense of humanity and I think what happened on Lesvos is a story that exemplifies the true Greek spirit that comes from a very rich history of dispossession.”

It is four years on since the refugee crisis started to unfold, but the director’s timing couldn’t be better. Just last week, Lesvos had an influx of over 600 refugees in one day – the largest number of arrivals since the height of the crisis.

Tsoulis hopes to be back on the island by October to begin shooting and pre-production. She plans on speaking to those who were at the forefront of the crisis, piecing together what happened over the five-month period from the initial influx to when all the NGOs, media and government stepped in and took over, to the reality of today.

To help realise the film, Tsoulis has launched a crowdfunding campaign, and is co-hosting a fundraising event with the Greek Orthodox Community of South Australia.

It’s clear Greece holds a special place in Tsoulis’ heart. Born and raised in Adelaide, it wasn’t until the age of 24 that she finally visited her family’s village in the Peloponnese, and while she didn’t speak much Greek, she says she felt an instant connection.

“It was unbelievable – it was like I returned home; it was the most amazing feeling. Like the Aboriginals say ‘a connection to land’, that’s how I felt when I went to the village.”

And now she wants to give back by sharing Greece’s philoxenia with the world, and to set the record straight.

“What happened on Lesvos really captures the Greek spirit. We’re people that group together when you need it to combat any adversity. You see that in the Second World War; you have all different political persuasions working together, and once the crisis is over they go back to their factions of course, but that’s an element of the Greek culture that’s quite unique. Just as philoxenia is unique. And being the antithesis to xenophobia, people need to learn about it.”

When: Saturday 21 September, 8.00 pm-12.00 midnight
Where: Greek Orthodox Community of SA Inc., 288 Franklin St, Adelaide SA
Bookings: https://www.eventbrite.com.au/e/philoxenia-fundraiser-tickets-69386624261
For more information or for those who can’t make the event but would like to contribute, visit https://documentaryaustralia.com.au/project/philoxenia/