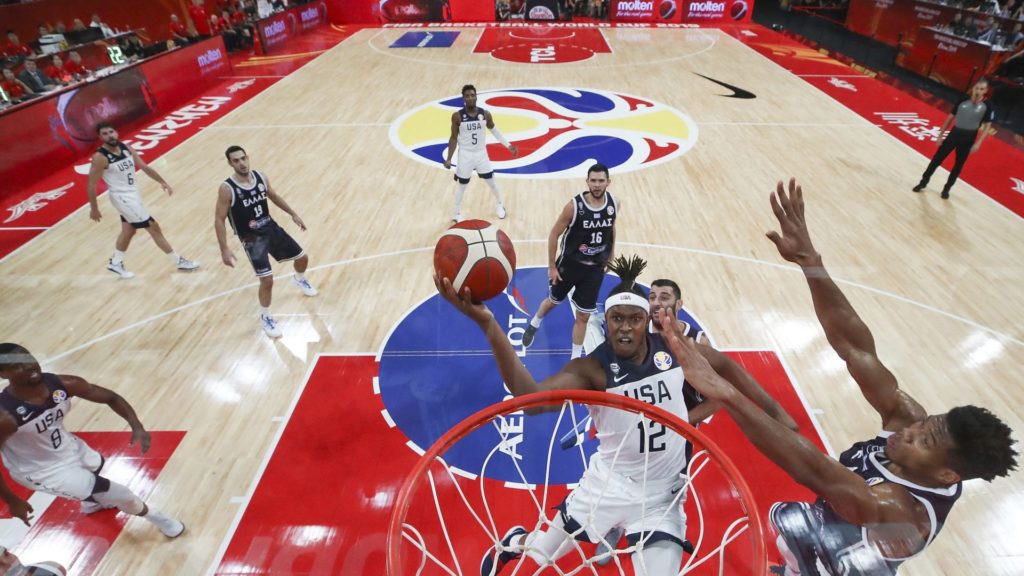 Myles Turner of the USA in action against Giannis Antetokounmpo of Greece, right, during the FIBA World Cup 2019 Group K match between USA and Greece at Shenzhen Bay Sports Centre, Saturday Sept. 7, 2019 in Shenzhen, China. Photo: Lintao Zhang/Pool via AP

Team USA clinched a spot in the quarterfinals of the FIBA World Cup match against Greece with a 69-53 win.

The NBA’s defensive matchup data shows that Smart has defended Antetokoumpo on 54 possessions over the past two seasons.

Tempers flared between Giannis Antetokounmpo and his NBA counterparts at the end of the game.

With 1:40 left to play, Thanasis Antetokounmpo hit Harrison Barnes, who had a free dunk from behind. Barnes was sent to the floor and a common foul was called to play.

READ MORE: For the love of Greece: Antetokounmpo would trade MVP win for Greece to win gold at World Cup

Barnes was not injured during the foul, but later said, “The game was over, probably a frustration play. Apologies only go so far. If I don’t get up and something would’ve happened, apologies aren’t going to help us in the next game. Luckily, everything is good.”

Jayden Brown and Giannis exchanged words that escalated so that referees and coaches came to break up their argument.

READ MORE: Team USA will meet Giannis Antetokoumpo, and there’s a chance that a plot may be brewing

Jaylen Brown and Giannis exchanging words.@FCHWPO after the game via @WindhorstESPN: “Yeah, I said something to Giannis. Well, Giannis said something to me. But we’ve got bigger fish to fry. So we move on.” pic.twitter.com/XOq52Qkjdp