The cold wintry morning in Ballarat was not enough to deter the more than 200 who made the journey to the city to witness the unveiling of the magnificent new memorial honouring one of Australia’s most famous humanitarians with a direct link to Greece. This is the first major memorial in Australia to honour George Devine Treloar and his refugee effort in Greece.

Ballarat-born Treloar is credited with assisting over 108,000 Christian refugees who were forced to flee their ancestral homes across Asia Minor in the wake of the catastrophe in the early 1920s. As the official League of Nations Refugee Commissioner in northern Greece, George ensured the survival of these desperate and almost destitute civilians, providing accommodation, food, health care and work. Some 13 new villages were established, one of which was named by Greece in his honour, the Thracian village of Thrylorion. It has been said that without his organisation and dedication, many of these refugees may not have survived.

It is fitting that Treloar’s new memorial in his birthplace should have been erected by the descendants of many of those whom he may have assisted. Litsa Athanasiadis, representing the George Treloar Memorial Committee, said that she felt a personal need to honour his memory.

“For those of us in Australia descended from Asia Minor refugees who fled to Greece, George Treloar and his work is symbolic of all those who assisted our ancestors to survive. Without people like George Treloar our culture, our grandparents, would not have survived,” she said.

The unveiling is the culmination of nearly five years work by the Committee, which has been raising awareness and funds for the project. Finally now, with the support of the Ballarat City Council and the creative work of sculptor Lis Jonhnson, the vision of the Committee has been realised.

The memorial which comprises a statue representing Treloar, with a small refugee child and parcel, atop a stone plinth with commemorative plaques affixed, is surrounded by a floral garden of red and white roses, from Victoria’s Treloar Roses Nursery no less. These roses will provide a fitting setting for the memorial, which represents survival and growth.

The statue is located in Ballarat’s Sturt Street (at the intersection of Errard Street) and is the first of Ballarat’s many statues to have been created by a female artist. The George Treloar Memorial stands alongside the other famous statues that have been erected on Sturt Street’s median strip, to Kings and Queens, poets and those celebrating soldiers connected to the City. The latter include the famous Anzacs Pompey Elliott and Albert Coates, fitting company for such an illustrious addition to the avenue of statues. Treloar was not only a humanitarian worker but also a highly decorated soldier who served in both the First World War and the Russian Civil War.

The unveiling itself commenced with addresses by Cr Samantha McIntosh, the Mayor of Ballarat; Dimitris Michalopoulos, Consul-General of Greece; the sculptor Lis Jonhnson; Catherine King, Federal MP for Ballarat; Litsa Athanasiadis and Penny Tsombanopoulos, representing the Merimna Pontian Kyrion pf Oceania; and David Treloar, representing the Treloar family. Throughout the ceremony, the new memorial was surrounded on each corner by representatives of Melbourne’s Pontiaki Estia in traditional dress, forming in effect a catafalque party.

Cr McIntosh congratulated the Committee for its foresight in proposing this memorial and saw it as a fitting addition to Ballarat’s commemorative sculptures. Mr Michalopoulos reminded the audience of the importance of Treloar’s help in the context of Greece’s situation at the time, having undergone 10 years of the ravages of war and the massive influx of refugees. Ms King pointed to Ballarat’s continuing tradition of supporting humanitarian work and aid to refugees. Ms Johnson thanked the Committee and the City for having faith in her and for giving her such a moving and important subject.

It was a great honour for the crowd to have amongst them many descendants of Treloar himself. David, the son of George, addressed the crowd on behalf of the family. He thanked all involved for honouring the work of his father and the family was truly humbled by this effort. He spoke of Treloar’s determination to do the right thing, having that very Australian quality of not respecting authority over-much. He saw a need and made every effort to address it. The event had had the added effect of bringing together many of the family for the first time in years. 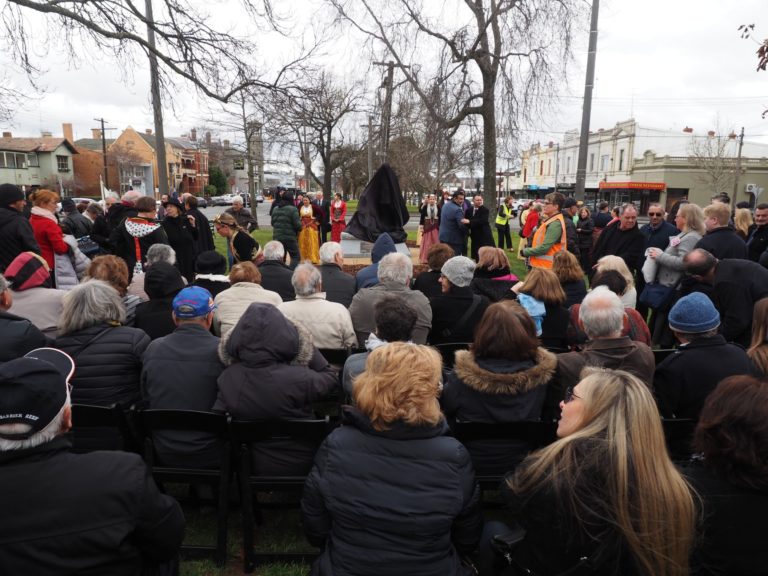 Some of the crowd who came to the unveiling. Photo: Jim Claven Following the addresses, Ms Athanasiadis and Cr McIntosh unveiled the statues and memorial to the approval and cheers of the assembled crowd. This was followed by a solemn dance performance by the Pontiaki Estia dancers, who in their dance symbolised their respect for Treloar and his refugee work. It was a blessing that, here in Ballarat, the weather might have been cold but the rain held off for most of the morning. And those drops of rain that did fall did not dampen the ardour of either the Pontiaki Estia dancers or the enthusiasm of the crowd.

Following the unveiling a reception was held at the recently renovated and re-opened Ballarat Civic Centre in Mair Street. Here the crowd enjoyed refreshments, including traditional Greek food. The whole event was topped off with a stirring exhibition of Pontian dance and music.

Konstantinos Kalymnios addressed the crowd on the importance of Treloar’s work to the survival of the Asia Minor refugees, basing his address on the theme of a Greek Orthodox hymn. Treloar had responded to their calls for help and protection; he had literally saved them in their hour of need.

It was my pleasure to speak on behalf of the Committee, recounting the journey to the memorial which began many years before. I talked of the former Victorian Minister John Pandazopoulos alerting us all to the writings on Treloar by the former Australian diplomat Hugh Gilchrist, of my own moving visit to Treloar’s village of Thrylorion in Thrace with John and Lee Tarlamis OAM many years ago, of John and Maria Salpigitidis’ journey to Ballarat to raise awareness of the need for a memorial, of Litsa Athanasiadis and the Pontiaki Estia and Merimna organisations taking up the challenge and forming the George Treloar Memorial Committee. I also talked about Treloar’s story as also being the story of how war calls upon ordinary people to do extraordinary things. He had been a civilian like the vast majority of Australian’s caught up in the First World War and he demonstrated not only personal bravery in war but a willingness to devote himself to the welfare of others. And for this he should be remembered. 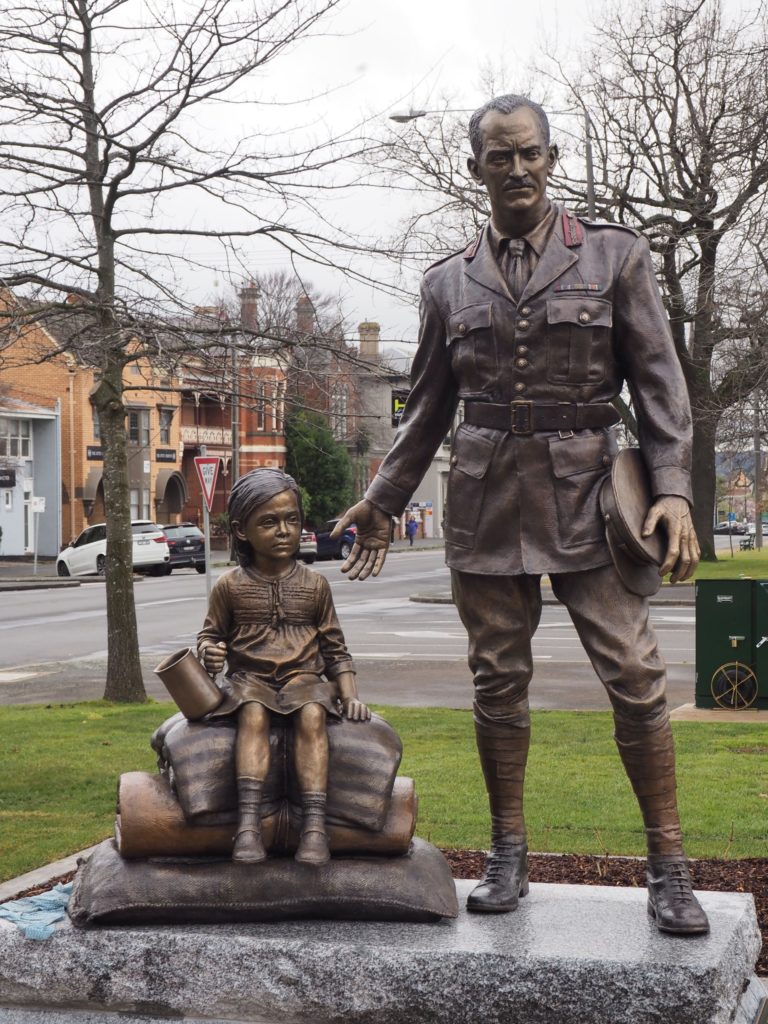 David Treloar takes the stage with the Pontiaki Estia dancers and members of the George Treloar Memorial Committee at the Ballarat Civic Centre. Photo: Kris Stamboulidis

On behalf of the Committee, Ms Athanasiadis thanked the major sponsors of the memorial – the City of Ballarat, the Merimna Pontian Kyrion pf Oceania, Central Pontian Association of Melbourne & Victoria Pontiaki Estia, the Panthracian Association of Melbourne, the Pancretan Association of Melbourne and Victoria, the Central Union of Elassona & Districts O Nikotsaras, The Greek Orthodox Community of Moreland, GVP Fabrications, Lithostone Quartz Surfaces and Marble Centre Exclusive – and the many other individuals who financially supported the memorial. She also thanked Con Tsepraildis, the President of Pontiaki Estia, and Penny Tsombanopoulos, the Public Relations officer of Merimna Pontian Kyrion of Oceania for their organisation’s support, as well as John Salpigtidis for bringing the George Treloar story to her attention in the first place.

She thanked the City of Ballarat for excellent organisation on the day, as well as all those who have supported the Committee’s work and those who made the journey to attend the unveiling. She encouraged all to return to Ballarat each year to take part in the annual commemorative service that is planned for the memorial.

* Jim Claven is a historian, freelance writer and Secretary of the George Treloar Memorial Committee amongst other roles. He can be contacted via email at jimclaven@yahoo.com.au