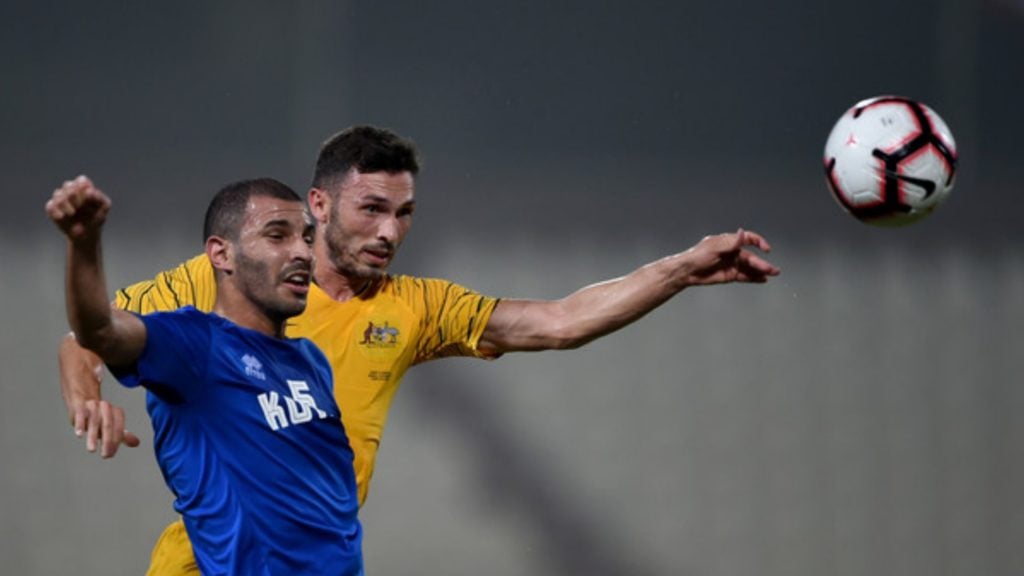 Apostolos Giannou (R) made an appearance off the bench for the Socceroos against Kuwait. Photo: www.zimbio.com

The Socceroos began their long journey to the 2022 World Cup qualification, on the good foot, in the Middle East on Wednesday morning with a 3-0 win over Kuwait.

All of the Socceroos’ goals came in an enterprising first half performance.

A first half brace from Matthew Leckie, and a goal from midfielder Aaron Mooy gave the Socceroos full control of the match going into the half time break. A disciplined performance in the second half saw them comfortably ease past the Kuwaitis.

Coach Graham Arnold appointed Leckie captain of the side in the absence of the injured Mark Milligan and Leckie responded with two goals, both of which he scored from inside the six yard box, following assists by Jackson Irvine, from Mooy set pieces.

The third goal was the most spectacular of the lot, coming from a Mooy first time shot from outside the box following an Adam Taggart assist.

Taggart started the match in the central striker position, flanked by Brandon Borello on the left wing,and Leckie on the right, in what was a new look attack for Australia.

James Jeggo also started, in the midfield anchor role in the absence of Massimo Luongo.

Cyprus based forward, Apostolos Giannou came off the bench in the 70th minute, together with Awer Mabil, as replacements for the tiring Taggart and Leckie, to inject fresh legs in the front third.

Socceroos boss Arnold said after the match, “I thought the first half was excellent. We came out with all intention to be on the front foot.”

“We pressed them very well, we worked them really well, we didn’t let them really have any chances, and obviously second half it was a bit less.

The mentality of the boys was fantastic, but in these conditions you could see the fatigue kick in and I thought the three subs that came on made a big difference.

“The energy that the young boys have brought into camp has been great. We had a number of inexperienced players out there that are gaining great experience here in the Middle East and it is a great start to the campaign.”

Man of the match honours was probably a toss up between Aaron Mooy and Matthew Leckie.

“He’s great, the passes that he sees and the things that he can do,”

You just even look at the fact that two of the goals were from great delivery of set-pieces.

“You know he adds so much to the team and he’s a joy to coach.”

The Socceroos next qualifying matches are two matches next month within a week, the first at home to Nepal (in Canberra on 10th October) followed by an away fixture against Chinese Taipei on the 16 October.