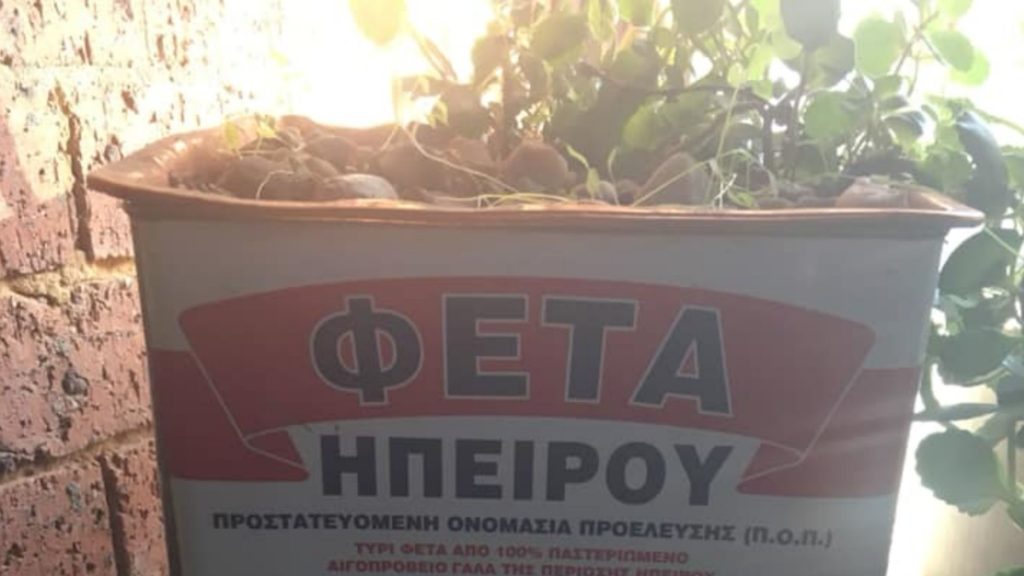 From Feta can to flowerpot.

A most singular happenstance befell me recently. Having inherited from my grandfather, the propensity, when all within the domestic abode and slumbering safely in the arms of Morpheus, to descend to the garage, there to survey my extremely modest collection of alcoholic libations, much as retired general reviews his troop of toy soldiers, I am wont, first sending a furtive glance around the room, for true pleasures should be experienced alone, to select a bottle, uncork it, raise it to my lips and take a good swig, possibly followed in succession by several more, depending on how deep my pondering over matters existential and terrestrial will probe, and whether room is required within my meagre storage facility for further receptacles. Otherwise, I sound, Walt Whitman-like, my barbaric gulps over the roofs of the neighbourhood and I am content.

On this particular occasion, musing over whether Socrates and his companions ever burped while discussing matters over wine during symposia, I was tracing my hand over the row of bottles absentmindedly, when I came across a 2004 dark green Pino Grigio. It startled me from my reverie. I was completely unaware that I had in my possession a wine of such a venerable vintage. Then and there I was overtaken by an irrepressible yearning to have it inside me. Accordingly, I screwed off the top and raising the mother of the bottle to my lips, began to quaff it eagerly.

A minute later, having drained half the bottle, I felt adamantine hammers pounding at my head, as if my grey matter was the anvil of Hephaestus. Furthermore, the passage the beverage took as it cascaded down my throat assumed the burning guise of a flow of molten lava. Not being able to scream, nor stand, I slumped upon the ground and immediately, was granted a vision of stark clarity. Clutching at my cranium in a vain attempt to stop the continental drift of its interlocking plates, I realised that far from being the Pinot Grigio of ancient provenance I so eagerly had anticipated, what I had just drunk, was an excessive quantity of a particularly nasty concoction that I was certain was methylated spirits, masquerading under the soubriquet of tsipouro, for deep, dark and unfathomable nefarious purposes.

Months earlier, an aged uncle had brought me some bottles of must from his own grapes and he had slipped in alongside them, a bottle of his most malevolent and violently intemperate home brew. In so doing, he defied convention, for it is a hallowed Greek-Australian tradition, that all tsipouro is contained and delivered to others in disused Red Label Johnnie Walker bottles. I have five in my possession at the moment. They reside in the pantry, in close proximity to the path of my nocturnal domestic perambulations. There is a serious school of Greek-Australian thought that holds that to deliver tsipouro in a wine bottle, as my uncle did, is heresy and the very act invalidates the nature of the spirit, so that it negates its own hypostasis, the inverse of the miracle at Cana.

The same convention prescribes that all olive oil must, upon being decanted from its original container, be housed in a two litre Malamatina Retsina bottle. Having been brought up by grandparents who arrived in this country prior to the commencement of the importation of retsina (we made our own from Mornington Peninsula pine resin), and who instead employed of a 1950’s McWilliams’ Sweet Sherry bottle as a worthy receptacle to contain their oil, I learned this the hard way. During a sleepover at a friend’s house, I was invited by my host to secretly sample his progenitors’ wines. I took hold of the Malamatina Retsin bottle and swallowed half a cup of Colossus cooking oil instead.

‘My Malamatina Retsina bottle currently contains ‘the good oil’, which friends supply direct from Kalamata. The ‘ordinary oil’ used to be kept in a Commandaria bottle, until one day, unbeknownst to me, my wife decided to use it as a fitting receptacle for her secret galaktoboureko syrup. Waking up one Sunday, I attempted to fry my offspring’s eggs in it, to less than popular acclaim and vociferous protests from the not so teflon-coated pan. My late grandmother avoided such concatenations of circumstances by actually labelling her bottles. Thus, the olive oil bottle was labelled in the Samian patois, ‘ΛΑΔ’. The vegetable oil, contained always in an old Bailey’s Irish Cream bottle, was labelled, ‘ΟΛΙΟΥ’ (ie Australian oil). This of course, if not heresy, is at least schismatic for Greek-Australians are expected instinctively to possess the requisite mindset that will enable them to always know what manner of liquid, suspension, colloid or other, any given receptacle in their custody, may contain.

For some aged Greek Australians, such games were as dangerous as Russian Roulette. One old lady I knew, would house vinegar in old plastic Varechina bottles, the Greek-Australian bleach of choice, and considering that her sense of smell was almost as non-existent as my own, one never knew whether she was about to bleach herself out of existence, or give her recently installed mission brown floor tiles, a sour bouquet. That same lady had in her garden, a most absorbing collection of plastic feta cheese containers, at the base of which she had drilled holes, using them as planter boxes. What was most fascinating about these, was the fact that the brands emblazoned upon the sides of the tubs never seemed to be available in stores and were unknown to all contemporary Greek food merchants. To this day, I am convinced that she was a clandestine member of a foreign cheese importation racket. 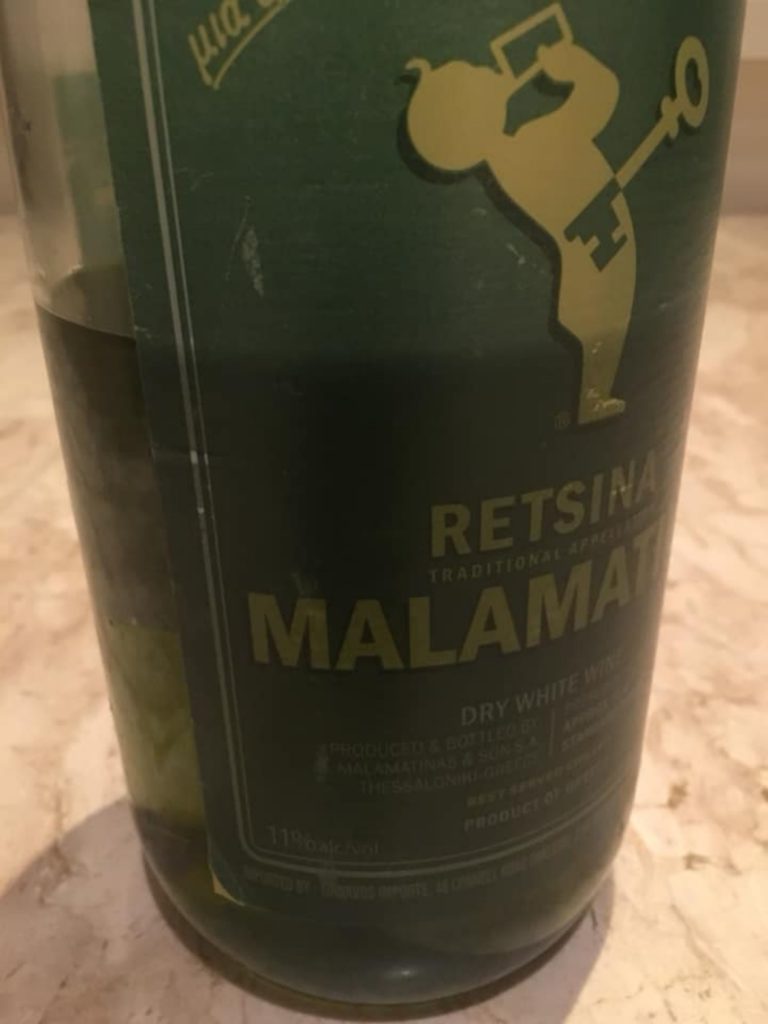 I harbour vague memories of elderly gentlemen in the early eighties, collecting VB long-neck bottles at compulsorily segregated name-day parties, where the ladies would be inside and the men occupied, in inclement weather, the garage. Those bottles were destined to be repurposed for the containment of lowest-grade home-made wine, the type considered of such negligible value, that it could be gifted to Italian neighbours in exchange for grappa, which was never drunk, but rather, either re-gifted to other Italian neighbours, or brought out for the consumption of the original donor when they would visit, while the Greek host would gleefully mumble under his breath, Latinate expressions such as ‘μπανάνες καλαμπρέζικες’, ‘κακάρε πανταλόνι’, and mention the war in almost every sentence.

I remember when Bushells Turkish Style Coffee ceased being the sole coffee of choice for Greek Australians, for this was around the time that keen apiarists would present us with locally produced honey contained in its sturdy, fluted jars. My late uncle, a most remarkable individual, had concocted an efficacious cure for the common cold, comprised of honey, tsipouro, tahini, thyme and a few other ingredients I am not at liberty to divulge for fear of perpetual haunting and damnation. This too was housed in a Bushells Coffee jar, next to the honey, providing endless possibilities for surprise. My wife, whose ability to diversify knows no bounds, sometimes deposits her secret galaktoboureko syrup in a Bushells Coffee jar as well, giving rise to dire maledictions against the vagaries of chance and the inventor of the Chaos Theory, when, upon one of my ritual midnight forages in the dark, I discern something that is not honey adorning my crumpet. Given that all forms of coffee except Papagalos have been expunged from our domestic diptychs for decades, the proliferation of Bushells Coffee jars within our pantry is an unsolved mystery that I am convinced, is connected to the continuous clandestine operations of the shadowy foreign cheese importers.

My grandmother always kept the Epiphany Holy Water in a Vanilla Essence bottle and I maintain this practice in her memory, producing a most spirited liquified blessing. The oil for the votive lamp on her grave, I keep in an old vinegar bottle upon which I have scrawled the words, ‘ΛΑΔΟΛΙΟ’ for it has at times housed both olive and vegetable oils and their residues remains forever commingled, in one physis and one hypostasis. To get to her grave, I have to pass that of an old neighbour. She has no tombstone yet, but beneath her wooden cross, are bushes of basil growing in old feta cheese containers. I have never seen their brands in the markets, no is any chesse-monger I know of, able to profess knowledge of their provenance. Stubs of burnt candles are shoved into sand at the bottom of an old Meadow Lea margarine container, bleached of colour, that can only date from the eighties, as it bears a stylised, faded depiction of Dorothea Mackellar and the words to ‘I love a Sunburnt Country’.
I trim the wicks and light the candles. I cast my eyes around the necropolis, desperately seeking a receptacle in which to contain my grief and find that I have legion. My sister stands nearby, holding an old Varechina bottle in which she has placed the soapy mixture with which we will wash our grandparents’ tombstone. I am consoled.